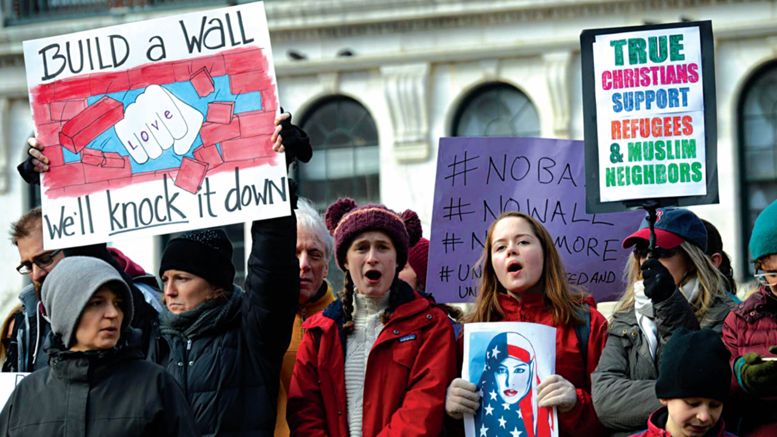 The Inauguration didn’t go so well for Donald J. Trump, at least not according to photos circulating widely comparing President Obama’s 2009 inauguration to Trump’s 2017 swearing-in. Reports from social networks, TV, web and print media took to the wire by firestorm. The photos originally came from the U.S. National Park Service Twitter account. It was retweeted as an observation from New York Times reporter Binyamin Appelbaum as he wrote: “Compare the crowds: 2009 inauguration at left, 2017 inauguration at right.” The tweet contained images from both events showing a very obvious difference in crowd size. Imagine, Trump and his entourage had said over and over via media coverage that the crowds were “huge,” using a word he’s most notable for overusing in his limited vernacular, even claiming to have drawn-in the largest crowd ever. However, CNN, along with various media cited approximately 250,000 attendees, a relatively small crowd for an initial inaugural event.

The next day, we marched.

Rising up against the Trump administration’s dismissal and mockery of women, our issues and reality of what this presidency means to us, we showed up in droves. Millions of women, girls and accomplices took to the streets across the globe to express not just solidarity in progressive ideals, but to represent a movement, a mobilization of people who stand for equality in support of marginalized communities—including women. These are the same marginalized communities that Trump venomously attacked throughout the campaign season—people of color, immigrants, members of the LGBTQ community, the disabled, Veterans, Mexicans, Muslims, blacks, etc.—and even worse post-election. What is worse is that he lost a real opportunity to address women and other disenfranchised groups’ concerns in lieu of this worldwide march. Trump’s response? It was mostly not a response at all to the giant crowds. He merely took to Twitter and asked “Why these people didn’t vote?” We did vote and you lost, according to our votes, Mr. Trump. But like you said throughout the election cycle, the system was rigged—in your favor.

No matter how much it was said, or the estimates on the size of the crowds nationally and internationally (over 3.3-4.6 million), still there was no expedient acknowledgment from this President about it, and when it did, it was in the form of a complaint. According to an editorial by the Boston Globe, “The Trump administration’s response, in contrast, was a juvenile outburst.”

Anyone would think that given his low #Inauguration numbers and approval rating—a historical low at just 40 percent when entering office—that he would have addressed the #WomensMarch happening around the nation and world differently. Yet, he continued to go on without addressing the issues that matter to the majority of the American people. How he has responded to the Women’s March on Washington and sister marches around the country and globe, has proven just how unfit he is to serve the people, all of us. TV Ratings, Twitter and Inaugural attendance were the primary focus over his first 72 hours in the Oval Office.

Little did we know at the time that his un-presidential response to the #Women’sMarch was just the beginning of his un-American worldly view of what was to come.

In an onslaught of executive orders in his first 10 days, the president seems to have forgotten that the United States is a democracy, not a dictatorship. The American people, we the people, will not lie down while human rights are under siege.

Just days after the Women’s March, Trump signed yet another executive order, plowing through the barricades and of democracy and violating the very Constitution he claims to defend when he banned citizens of seven Muslim-majority countries from entering the United States for the next 90 days, including refugees for the next 120 days. Protests have erupted throughout the nation and rest of the globe, yet again, to decry such an infringement of human rights and lack of basic compassion for those suffering. Not only did this order affect incoming refugees but also green cardholders, those that have been here on visa and were traveling back to the United States. Needless to say, all seven Muslim-majority countries that were “banned” from entry do not conduct business with the Trump conglomerates. Yet, none of the Muslim-majority countries that do business with the real estate mogul were banned. Coincidence? I don’t believe in them.

This inhumane ban also applied to those who were already en route to the U.S. However, large-scale protests erupted at airports across the nation after travelers were detained due to the ban. If it were up to Trump, he would have deported all travelers; even those who were refugees fleeing a war-ridden oppressive regime and when going back to their country of origin would likely result in death. After lawyers lined the country’s terminals, filing court petitions and advocating on behalf of those being held, a federal judge granted an “emergency stay for people who have already arrived in the United States, those who were in transit, and who hold valid visas, ruling they cannot be deported,” reported CNN. Already Trump has seen some limits to his assumed “power.” And, I can assume he will continue to be challenged.

Our efforts are not in vain as nationwide and global movements have sparked. Despite massive numbers participating in marches and protests worldwide, the next step in this demonstrative process is critical. We’ve proven that we can mobilize and organize. Now, what do we do with it? Strategy is pivotal in phase 2. One thing I know for sure is that complacency is not an option. Remember that revolution (#TheResistance) spoken about so fervently throughout the Democratic primary? It’s begun.

The messages in speeches throughout the country, the crowd numbers domestically and internationally, and the words and images depicted on demonstration signs paint a picture of the deep distress that the majority of Americans are facing. We are upholding the most consequential concern for the violation of human rights and of empowering ourselves through grassroots activism. The mere fact that we are rising to the occasion, demanding that the president is held accountable, refusing to allow disenfranchised groups to continue to be disenfranchised by our own government and that the world has joined in solidarity with us proves that we are on the right path. There is always strength in numbers. As the chant goes “the people united will never be divided.” The opposition is always loud—we have proved we can be louder. Onward!

*Nicole Lashomb is the Editor-in-Chief of The Rainbow Times, Salem No Place for Hate-Community Engagement Chair, and activist. She holds an MBA from Marylhurst University and a BM from the Crane School of Music. Nicole can be reached at editor@therainbowtimesmass.com.

Malcom Ribot: FTM Traveler Trailblazes a Path for Trans Men Across the U.S.