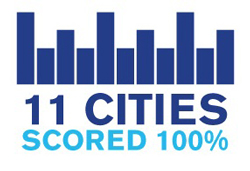 Boston and Cambridge score 100; Northampton & Provincetown not so. In this first of its kind nationwide evaluation of LGBT inclusion in municipal law and policy finds cities need to do more to protect LGBT employees and citizens

WASHINGTON — A new report on lesbian, gay, bisexual, and transgender (LGBT) equality in America’s cities by the Human Rights Campaign, the nation’s largest LGBT civil rights organization, rated 137 cities across the nation, including Boston, Cambridge, Northampton, and Provincetown. The Municipal Equality Index (MEI), the first ever rating system of LGBT inclusion in municipal law, finds that while many U.S. cities lag behind in protections for LGBT people, some of the most LGBT-friendly policies in the country have been innovated and implemented at the municipal level, including in states with laws that are unfriendly to the LGBT community. The MEI was issued in partnership with the Equality Federation Institute and the Gay and Lesbian Victory Institute. The average score for cities in Massachusetts is 82 out of 100 points, which exceeds the national average.  Boston and Cambridge both earned the perfect score of 100 points. Northampton scored a 64, and Provincetown a 59 (page 20).

Key findings from the MEI create a snapshot of LGBT equality in 137 municipalities of varying sizes drawn from every state in the nation – these include the 50 state capitals, the 50 most populous cities in the country, and the 25 large, 25 mid-size, and 25 small municipalities with the highest proportion of same-sex couples.

Boston and Cambridge and the other 100-point cities in the MEI serve as shining examples of LGBT inclusivity, with excellent policies ranging from non-discrimination laws, equal employee benefits, and cutting-edge city services. As America moves forward in support of LGBT equality, cities across the country are on the forefront of this movement.  Cities in every region of the country are fighting for equality at the most intimate level of government.  At the same time, cities across the country also have room for improvement.  The MEI articulates a path forward and celebrates the success of cities doing this important work.

MEI at a glance:

The MEI rates cities based on 47 criteria falling under six broad categories:

In today’s world, cities must compete for business and brain power.   Research shows that to do this, they must treat their LGBT citizens with dignity and respect. Acclaimed Professor Richard Florida authored the forward for the MEI. Professor Florida is a pioneer in research into how the nurturing of a “creative class” (entrepreneurs, artists and architects, researchers, scientists, engineers, and other professionals) creates prosperous, economically competitive cities.

“Here in Massachusetts, we have a long and proud tradition of advancing equality,” said Kara Suffredini, Executive Director of MassEquality. “Many of those advances took place early on in city councils and municipal administrations.  As Massachusetts worked to make history as the first state with marriage equality and an LGBT Youth Commission, and as we advocated for our transgender equal rights law, we realized that this work could not have happened without the foundation of equality already created by many of our municipalities.  We are looking forward to having the MEI as a valuable tool for advocates, policymakers and residents alike.”

“Our nation is on an irreversible path forward in LGBT equality and local and state-level advocacy ensures our voices are heard in public squares across the country” said HRC President Chad Griffin. “This index gives advocates and municipal lawmakers a potent tool to improve the lives of LGBT people.”

“Advances at the local level are often unheralded, but they are critical to building the momentum we need for statewide and federal victories,” said Rebecca Isaacs, Executive Director of Equality Federation Institute. “The Municipal Equality Index not only recognizes the remarkable progress that state equality groups and local partners have made in cities and towns across the country, but is a powerful tool to help push local governments to do better.”

“The freedom to be ourselves is most important where we live, work and raise our families.  That’s why it’s so crucial that local and municipal governments understand the need to make life better for LGBT people. We work hard to make sure openly LGBT people participate in government as elected and appointed officials, and the MEI will be a great resource for them,” said Chuck Wolfe, president and CEO of the Gay & Lesbian Victory Institute.

The full report, including long form scorecards for every city and a searchable database, is available online at www.hrc.org/mei.