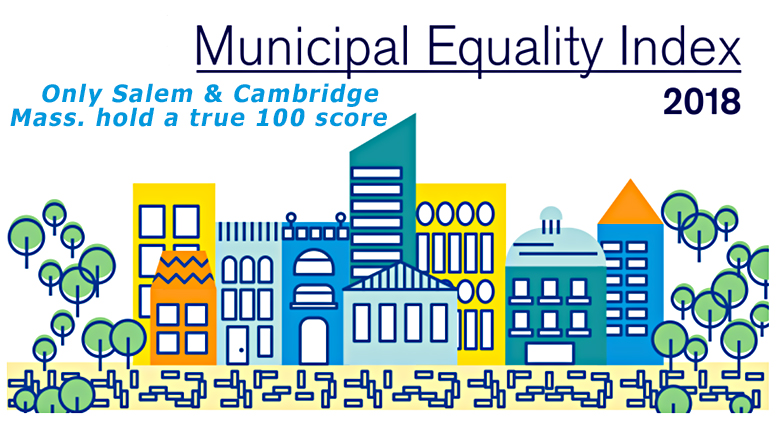 The Municipal Equality Index shows that only 2 cities, Salem and Cambridge, hold a perfect score (no added bonus point) in Massachusetts; extend vital protections to their LGBTQ citizens and visitors

The 2017 Municipal Equality Index, the only nationwide rating system of LGBTQ inclusion in municipal law and policy, shows that cities across the country, including in Massachusetts, continue to take the lead in supporting LGBTQ people and workers—even in the face of renewed attacks this year on the LGBTQ community by federal and state officials.

For LGBTQ Americans, legal protections and benefits vary widely depending on location — states and cities have markedly different laws governing discrimination. 21 states have non-discrimination laws that include protections for LGBTQ people in employment, and 20 states have laws that protect LGBTQ people from discrimination in places of public accommodation. But cities are leading the way: since the MEI’s debut in 2012, the number of cities earning perfect scores has increased more than sevenfold, and today at least 25 million people live in cities that have more comprehensive, transgender-inclusive non-discrimination laws than their state.

The average score for cities in Massachusetts is 88 out of 100 points, which falls above the national average of 58.

“From San Antonio, Texas to Brookings, South Dakota—this year’s MEI again proves that there are no barriers to municipal LGBTQ equality for a city with dedicated, pro-equality elected officials,” said HRC President Chad Griffin. “Forward-looking leaders across the U.S. are stepping up, protecting their youth from so-called ‘conversion therapy,’ increasing anti-bullying protections, ensuring transgender city employees have access to inclusive health care benefits and protecting LGBTQ people from discrimination in all areas of life. As we approach one of the most critical elections of our lifetimes, it is incumbent on all of us to make sure that we help elect more leaders across the nation who share this uncompromising commitment to equality for all.”

“In this political moment, as we face unprecedented challenges to fairness, justice, and democracy at the federal level, we look to local leadership to advance equality for the LGBTQ community,” said Rebecca Isaacs, Executive Director of the Equality Federation Institute. “Equality Federation is committed to our partnership with HRC on the Municipal Equality Index because it sets a bar that most localities want to reach.”

Since the MEI’s debut in 2012, the number of cities earning perfect scores has increased by more than sevenfold, and today at least 25 million people live in cities that have more comprehensive, transgender-inclusive non-discrimination laws than their state.

Progress on transgender equality has been particularly noteworthy in cities across the U.S. this year, continuing a positive trend that the MEI has tracked—and encouraged—since 2012. Transgender-inclusive healthcare benefits are offered to employees of 147 municipalities this year — up from 111 in 2017, 66 in 2015 and just five in 2012. The MEI’s Issue Brief on Transgender-Inclusive Health Benefits is available here.

Other key findings from the 2018 Municipal Equality Index include:

The MEI rated 506 cities including the 50 state capitals, the 200 largest cities in the United States, the five largest cities or municipalities in each state, the cities home to the state’s two largest public universities, 75 municipalities that have high proportions of same-sex couples and 98 cities selected by HRC and Equality Federation state group members and supporters. It assesses each city on 49 criteria covering citywide nondiscrimination protections, policies for municipal employees, city services, law enforcement, and city leadership’s relationship with the LGBTQ community. This year’s report also includes two new issue briefs for policymakers: Addressing the Unique Needs of LGBTQ Older People andWorking Toward a Fully-Inclusive Municipal Workplace.

The full report, including detailed scorecards for every city, as well as a searchable database, is available online at www.hrc.org/mei.

The Human Rights Campaign Foundation is the educational arm of America’s largest civil rights organization working to achieve equality for lesbian, gay, bisexual, transgender and queer people. HRC envisions a world where LGBTQ people are embraced as full members of society at home, at work and in every community.