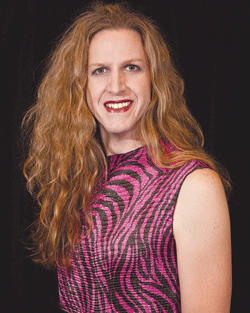 By: Lorelei Erisis*/TRT Columnist–
Sometimes these columns get written in the strangest places. This one was actually written on a Greyhound bus from NYC to Springfield. I was in New York to perform in a production of “The Vagina Monologues” at 4th U, a Unitarian Cathedral on the Upper West Side once frequented by the Carnegies. It was a benefit being produced as part of a nationwide event called “V-Day,” in which cities all over the country put on “The Vagina Monologues” for charity.

It was really an amazing production and I felt honored to be a part of it. Not to mention the chance to perform for the first time in New York City!

It did get me thinking though, quite a lot really, about the experience of being trans and being accepted by other women, as well as by society in general. It can be enormously nerve-wracking, especially for an “out” transsexual.

It often feels as if I am being held to a higher standard of “woman-ness” than cisgender women. I constantly feel as if I have to prove myself, justify myself. Fortunately, I’m pretty outgoing most of the time, but still it can be enormously stressful.

Most of the time, women are pretty accepting of me. But even then there are sometimes surprising limits. I am a woman up to the point that it becomes inconvenient or uncomfortable. There’s almost a wink and a nod. “Of course you’re a woman, absolutely! Wink, wink, nudge, nudge.”

It’s the kind of attitude transwomen encounter with the Michigan Womyn’s Festival. Often, the women who have that attitude don’t even seem to realize they are entirely negating our gender. My gender. Saying that we’re not really women. It happens most often when it comes to entry into “women only” spaces.

I always want to scream and throw things when I encounter this attitude. And say that, yes, really, I am a woman! Not kind of, not sort of, but actually a bona fide woman who happens to also be transsexual!

So, it was with some trepidation that I decided to audition for “The Vagina Monologues.” Even though the call I got was specifically for transgender women, I was still nervous.

Not that being nervous often stops me. So my friend Tammy and I drove down to NYC.

As a transgender woman I’m always making all these calculations and social estimates in my head. What kind of women were these going to be? Would they judge me harshly if I dressed too femininely? Was it OK to wear a skirt or should I opt for jeans? And what if I didn’t look feminine enough? Makeup or no makeup?

I usually don’t wear jeans and T-shirts out because I often end up getting called “sir” all day if I don’t push my look a little extra feminine. Baggy clothes and winter layers are a nightmare. I’ve even had people call me “sir” while they were staring at my breasts! “Listen, you get to stare at my breasts or call me sir, you don’t get to do both!”

As a result, my look is often a little extra femme. But groups of women, most especially feminist-minded women, sometimes seem to judge this. They ask why I don’t wear jeans. Why in Goddess’ name would I wear skirts?

It was an audition though, so I put on some makeup and dressed nicely. Much to my surprise, Tammy and I and one other transwoman were the only ones who came for the audition.

The women thankfully were all very nice, but even so I had my gender very politely questioned by a couple of parishioners who were at the church for services. Answering people’s questions about trans stuff is kind of what I do. So I politely answered questions and then put my all into the audition.

It went very well, I’m pleased to say. They were excited to have Tammy and me be part of the cast. But still some nervousness remained. I talked Tammy’s ear off in the car on the way back. They all seemed nice, but would they turn on us if we said the wrong thing or looked the wrong way? And for me, what if they found out I don’t yet have a vagina of my own? I mean it’s called “The Vagina Monologues”! Would they only accept me as sort of a woman?

It’s a wonder Tammy didn’t slap me. I was so neurotic I felt like a female Woody Allen.

None of these things happened, though. The rehearsals went well and by the time we did the show, I had gotten over my initial trepidation. All the talk of vaginas and the power of women got to me in a very positive way. My fears melted and by the time we got to doing the flash-mob opening of the show on Friday night, a piece called, “Over It,” as the house lights dimmed and I sat on stage with my fellow cast members, I knew that these were women I could honestly call sisters.

For all my nervousness about my transgender identity, my transsexual history, I was not the “other.” I was surrounded by women who had no question that I was indeed one of them. I was a Vagina Warrior!

So to answer a question I am asked far too often — the persistent “are you really?” question — I am now, have always been and always will be, A Woman. And if you don’t believe me, ask one of my sisters!
Slainte!

Faith, God and Family: The Lord’s Prayer for LGBTQ Persons of Faith

1 Comment on "My experience doing ‘The Vagina Monologues;’ A Vagina Warrior, I was"