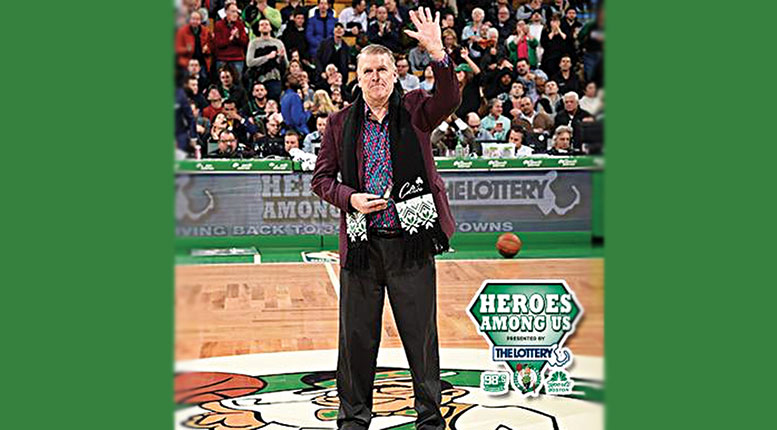 SALEM, Mass.—A local Salem leader recently received a recognition award in Boston given to those doing extraordinary things and making an impact in their community, according to Boston Celtics’ officials.

At the Celtics’ first annual pride night, held at TD Garden, Steve Harrington, Executive Director, North Shore Alliance of GLBTQ Youth (nAGLY), received the “Heroes Among Us” award for his relentless work with the organization.

“It was very humbling to be recognized for my work with nAGLY youth,” said Harrington. “Although the work is tremendously rewarding, it’s also daunting and overwhelming at times, especially in these difficult fundraising times … it was surreal to be honored for my efforts in the world of gay basketball. I never could have imagined a day would come when LGBTQ sports would even gain mentioned in mainstream society.”

The NBA has a long history of advocating for the rights of the LGBTQ community. They did it when the league pulled the 2017 All-Star Game out of Charlotte North Carolina because of its objection to a North Carolina law that limited protections for the LGBTQ community. They also were the first sports organization to march in the New York City Pride Parade and their support of the coming out story of player Jason Collins was widely celebrated across the country. The organization has been vocal in the battle for social justice equality on nearly all fronts. It was only a matter of time before the Boston Celtics brought it to their home turf too.

“Since 1982, Steve Harrington has competed in every Gay Games & won multiple basketball gold medals,” read the Celtics Twitter feed. “Determined to make a difference off-court, our _Mass. State Lottery_ “Hero Among Us” began volunteering at nAGLY, empowering over 19K LGBTQ youths in Boston over 11 years!”

“I so much wanted to grab a mic and ask people to sign up for our Campaign for 1000,” Harrington said referring to a current fundraising effort for the youth organization. “With more than 18,000 in the audience, we could have reached our goal in one night!”

To continue the ongoing rate of acceptance of the LGBTQ community, Harrington encourages others to come out.

“I still think there’s a massive underestimation of the impact and participation of LGBTQ athletes, on every level, in every sport, and on every continent,” he said. “Until the general population sees some of these athletes play, I think the misconception will remain. It’s going to take more and more people coming out during their prime years for mainstream to change its perceptions.”

Though the award has left Harrington a “bit gobsmacked,” he focused the honor and its message on the collective that he is so impassioned by and serves day in and day out.

“One of the mainstays of my philosophy is that nothing is off the table when it comes to fulfilling dreams,” he said. “I look back on my years as a youth and remember the darkness I thought would follow me. I simply could not imagine anything approaching a fulfilling life. I could not have been more wrong. My hope is that LGBTQ youth can take some of this honor with them, and help them achieve whatever dreams they have.”

To learn more about nAGLY or to get involved in their Campaign for 1000, visit the site at https://is.gd/z46hbh.