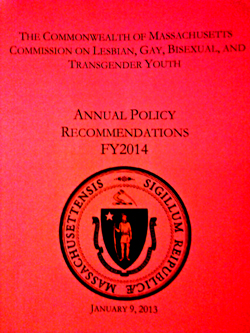 BOSTON, Mass. – A dedicated group of leaders was welcomed to the Massachusetts State House, on January 9, to be sworn in to the Massachusetts Commission on LGBT Youth. The ceremony was held at 3:00 p.m. in hearing room 222, which was quickly filled by the multitude, including the families, friends, and colleagues of the new commissioners. The ceremony began with Julian Cyr, chair of the commission, welcoming guests and appreciating the support of government officials. Cyr expressed sincere gratitude to Governor Patrick, saying “[he] has been an invaluable partner in our work.”

Cyr, joined at the podium by co-chairs Erika Rickard and Alexis Yioulos, then discussed the issues that LGBTQ young people throughout the Commonwealth and across the nation face, such as disproportionate homelessness, bullying, and suicidal behavior. Cyr recognized that “LGBTQ youth of color are at high risk” of facing these issues. Rickard and Yioulos spoke of the necessity for “sensitivity training” for educators, administrators, and employees of health/human services organizations. They explained that the commission’s work will center on access, training, and policy recommendations. It was emphasized that these recommendations can be implemented at little or no cost. For example, the commission is working closely with Mitchell D. Chester, commissioner of elementary and secondary education for the Massachusetts Department of Elementary and Secondary Education, to “develop guidance” for schools.

Governor Patrick was introduced by Cyr as a leader who is “unparalleled in LGBTQ equality issues.” In his speech, the governor remarked, “You should all take note of my presence and that of so many of my colleagues from the legislature, that you have friends in the State House.” Rep. Fox, Rep. Forry, Rep. Honan, Sen. Eldridge, and Sen. Keenan, among several others, were in attendance. Dan Burgess, the legislative director for energy at the Massachusetts Executive Office of Energy and Environmental Affairs (formerly the regional field director of Obama for America) stood near Gov. Patrick’s daughter, Katherine Patrick, as the oath was recited. Katherine was photographed with several new commissioners, as her father shook hands with each.

Though the governor did admit to not having a full understanding of certain issues, specifically those which affect transgender individuals, he said “I want to learn. We want to learn.” It was a poignant statement that resonated with the large crowd. To aid attendees in learning more about the commission’s intended work, many copies of the annual policy recommendations booklet for the 2014 fiscal year were available.

The Commonwealth of Massachusetts Commission on Lesbian, Gay, Bisexual, and Transgender Youth is an independent agency, established by law, with the purpose of making recommendations to every branch of state government and advocating for that which promotes thriving in the LGBTQ youth community.