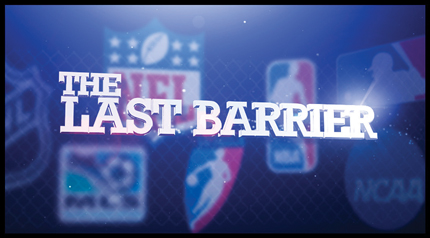 “The Last Barrier” includes additional comments ranging from a wide variety of people in the sports industry, from players like Chris Kluwe, Minnesota Vikings Punter, to Rick Welts, the President and Chief Operating Officer of the NBA’s Phoenix Suns.

“The goal of the show was to generate discussion … amongst the viewers after they watch the show. I think that’s the most you can ask for. Then hopefully discussion will lead to people examining their values, and their feelings,” said Ted Griggs, Comcast SportsNet Bay Area President.

The documentary itself came about through an already existing partnership – Comcast SportsNet Bay Area produces a show for NBC Bay Area that airs after Sunday night football games. It is traditionally a half-hour segment that discusses issues in sports, but when they tried to conquer the topic of sexuality, it became apparent that 30 minutes was not going to be sufficient, explained Griggs. NBC then agreed for a full-hour piece, and the show cast Comcast SportsNet anchor Dave Feldman, CSNBayArea.com’s Senior Insider Ray Ratto and Comcast SportsNet’s MLB analyst Shooty Babitt as hosts.

“The people are great. Comcast SportsNet works with the [LGBT sports organization] You Can Play project, and they’ve made a real commitment to helping end homophobia in sports,” said Cyd Zeigler, Jr., the Co-Founder of Outsports.com, the self-proclaimed worldwide leader in gay sports.

With over a decade of experience in the LGBT sports industry, Zeigler was selected as one of the documentary’s guests. Although he personally enjoyed his interview experience, he did not agree with all of the perspectives given on “The Last Barrier.”

“Shooty Babitt, this one guest they had on, really just doesn’t know what he’s talking about, you know? He’s talking like it’s still 1979 and he’s playing for the Oakland A’s. I mean, it was a different perspective to include, it was interesting that they chose him,” said Zeigler in a phone interview.

Host Babitt is a former New York Met’s scout, Oakland A’s baseball player and friend of openly gay MLB player Glenn Burke. Zeigler was frustrated with some of Babitt’s commentary, like the excerpt below.

“You have a guy that needs to come out and let everybody know who he is. But you know it’s going to be to a detriment to the team because now everybody else gets involved, everybody else has to answer all these questions that they probably shouldn’t have to answer because someone has an agenda that they want the world to know about, rightfully so, but I just don’t think this is the setting when you’re talking about a team sport,” said Babitt in “The Last Barrier.”

Although an upsetting response to some, Griggs believes that it’s important to try produce a fair and balanced documentary. “… you have to be careful to not be an advocate, even though we all have our own personal feelings about this topic. You have to sort of put the canvas out there and let people give their opinions,” he explained.

“The Last Barrier” will air on NBC Bay Area throughout January, and is available on Comcast SportsNet Bay Area via DirecTV and Dish Network’s sports packages.