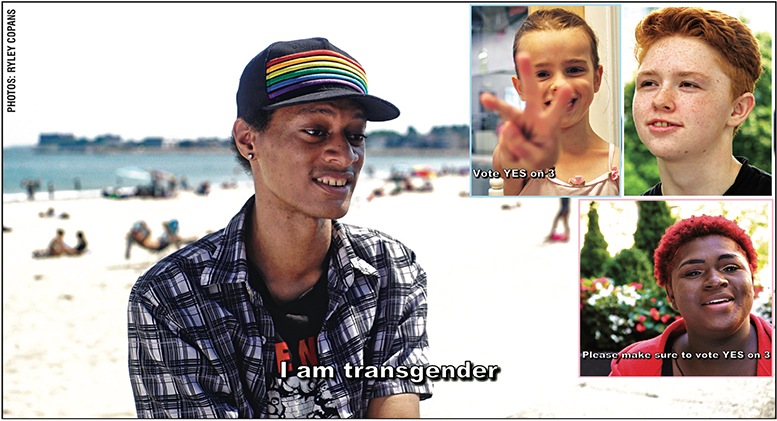 Ryley Copans has a simple question to ask.

“We really needed a study?”

Ryley’s question is in response to a recent study by the Williams Institute, a California-based think tank. At the beginning of September, the institute released a report validating what many LGBTQ activists consider common sense: there’s no data to support the contention that allowing trans people to use the restroom that most closely aligns with their gender identity will lead to an increase in sexual violence against women and children.

“Gender Identity Nondiscrimination Laws in Public Accommodations: a Review of Evidence Regarding Safety and Privacy in Public Restrooms, Locker Rooms, and Changing Rooms” examined criminal record data across Massachusetts to explore whether there was an increase in acts of sexual misconduct on behalf of trans people in public spaces.

“Results showed that immediately after the laws’ passage, there were fewer incidents of privacy and safety violations in places with gender-identity inclusive public accommodations laws than in comparable areas without the laws,” read a portion of a press statement on the report.

The “law” referenced in the statement is the landmark 2016 bill that amended the public accommodations statute to include gender identity, a move that many conservative advocates said would lead to an increase of sexual violence against women and children in public restrooms.

July 2016 saw Massachusetts Governor Charlie Baker sign the amended public accommodations bill into law. The road to the bill’s passage and signing was paved with a years-long struggle by LGBTQ activists to educate the public about trans identities while simultaneously lobbying state legislators on the bill.

“Today is a huge victory for civil rights and for our transgender friends, family, and neighbors,” said Massachusetts Attorney General Maura Healey, a long-time outspoken supporter of the bill, in a press statement released on the day it was signed into law. “So many people have spent years advocating, educating and fighting for equality, and now these important protections will be extended to everyone. We have transgender children and their parents, in particular, to thank, for bravely sharing their families’ stories and for persisting in their mission to end discrimination in public places.”

An earlier version of the public accommodations law passed in 2011 included gender identity as a protected status in a range of areas, including employment, housing, and education. However, legal protections in public settings such as parks, public transportation, and malls were excluded. This noticeable exclusion was largely attributed to public safety concerns around sexual predators and conservative messages that criminalized trans people.

Members of the trans community were forced to live, work, and visit the Commonwealth knowing that their right to work in public settings such as coffee shops, restaurants, and grocery stores were protected, but their right to be served as customers in those settings was still in jeopardy. This irony was often used as a justification by advocates as to why the law needed to be fixed.

In the five years between the signing of the 2011 law and the 2016 law, a rejuvenated coalition was formed to advocate for the explicit protection of trans people in public settings. The Freedom Massachusetts coalition grew to include advocates, non-profits, faith leaders, businesses and many other parties interested in amending the law. After years of advocacy, the coalition won a massive victory at the State House when the bill was voted successfully out of the state legislature and sent to Gov. Baker’s desk.

Advocates, however, only received a short reprieve as conservative activists mobilized their base by collecting signatures to put the bill on the 2018 ballot for a public vote. That vote will be on November 6.

Freedom Massachusetts now identifies as the Yes on 3 Coalition, and has engaged in a massive public campaign to inform voters about the ballot question and why voting “no” would be an attack on civil rights.

Do you approve of a law summarized below, which was approved by the House of Representatives and the Senate on July 7, 2016? reads ballot question 3, which then goes on to summarize the 2016 law. A “yes” vote means that the law should remain in place while a “no” vote means that it should be appealed.

The early September release of the Williams Institute report was a much-needed boost for the campaign and went a long way in providing data disproving common misconceptions around transgender people and their use of public facilities.

“The Williams Institute study underscores what we already know—that there is absolutely no link between sexual predators or other offenders and transgender people in any public spaces,” said Deborah Shields, executive director, MassEquality, an LGBTQ advocacy organization and member of the Yes on 3 coalition. “We’ve lived with this law in Massachusetts for over two years now and there has not been a single instance of misconduct by a transgender person in public spaces. Many other states, cities, and towns have lived with similar laws on the books for many years now and there’s just no connection between these basic civil rights laws and sexual misconduct.”

Mason Dunn, executive director of the Massachusetts Transgender Political Coalition (MTPC), a member of the Yes On 3 coalition, said that keeping the 2016 law intact bolsters public safety all around.

“ … transgender rights have no negative impact on public safety. In fact, we know that nondiscrimination laws, like what we passed in 2016, make Massachusetts safer for all people, including transgender people,” he said.

“I am an animal lover, an artist, and a student living in Massachusetts, and I am transgender”

Copans decided to make a film in support of the Yes On 3 campaign, specifically using it as an opportunity to center the voices of trans youth. Titled, “#YESon3MA: Trans Youth Share What Question 3 Really Means,” the documentary allows young people to define themselves on their own terms outside of their gender identities.

“[The film] highlights an intersectional, inclusive group of four transgender youth living in Massachusetts,” they said. “The theme that ties the video together is the youth’s ‘I am’ statements, defining themselves by parts of their identities that are important to them, as well as their favorite activities. These statements are voiced over shots of them engaging in these activities.”

By way of example, a young teenage trans youth plays with a puppy on the Boston Common and declares, “I am an animal lover, an artist, and a student living in Massachusetts, and I am transgender.”

“The ‘I am’ statements are tied back to the fact that Question 3, public accommodations, is about more than just bathrooms; it’s about transgender and gender non-conforming people’s right to go to a restaurant, a theatre, sit in a public park, walk down the street, to exist in and engage with the world around them,” Copans continued. “The angle of this video is to demonstrate precisely this through showing these young people engaging in their everyday activities.”

The film premiered on September 28.

According to GLBTQ Advocates and Defenders (GLAD) Executive Director Janson Wu, the study addressed a common myth about trans people sexual violence, which is why the ballot question has such significant support.

“We all value safety, and this study shows why safety advocates, including sexual assault victims advocates and law enforcement, fully support keeping our transgender nondiscrimination law in place and maintaining dignity and fairness for all in Massachusetts by voting Yes on Question 3,” he said.

With November 6 steadily approaching, Copans is optimistic that passage of the ballot question will not only help trans people in the Commonwealth but across the nation.

“Massachusetts’ public accommodations legislation remaining in place once again brings Massachusetts center stage as a leader, and I truly believe that when we keep our gender identity-based protections here, we will be able to bring the rest of the country with us.”

[This exclusive story was originally posted on the October 4, 2018 issue of The Rainbow Times].