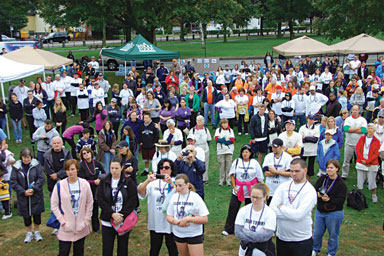 BOSTON, Mass.—Throughout the months of September and October 2013, the American Foundation for Suicide Prevention (AFSP) Massachusetts Chapters will host six Out of the Darkness Community Walks in Boston, Wakefield, Haverhill, Worcester, Buzzards Bay, and Springfield, as part of their national efforts to raise funds for suicide prevention, advocacy and education.

“I lost my brother, Michael Farrell, to suicide 21 years ago, after a severe depression,” said Nancy Farrell, AFSP chair of the public policy committee, national chair elect and long-time Boston board member. “My family found a support group whose leader was involved in AFSP. My mother became chair of the NJ chapter, where most of my family lives, and I volunteered for the Boston Chapter. Working with people who understood my family’s experience and wanted to prevent suicides was very important to me.”

In addition to raising money, the purpose of the Out of the Darkness Walks is to bring people together who have lost loved ones to suicide. According to AFSP, over 4,000 people walked to prevent suicide in Massachusetts in 2012, raising over $500,000. The goal for 2013 is to have 5,000 walkers and raise a total of $600,000 from all six Walks. [pullquote]AFSP has funded many studies looking at suicide risk among LGBT youth and interventions, and Gebbia said that several studies show LGB youth attempt suicide four to six times more than heterosexual youth. There has been little research yet conducted on rates among transgender youth. [/pullquote]

According to Executive Director Robert Gebbia, AFSP launched their LGBT Suicide Prevention Initiative in 2007 along with the Gay and Lesbian Medical Association, and they have collaborated with organizations such as GLSEN, GLAAD, The Trevor Project, PFLAG, HRC, and the Task Force. AFSP has funded many studies looking at suicide risk among LGBT youth and interventions, and Gebbia said that several studies show LGB youth attempt suicide four to six times more than heterosexual youth. There has been little research yet conducted on rates among transgender youth.

“Suicide is a national health problem, and one that can be prevented,” said Gebbia. “But we need more research, education, awareness and advocacy. This is even more true for addressing suicide among LGBTQ individuals, since there is currently no data on completed suicides and there is a serious lack of research, especially for suicide risk among LGBTQ adults. This is an issue that is greatly affecting the LGBTQ community and much more needs to be done to address this important issue.”

Farrell shared that The Boston Chapter of AFSP hosted the first ever LGBT Suicide Prevention Symposia in June 2011 at Bentley University. She said the goals of the conference were to reduce stigma around the LGBT community seeking mental health services when they are needed to reduce the risk of suicide, and to support public policy funding necessary for research and advocacy to change laws and regulations that create inequality based on sexual orientation or gender identity.

According to Farrell, AFSP will use this conference model to host similar events around the country. The New York and Chicago Chapters held two conferences in 2013, and plans for an LGBTQ conference in Los Angeles and another in Boston are in the works for 2014.

AFSP also partnered with a number of organizations to produce the document “Talking about Suicide and LGBT Populations.”

Farrell said the Walks help bring visibility to their cause and efforts, and that the issue of suicide has largely been hidden, but that is starting to change.

“One of AFSP’s primary goals is to reverse the rate of suicide, which has continued to rise,” said Farrell. “The solutions are complex, involving more research, better treatments, better understanding of how we identify suicidal people, and understanding any issues that impact some groups—such as LGBTQ—more than others. Progress depends on being open about the illnesses that cause suicide, such as depression and bipolar disease, so they can be treated. We don’t invest nearly enough in research as a nation, and we need more therapists and social workers who are culturally competent across the spectrum to improve treatment and make it more widely available.”

The Massachusetts walks will kick off with the Central MA/Worcester Walk on September 21 and will finish on October 12 with the Boston Area Walk. In addition to these events, Diva’s NightClub in Northampton is hosting its second annual Drag Show to educate and create awareness about LGBTQ and suicide on October 12 at 7 p.m. For more information on all of the MA walks, visit afsp.donordrive.com.

1 Comment on "Out of the Darkness Walks Raise Funds, Awareness for Suicide Prevention, for LGBTQ people too"