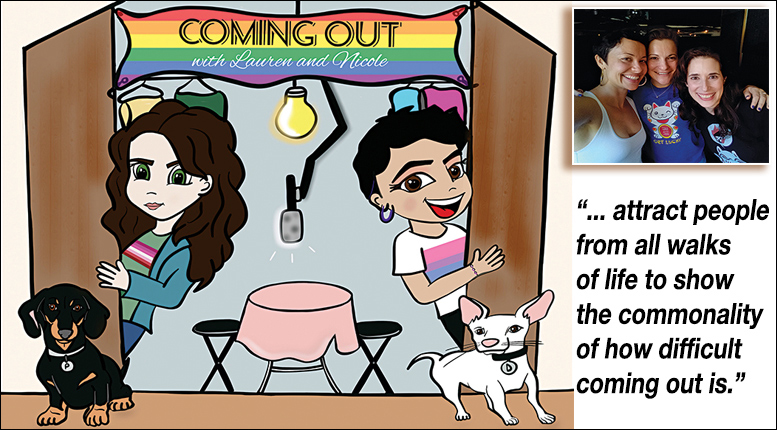 By: Mike Givens/TRT Assistant Editor—
“This is exactly what I never knew I needed,” said BluSparrow3.

Rating the podcast five stars, Neil Eggshellman, said “These episodes get to the heart of what it is like for queer friends to make their truth known. As a straight male, it helps me empathize with their challenges and realize where I can be a better friend/ally. It’s also going to keep you laughing throughout. Check it out!”

Via Instagram, an enthusiastic fan posted, “It is a wonderful resource for hearing the voices and stories of a variety of people in the LGBTQ+ community.”

Lauren Flans and Nicole Pacent first met while doing a stage reading of a new play three years ago. Both actresses, they decided to keep in touch. A friendship developed and Lauren pitched Nicole an idea.

“Nicole was just about to start facilitating groups at the Los Angeles LGBT Center…” said Flans. “I was so eager to get going that I actually asked her if she’d do a coming out podcast with me at the end of her very first day of facilitator training!

“She was like, ‘This is so crazy—I’ve literally been thinking about how I want to do something like that!’ So we started having meetings about it pretty much right away and launched this past June for Pride Month.”

The “Coming Out with Lauren and Nicole” podcast came out of a shared need for both women to discuss and amplify the stories of LGBTQ people. Both currently volunteer at the center and one workshop, in particular, helped drive Flans to make her podcast dream a reality.

“My hands-down favorite group to facilitate is the Women’s Coming Out Workshop; I’ve been doing it for over a year-and-a-half now,” she said. “The more time I spent with that group, the more two things in particular stood out to me: [first], it really made these women feel better about what they were going through when I was able to make them laugh, and [second] I was consistently wishing there was some kind of resource where they could hear a bunch of other coming out stories, so that they’d realize they absolutely weren’t alone in what they were feeling.

“There were so many times when one of the women in the group would relate something that was obviously incredibly personal and difficult for them, and when they had finished, the first thing I’d say was, ‘I just want you to know that’s probably the fourth time I’ve heard someone in this group say that.’”

Flans said the look of relief on the faces of the workshop attendees when their experiences were validated was “unreal” and that she wanted to find a resource for the women, a place where their identities as queer people could be affirmed. However, she said she never found any.

“F**k it! I’ll make it myself,” Flans said to herself. And she went about making a podcast.

“I wanted a co-host because I think that, for something as personal as coming out, it’s so important to have multiple perspectives,” she said. “I also knew from the start that I wanted to do it with Nicole if she was game.”

Pacent, as described by Flans, is an “outstanding LGBTQ advocate” and also identifies as bisexual and has done a lot of work around bi visibility. Flans identifies as a lesbian. The differences in experiences and orientations, according to Flans, brings a nuanced perspective to the show.

“One of the things that was really important to both me and Nicole was making sure that the podcast we made had a sense of humor about itself,” she said. “My background is very strongly based in comedy—improv and sketch—and I honestly believe that humor is essential in dealing with difficult subject matter.”

The show does, however, approach the subject of coming out with the deference and seriousness it deserves.

Daisy Egan, for example, an actor and writer living in New York, said she had a positive experience sharing her “coming out” story in episode five.

“It was the first time I was telling my story in a cohesive way, publicly,” she said. “So in a lot of ways I was working some things out for the first time. We ended up talking a lot about gender identity and polyamory. It felt like we were just having a conversation and I think the end result reflects that. Good interviewers don’t make you feel like you’re sitting in an interview.”

Egan also said that the podcast is important for a range of people living in the closet.

“I think normalizing experiences is important,” she said. “I think for younger listeners, podcasts like ‘Coming Out’ can help give strength and courage moving forward. Especially listeners in non-metropolitan areas where they may not run into too many LGBTQ+ folx. Having a wide breadth of experiences shared could help younger kids see that there’s not one right way, or they might recognize the experience helping them feel less alone.

“For us oldies, it’s easy to recognize pieces of our own story in everyone’s story. Hearing from our ‘fam’ is a great way to remind us that we’re in this mess together. So many of our stories are painful, but Lauren and Nicole make the conversation easy and fun. Looking back with humor is such a healing experience.”

In episode 12, Kieran Smiley, Flans’ close friend from childhood, was a guest on the show and shared a very touching story about his coming out experience.

In the episode, Smiley discusses how his first awareness of his orientation was during his teenage years when looking at adult magazines. He dated girls throughout high school, but during his sophomore year, he told Flans that he was attracted to a male classmate.

“It was euphoric to say it out loud,” he said. “And then for her to reciprocate it and tell me she had the same feelings for a girl was just like … it didn’t feel at all odd or off or something that wasn’t natural for the both of us.”

Describing it as a “freeing experience,” Smiley and Flans identified as bisexual, with Smiley saying that bisexuality was his “gateway” into his true acceptance of being gay later on in life.

All of the stories are gripping in their own way.

Pacent’s mother, Karen, is a guest on episode 17 and discusses her daughter’s coming out from the perspective of a parent.

Another guest, Lance Lowe, who’ll be featured in a future episode, according to Flans, came out to his mother two weeks before his episode was recorded.

“Sara Benincasa’s story about coming out to her dad [in episode 16] had a twist ending worthy of M. Night Shyamalan that was hilarious, and caught me and Nicole totally off-guard; you can hear in the episode how hard we’re laughing,” said Pacent.

Living in Cedar City, Utah, Rachel Hunt is a lead editor for an outdoor magazine and will be a guest on a future episode of the podcast and feels like the space it provides is vital.

“A podcast like this is absolutely needed in this day and age,” she said. “It’s important for people, members of the LGBTQ+ community and beyond, to hear these stories. Coming out is very personal, but I believe we gain strength from hearing each other’s stories. It has been especially poignant for me to hear stories about how life can get better after coming out. We need representation in this community, and we need to be seen and heard. This podcast is doing a great job of creating a space for both.”

“ … I am excited to share my story,” she continued. “A lot of my coming out centers around how I was raised within a specific religion and the internal struggle I dealt with in accepting myself as bisexual. I want to share my story in a way that people who may be in the same situation I was can see that you can accept yourself and live your life as your true self. I plan on sharing various snapshots of my life that had the biggest impact on accepting myself and also sharing a couple of stories of coming out to my friends.”

When asked about her vision for the podcast, Pacent said that the goal is to attract people from all walks of life to show the commonality of how difficult coming out is.

“You can live in the bluest state with the most liberal parents and already have out queer friends; it’s still an incredibly personal and vulnerable thing to reckon with within yourself, let alone share with others,” she said. “But a definite goal is for the podcast to expand its reach and audience so that the people who need it the very most can find it. People who live in places where they maybe can’t be out—even if they want to be—because it literally isn’t safe. We get messages from listeners in parts of the U.S. where that’s very true, and it’s both heart wrenching and inspiring.”

You can find “Coming Out with Lauren and Nicole” on all podcasting platforms.