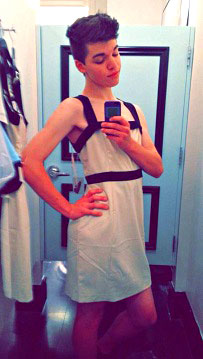 Leelah Alcorn, assigned a different name at birth, knew all too well what it meant to be ostracized by society, her parents, their Christian faith and even herself. After desperate attempts to be accepted by her family as the transgender girl she was, she took her life on Dec. 28. She was struck by a truck on Interstate 71, just 4 miles from her home in Montgomery County, Ohio.

The suicide note left by Leelah, scheduled and posted by her on social media, described her life of loneliness, of shame and despair and what ultimately led her to her fate. This kind of depression is only felt when someone is denied who they are repeatedly, regardless of desperate attempts to be acknowledged, supported and loved by her family, a fundamentalist Christian household that would not and still does not respect Leelah for who she was. [pullquote]My death needs to mean something. My death needs to be counted in the number of transgender people who commit suicide this year…Fix society. Please.”[/pullquote]

“Please don’t be sad, it’s for the better,” she wrote. The life I would’ve lived isn’t worth living … because I’m transgender. I could go into detail explaining why I feel that way, but this note is probably going to be lengthy enough as it is. To put it simply, I feel like a girl trapped in a boy’s body, and I’ve felt that way ever since I was 4. I never knew there was a word for that feeling, nor was it possible for a boy to become a girl, so I never told anyone and I just continued to do traditionally ‘boyish’ things to try to fit in.”

“We don’t support that, religiously,” Alcorn’s mother told CNN. “But we told him that we loved him unconditionally. We loved him no matter what. I loved my son. People need to know that I loved him. He was a good kid, a good boy.”

And, that is exactly the root of the problem. While I’m certain that her daughter’s tragic death is a horrific event that she will carry with her for the rest of her days, it could have been prevented by one simple gesture … being there for her, loving and supporting her when she needed it the most. Yet, throughout all interviews, Leelah was disregarded and referred to as her assigned name from birth, male pronouns and all. Although her mother spoke of unconditional love, the type of love expressed to her daughter was conditional and Leelah knew that.

“After 10 years of confusion, I finally understood who I was. I immediately told my mom, and she reacted extremely negatively, telling me that it was a phase, that I would never truly be a girl, that God doesn’t make mistakes, that I am wrong. If you are reading this, parents, please don’t tell this to your kids,” the note says. “Even if you are Christian or are against transgender people don’t ever say that to someone, especially your kid. That won’t do anything but make them hate [themselves]. That’s exactly what it did to me.”

The note described a long struggle to gain her parent’s acceptance as a transgender teen, but deep roots in Christian fundamentalism, prevented any type of understanding from the family.

“My mom started taking me to a therapist, but would only take me to christian therapists, (who were all very biased) so I never actually got the therapy I needed to cure me of my depression. I only got more christians telling me that I was selfish and wrong and that I should look to God for help.”

Realizing that she would have to wait until she was 18 to receive any medical treatment to transition into the woman she was, she finally succumbed to hopelessness.

“I was just going to look like a man in drag for the rest of my life,” she wrote.

It all began to feel like “too much weight” to the 17-year-old, she wrote. With few friends, saving money to move out of her parent’s home, keeping her grades up and facing the church congregation who she felt had only judgment for her, there was nowhere else for her to turn, as she described it in her final letter.

“The only way I will rest in peace is if one day transgender people aren’t treated the way I was, they’re treated like humans, with valid feelings and human rights,” the note continues. Gender needs to be taught about in schools, the earlier the better. My death needs to mean something. My death needs to be counted in the number of transgender people who commit suicide this year…Fix society. Please.”

Over the past several weeks, I’ve been tuned into a series offered exclusively on Amazon called “Transparent.” [Transparent was first reviewed in March, 2014 by our TRT Ask a Trans Woman Columnist Lorelei Erisis] This series, undoubtedly, is breaking down the barriers that exist between transgender people and society in general. This raw footage exploits the plights of the transgender community in a way that stimulates intellectual thought about the struggles of transgender lives.

“Transparent” doesn’t just aim to tell the story of a trans character, but of an entire family questioning their understandings of gender, sexuality and identity, and learning to accept and love one another as they each evolve into who they are. Even if you are an ally of the trans community and think you understand it all, you don’t. There is always something to learn. There is always a Leelah to support. [pullquote]Over the past several weeks, I’ve been tuned into a series offered exclusively on Amazon called “Transparent.” …This raw footage exploits the plights of the transgender community in a way that stimulates intellectual thought about the struggles of transgender lives.[/pullquote]

If you are contemplating suicide, please remember that there are people who understand, care for and love you just the way you are. There is community, there is support. If you’re thinking about suicide, you deserve immediate help. Please call the Trevor Lifeline at 866-488-7386 or visit www.thetrevorproject.org. On page 6 of this issue, there is a transgender resource list for transgender individuals, parents, professionals, friends and allies seeking support or services.

*Nicole Lashomb is the editor-in-chief of The Rainbow Times. She holds an MBA from Marylhurst University and a Bachelors from SUNY Potsdam. She can be reached at editor@therainbowtimesmass.com.

1 Comment on "Remembering Leelah Alcorn: You Will Always Sparkle"