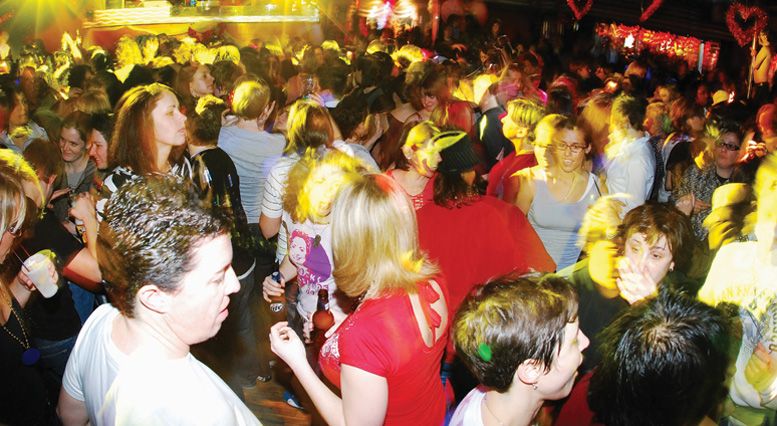 For the last decade, Kristen Porter has produced and managed Kristen Porter Presents Second Saturdays at Machine Nightclub in Boston and her reputation, above all, is evidenced by the people who have attended the monthly event and have come to know her..

Jullieanne Doherty has attended the event since its genesis and attests to the importance of Porter’s work and the bitter sweetness of the closing of Second Saturdays on November 11.

“I think Second Saturdays, and pretty much in general what Kristen Porter does, is a connector, a bridge of diversity with different cultural backgrounds, races, gender expressions, and even religions,” she said. “Specifically one thing I love about it is that it’s pretty intergenerational.”

Second Saturdays’ themed events often featured two sides of nightlife culture—on one end, Machine Nightclub’s atmosphere with the beat of pumping dance music, and on the other, an intimate place for people to sit, talk, and unwind.

“There were more chill areas for conversations, then obviously going inside it allows for a sense of community, and whatever you need it to be that month,” Doherty continued. “If you needed to go wild with your friends and have a party night, if you wanted to literally break away from home and break away from your work week, you could do that. I’ve equally taken part in drinking and had sober nights, and that was a really great part of Second Saturdays.”

Thaís Valadares, a tattoo artist who will be judging the “INK” tattoo competition at the final Second Saturday event, said as one of the larger gatherings for LGBTQ people in Boston outside of the annual Pride celebration, Second Saturdays was an important destination to come together.

“I think it’s a really an important place to have, someplace to gather and meet other people from your community, especially for those that didn’t have the opportunity growing up. It puts you in perspective, and makes you realize you’re not the only person going through what you’re going through,” Valadares said. “Seeing all these happy people is the best part about it, because you know you’re going to have a good time.”

Valadares, who met her current girlfriend two years ago at a Second Saturday event, said they are still enjoying the reverberations of that fateful night.

“When I met my girlfriend, that was her first time there, and she wasn’t out to her family or anything,” Valadares said. “That definitely started something in her to grow, because I think there are a lot of different levels of being out and being gay. It was a growing step for her.”

Doherty also walked away from one Second Saturday Pride after party event with a gift.

“I fell in love with my wife at Machine, we went out for a date night, and I just remember that I wanted to have her dancing by my side,” Doherty said. “I literally fell for my wife. I twisted my ankle badly, and we were covered in glitter and Pride, and she helped me off the dance floor and took care of me, and we were laughing and smiling and full of love.”

The event’s longtime photographer, Christine Hurley, said Second Saturdays has given her an opportunity to grow in her field.

“At Second Saturdays at Machine Nightclub, I am able to push my creativity and take advantage of the lighting and crowd to take interesting photos. I have learned so much just by doing and experimenting,” she said.

In fact, beyond the creative gains Hurley has made working for the event, it has also helped to push ahead the reach of her business.

“While working with Kristen Porter and Dyke Night, I’ve been able to foster relationships with people that lead to referrals to photograph other events,” Hurley said. “I will still be photographing at Kristen’s future events and at other Boston nightclubs.”

For many people in the LGBTQ community, having a safe space to meet other people is invaluable for their social life.

Second Saturdays for many has been a way to connect with more people in the community and foster long-term relationships.

“My physical group of friends has changed. Not only have we met our loves or married our loves, but now have dogs, babies, and baby carriers,” Doherty said. “Definitely seeing how we’ve transformed over the years, but it’s also cool to know in my social circle, I’ve developed long-lasting, lifelong friendships.”

Second Saturdays has evidently been the spark for many memories that will live on in the hearts of those who went. Doherty fondly remembered one Pride celebration after party while at a Second Saturday event. Amid the buzz and energy of Machine Nightclub, she had a quiet moment to peer out the window.

“You look out and see this sea of rainbows, glitter, and happiness,” Doherty said. “You can really lose yourself and find yourself in that space, in that time.”

After everything she has seen over the past 10 years, Porter herself said one recurring experience endures in her mind.

“I have had the wonderful opportunity to officiate the weddings (as a Massachusetts Justice of the Peace) of several couples who have met at one of my events over the years,” Porter said. “Knowing that the space I created was a vehicle to bring people together is fabulous, but to be asked to participate so meaningfully in such an important day [and] ceremony is a profound honor.”

The end of Second Saturdays, for Porter, is an opportunity to look ahead, and look back at those who have helped her, those who have been a part of her events, and the memories that will live on.

“These [ten] years mark a beautiful relationship between me, Machine and you—800 women and friends on one dance floor [for] a magickal [sic] moment in time and a night that history will always remember,” Porter said in a press release on her website. “A night where some of you will remember coming ‘out’ for the first time, meeting your girlfriend, or maybe even your spouse, and so many memories.”

Porter is hard at work continuing her legacy as a major player in the LGBTQ community. Her company, which donates profits to various charities and programs aimed at benefiting LGBTQ people, has several projects in the works.

It is evident that people will be following her wherever she goes. For Doherty, the lasting connection runs deep.

“Kristen Porter has become a mentor to me.”

For more information on Kristen Porter Presents, including its philanthropic work and future events, visit their website at www.dykenight.com.

[This story was originally published in the November 2, 2017 issue of TRT].