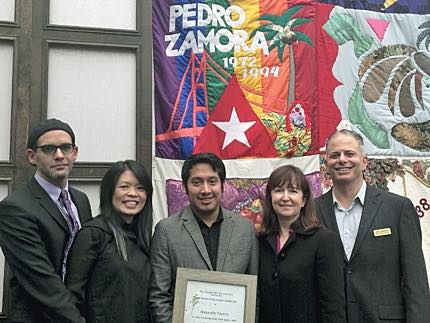 The Pedro Zamora Young Leaders Scholarship Program, a program of the National AIDS Memorial Grove, recognizes, supports and encourages the educational efforts of young people committed to active roles of public service and leadership in the fight against HIV/AIDS.

Named in honor of AIDS educator, activist and reality television pioneer Pedro Zamora, who passed away more than twenty years ago from an AIDS-related illness, the scholarship program began in 2009 and has helped support the education of young people who today are engaged in a wide variety of HIV-related work both in school as well as within the chosen academic field.  The scholarship program is funded primarily through a grant provided by UnitedHealthcare. [pullquote]Scholarship applications are being accepted through June 15, 2015 and can be downloaded from the National AIDS Memorial Grove website at www.aidsmemorial.org. Scholarships will be awarded in August and range from $2,500 to $5,000.[/pullquote]

“This scholarship program is about the future, the young leaders from this generation, whose efforts mirror Pedro’s passionate commitment to ending the HIV/AIDS pandemic,” said John Cunningham, Executive Director of the National AIDS Memorial Grove. “We’re excited to support the next generation of HIV/AIDS leaders and innovators.”

Scholarship applications are being accepted through June 15, 2015 and can be downloaded from the National AIDS Memorial Grove website at www.aidsmemorial.org. Scholarships will be awarded in August and range from $2,500 to $5,000.

The Pedro Zamora Young Leaders Scholarship is open to all current high school seniors, and college freshman, sophomores and juniors (ages 27 and younger) who demonstrate an active commitment to fighting HIV/AIDS and taking on roles of public service and leadership.

All applicants must describe their current leadership efforts/experience, its significance to the HIV/AIDS epidemic, as well as how their future career plans or public service will be an extension of their current efforts. Applicants must provide at least one letter of recommendation from a teacher, program coordinator, supervisor/ally/community leader who is directly involved in their HIV/AIDS-related service, leadership, or field of study. A panel of community leaders will judge the applications.

Further information and applications are available at www.aidsmemorial.org, or by contacting Matt Kennedy at (415) 765-0446 or mkennedy@aidsmemorial.org.  Details about helping fund and support the Pedro Zamora Young Leaders Scholarship Program can also be found on the website.

About the National AIDS Memorial Grove:
The National AIDS Memorial Grove is a dedicated space in the national landscape where millions of Americans touched directly or indirectly by AIDS can gather to heal, hope, and remember. The Grove was created twenty-four years ago at the height of the HIV/AIDS epidemic as a place where those impacted by AIDS could both grieve and begin the process of healing. In 1996, The Grove was elevated as a National Memorial through legislation sponsored by Congresswoman Nancy Pelosi and signed into law by President Bill Clinton. Today, more than 23,000 individuals from around the world have contributed over 150,000 volunteer hours to support the National AIDS Memorial Grove and its mission to provide, in perpetuity, a place of remembrance so that the lives of people who died from AIDS are not forgotten and the story is known by future generations.  For more information visit www.aidsmemorial.org, follow on Facebook, @AIDS_Memorial on Twitter or call 415-765-0498.