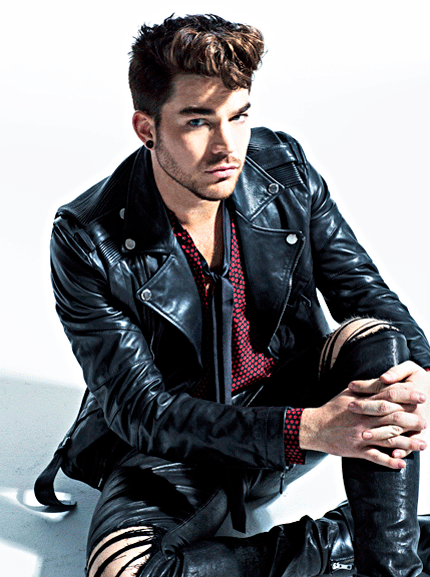 The singer opens up about his ‘outlandish’ past, the lack of LGBT pop stars and his dating problems

Stripped of that glossy sheen, those painted nails and the purple mane that he famously flaunted on his 2009 post-American Idol debut, For Your Entertainment, Adam Lambert’s latest album cover isn’t even in color. His hair still reaches the same towering heights as his voice on The Original High, but otherwise, he’s unadorned.

The glam is gone.

In our recent interview, the Idol alum comes clean about how a long period of “overcompensation”—yes, the outfits—led him to the latest chapter in his life.

People are calling The Original High a reinvention. Is that how you see it?

It’s not the most far off thing. I consider it more like a “reframing.” I feel like it’s still me at the heart of it. It’s still my voice, but a little more grown up, and I feel like the sonic frame around the vocals is something new.

Chris Azzopardi: Why tweak your sound?

Q. Do your famously passionate fans add pressure to the creative process?

Because my fans are so loyal and loving, and they’re so passionate about all the things that I do, I think that they recognize that if it’s something I believe in that’s exciting, they get excited by that. I always think about the fans, but with this album, more than ever, I’ve gone inward and wanted to make music that I have some integrity with, that meant something to me.

Q. Why at this point in your career?

It’s time. It was time to make a shift, to do something a little different. I went through a lot of changes last year. I ended up leaving my first label (RCA Records), and I had to change management at the end of my last album; it was just time for something fresh. I just got off the tour with Queen, which was amazing for me and felt really good, and it gave me a lot of confidence and it made me not so scared about everything. It gave me a sense of career security in a way that I haven’t felt before.

Q. What were you scared of? You’ve clearly never had trouble being yourself.

Over the last five years, right after Idol, I think there was a certain amount of overcompensation in certain ways. I was dressing really outlandishly, and it was a lot of fun and it’s definitely a part of who I am to wanna play dress up, but I think it got to a point where I was hiding behind it a bit. Behind all of that, all of everything. It was like a preemptive defense mechanism. It’s like the kid who goes to high school dressed goth and he’s actually not into the devil at all but doesn’t wanna be bothered by anybody. (Laughs) I don’t think I realized it at the time, but I can see this in hindsight now. At the time I thought, “This is who I am; this is what I do,” and now it just feels like I’m in a new place in my life. I’ve grown up and evolved and I’m in a new place, and the album—the subject matter and the sound—reflect that.

Q. When it comes to LGBT artists, you really helped pave the way. These days, how welcoming do you think the music industry is to queer artists?

I think things are definitely going in the right direction. I just wanna see more! The great thing about having more and more artists who identify as queer is it normalizes it so the media can’t sensationalize it as an idea. In the past, I felt the media painted me as someone who’s super hypersexual and someone who only wants to talk about his orientation. While I’m very comfortable doing that, I have a lot more to talk about in reality. So, it’s been interesting. But the more of us that are out there that provide some diversity, who can show different types of gay artists, it’ll make it so it’s not as much of a big deal. It’ll be an afterthought. We’ll get to move toward a post-gay presence.

Q. Hearing your collaboration with Tove Lo on “Rumors” on this album got me thinking: What do you think of doing a love song with another gay male artist, like Sam Smith or Jake Shears?

It’s certainly possible, yeah. With “Rumors,” it’s funny; you can listen to that and go, “Oh, it’s like a romantic duet,” but before we wrote it we were talking about being an artist in the industry and having to maintain a personal life, and how it’s a little tricky and how it’s not always easy to balance the two. So, that’s what we were singing about; it doesn’t necessarily mean we’re singing to each other – it just means we’re singing about this thing together. But yeah, a duet with a guy—who knows, it could happen!

Q. It should happen.

You have to carry the flag! (Laughs)

Q. Right?! Isn’t that what we’ve been saying since the beginning of your career?

It’s definitely been interesting. Really interesting. When I see that there can be a ripple effect of positivity and change and helping people just because I identify as one thing or another, and I’m OK to talk about it, that’s amazing. It’s amazing that it takes that little to make that much of an impact.

Q. American Idol wraps next year. In your opinion, what happened to the show? Why haven’t we seen another Kelly or Carrie or Adam in recent years?

I’m not totally sure about that, but I do know that when the show first started it was a time in America when we needed something like that. I mean, 9/11 had just happened, so our country was looking for something to believe in. Not that American Idol healed us over 9/11 by itself, but it definitely reflected what we wanted from our entertainment at the time. It gave people hope that, hey, you can be from anywhere and you can have this dream and it can come true, and it was really positive in that regard.

It also came at a time when the music industry was really suffering. I mean, we had all the pirating that was going on; all of a sudden the Internet had taken the rug out from underneath the record companies, and they were looking for an answer. All of a sudden we’re giving so much power to the people. That was really impressive, because up until that point the labels really held the strings and decided what the public was going to consume.

Q. Mariah Carey recently called American Idol “fake” and had some pointed words for the show. As a former contestant on the show, how did you feel about what she said? Did American Idol ever feel “fake” to you?

It’s a TV show. I didn’t feel like it was fake at all. I knew what the concept was. Personally, if you’re blindsided by what American Idol is, then you weren’t paying attention. It’s not that difficult to know what you’re getting yourself into. That’s why I auditioned; I knew what I was getting myself into.

Q. You were crafty about it.

I’m crafty, yeah! I try to be crafty. (Laughs) And I think for the judges it’s a different game than it is for the contestants, obviously, and things shifted a bit when the show wanted to focus on the judges more than the contestants.

Q. When we chatted in 2012, you told me a Glambert sent you a urethra rod. What’s the craziest thing you’ve ever done for an artist you were a fan of?

I’ve never done anything like that! That was so weird when that happened. I didn’t even know what that was. Like, “what the hell is this thing?” Then I looked it up and went “whaaaaat?” I remember saying, “That’s a thing? People do that?!”

I have to say, I’ve never been a super fanatical fan of anybody. I’ve definitely been a fan. I mean, my fans have called me out before, being like, “Oh, you’re fan-boying about so-and-so,” and it’s just because I said on Twitter, “Oh, you sound great on this song,” so I guess that’s being a fan!

Q. How often do Glamberts stop you on the street?

It happens occasionally. Maybe not so much on the street… (laughs) I know that’s just an expression.

Q. Yes, literally in the street, in front of a car.

Q. I sourced a few questions out to your biggest fans, so from here on, these are straight from the Glamberts. First, what is the greatest “Original High” you’ve ever experienced?

Standing on stage for the first time and singing. That adrenaline rush you get from that exchange with the audience is like nothing else. It bit me and then that was it. I was toast.

Q. What do you think about when you go to sleep?

My brain is crazy. I think a lot, so I think about everything I have to do the next day. Sometimes it’s hard for me to fall asleep because of that.

Q. If you could do something all over again, what would it be?

I don’t really have a lot of regrets, to be honest with you. I guess there have been plenty of times where I’ll meet somebody at a bar, or a friend will introduce me to somebody at a party or at dinner, and I don’t have good game. I don’t think to be outgoing or say the right thing, and then after the fact I’ll be like, “Why didn’t I just talk to that person? Why didn’t I just tell them I thought they were cute?!” I gotta say, sometimes I really don’t have very good game.

Q. One fan wanted to know if you ever feel uncomfortable watching what’s said about you by the Glamberts on Twitter.

I don’t think “uncomfortable” is the right word, but I’m not always the best at taking a compliment. I’m pretty hard on myself and sarcastic about things, so it’s always flattering, but it makes me feel like, “Ehh, let’s talk about something else.”

Q. What’s the first thing that attracts you to a man you’re interested in?

Charm. I think charm is an amazing thing because it can make them more attractive than they are – or, without it, it can make them less attractive. I think that’s something that’s developed as I’ve gotten older. Obviously, I have my set of physical things that I like, but if somebody’s a dud and they have no personality then it all goes out the window. Charm and personality are key.

(Laughs) I think I’ve had to answer every f#$%ing thing you can think of!