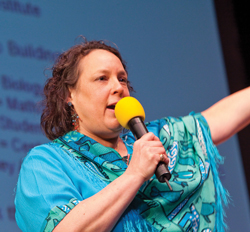 Robin McHealen is the founder and Executive Director of True Colors, a Connecticut non-profit organization, which works with other social service agencies, schools, organizations, and within communities to meet the needs of sexual and gender minority youth. According to McHealen, this year the True Colors XVIII Conference brought together over 3,200 youth, a record attendance. It was also historical in that it had “opening remarks by Governor Malloy, State Comptroller Kevin Lembo (the first opening gay man elected to statewide public office in CT), Child Advocate Jeanne Milstein and CT State Senator Beth Bye” said McHealen.

True Colors trains organizes the largest LGBT youth conference in the country and manages the state’s only LGBT mentoring program. The Rainbow Times spoke with McHealen recently about her work on behalf of queer youth.

TRT: Which people in the LGBT or allied community have been most influential in your life?

RM: One was a professor at the UCONN School of Social Work – his name was Manuel Magaz. He was a human rights and HIV/AIDS activist. He was an out Latino gay man and he was the first person I ever saw come out publicly in a professional environment and it was very powerful and moving for me and really helped inspire my own journey.

Another was John Bonelli – he was my first field work instructor and was the first out (gay) man to run for public office in Connecticut.

TRT: How can the average member of the LGBT community make a difference?
RM: Number one, if you’re an adult and have the resources, you need to be out. The single most effective form of prejudice reduction is face-to-face interactions over a period of time. The number two thing they can do is get active in a social issue that impacts them. It doesn’t have to be an LGBT issue. Being active in our own civil rights movement, by talking with their legislators and friends and family about issues that impact us.

TRT: What is the best advice you have ever been given to do the proactive things you do today for our community?
RM: As activists and advocates, we’ve got to take care of ourselves and our physical well-being-to be passionate. Follow your heart. Values are what lead the way. Using my values as a means of deciding what I am going to do and how I am going to act is probably the best advice I ever got.

TRT: What have you done for the LGBT community individually or collectively that you are proudest of?
RM: The True Colors Conference, which is now the largest LGBT youth conference in the country, started as a field work project when I was getting my Master’s (degree) at UCONN. We’re now in our 18th year and we’ve literally impacted thousands of kids’ lives. We created Connecticut’s first and only mentoring program for queer youth. A lot of our kids are doing a lot better than they would have if we hadn’t been here. It’s never been just me ever. It’s always been me working with dedicated and passionate people who shared my vision for a world where people of all orientations and genders are valued.

TRT: What motivates your work within this community?
RM: I had a really terrible adolescence. I felt so alienated and so isolated and so alone. I was suicidal through most of my adolescence. Being gay at that time felt like the worst thing in the world to me and I didn’t want other kids to go through that.

TRT: What can be done about teen suicides that happen as a result of bullying or anti-gay attitudes?
RM: There’s a really strong connection between bad home environments and bad school environments and kids getting depressed (and hurting themselves). The two places where they spend the most time – school and home – are the places where they are the least safe. We need to actively continue to work in the school system and with families to make a difference for kids because being harassed over a long period of time leads to the level of despair that can push a kid into suicide or self-harm.

TRT: Do you consider yourself a hero for the LGBT community?

RM: No. The heroes are the kids who are coming out at 11 and 12 and 13 and negotiating a world that’s often hostile and sometimes supportive and they inspire me every day. There are trans kids coming out at 6 or 7 years old. I think those kids are the heroes.