BOSTON, Mass.—On Wednesday, February 22, the Trump administration announced plans to rescind Obama-era guidelines that barred discrimination against transgender students. The federal guidelines were based on policy pioneered in Massachusetts. The guidance asserts that denying transgender students equal access to school programs and activities in accordance with their gender identity is a violation of Title IX, the federal law that prohibits sex discrimination in public schools.

“This is a civil rights issue and it should not be left up to states to decide whether or not to discriminate against transgender youth anywhere in our communities, including our schools,” said Senate President Stan Rosenberg (D-Amherst). “Schools should be a safe environment where students can learn, grow and feel accepted in the classroom. Removing federal protection endangers transgender students across the country and completely undermines the value of their education.”

Senator Julian Cyr (D-Truro) expressed outrage at the direction in which the Trump administration is moving.

“These protections have made a real difference for transgender and gender non-conforming students in schools across our country. For transgender youth, this is a matter of life and death. I am alarmed and saddened by the Trump administration’s disregard for the safety and well-being of all children.”

The federal guidelines put in place by President Obama were modeled after state guidance first adopted in Massachusetts. The Massachusetts guidance, which remains in effect, was issued by the Department of Elementary and Secondary Education in consultation with the Massachusetts Commission on LGBTQ Youth, GLAD, and the Massachusetts Transgender Political Coalition.

Mason Dunn, executive director of the MTPC described the success that these guidelines have had in Massachusetts.

“Here in Massachusetts we have seen, first hand, the successful implementation of trans-inclusive policies in our public schools. The 2013 DESE guidance, and its implementation, made it clear that open and affirming policies for transgender students is simply good educational practice.” 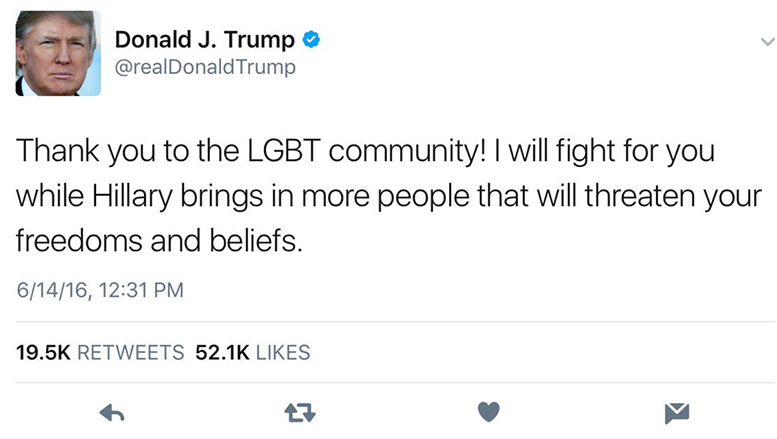 Falsehood of Donald Trump, back during Pride Month in 2016.

Kasey Suffredini, co-chair of Freedom Massachusetts, the successful bipartisan campaign to update Massachusetts’ nondiscrimination law in 2016 to include protections for transgender people from discrimination in public places, stated that the Commonwealth’s guidelines are now more important than ever.

“The administration’s announcement has no impact on the Commonwealth’s law protecting students from discrimination in schools, under which schools have been successfully balancing the needs of all students for years, ensuring that transgender students – who already face exponentially higher levels of bullying and harassment than their peers – can participate fully and succeed in school just like their non-transgender peers. As always, Massachusetts is and remains a beacon of liberty and fairness, a point of local pride that matters more now than ever.”

Senator Cyr asserted that what remains most important is assuring transgender youth that their rights and education will remain respected and protected in Massachusetts.

“Despite protections from discrimination at the state level, the actions by this Administration send a cruel and harmful message to transgender students in Massachusetts. Now more than ever, it is important for state leaders to let transgender students know we value their education and well-being.”

“The withdrawal of this guidance is a devastating step back for transgender students, who today are receiving the message that the federal government will not vigorously defend their right to an education.This unfortunate reversal of protections reflects crass, unprincipled political pandering. The American people support fairness and equal treatment of all students and do not think vulnerable young people should be made pawns of a political drama being played out by the current administration.

“The sudden reversal by the Education and the Justice departments does nothing to change the fact that the law protects transgender students’ right to an equal education. But it does mean that state and local efforts must be redoubled to ensure full and equal inclusion of transgender students in school.

“This guidance has provided practical and important advice to schools about how to foster positive learning environments for transgender students which has been especially critical in local communities where schools and districts have not been able to develop such policies on their own.

Levi added that GLAD would like to hear from any transgender student experiencing discriminatory treatment, via GLAD Answers. Students can contact GLAD Answers by phone (800-455-GLAD), email (gladanswers@glad.org,) or chat (www.gladanswers.org).

The Leadership Conference on Civil and Human Rights, the National Center for Transgender Equality, GLSEN, the National Women’s Law Center, the NAACP Legal Defense and Educational Fund, Inc., the American Civil Liberties Union, the Human Rights Campaign, and MALDEF issued the following statement in response to the news:

“The U.S. Department of Education has a critical and well-established role in clarifying and enforcing civil rights protections for all students. The department has an obligation to ensure that all students have equal educational opportunities, a mandate that applies regardless of a student’s gender identity. Transgender students who face discrimination in schools have worse educational outcomes, and poorer psychological well-being than their cisgender peers.

The guidance released by the Departments of Justice and Education last May clarified for school districts across the country that transgender students are protected under Title IX, an existing federal civil rights law that protects students from discrimination based on sex. The guidance presented best practices from schools across the country and advised schools on complying with the law. School districts received much-needed clarification that, under federal law, they must treat students equally and with dignity, consistent with their gender identity. Additionally, hundreds of thousands of transgender students received a clear message: the law was on their side.

By rescinding the guidance today, the Trump administration has taken the opposite stance. They have sent a deeply troubling message to students that the administration will not stand up for students’ civil rights. We condemn the administration’s decision, vow to fight to enforce Title IX, which continues to protect transgender students, and call on individual schools and districts to treat students consistent with their gender identity and consistent with the rescinded guidance that accurately explained the law.”

“Supports for transgender students in K-12 schools change and save lives, and hurt no one. President Trump’s reversal of federal guidance affirming Title IX protections in schools undermines the settled expectations and protections afforded by federal law, hurts transgender students and impedes the progress we have made creating safer and more inclusive learning environments for all.

“While the Trump administration may abandon transgender students, GLSEN won’t. And neither will the thousands of teachers, administrators and parents around the country who work with GLSEN and our local Chapters to ensure that transgender students everywhere have the opportunity to simply be themselves and live better lives. Schools, leaders and teachers must do the right thing and give all students the chance in life they deserve.

“The administration’s actions today do not and cannot change the well-established legal foundations upon which the federal Title IX guidance is based. Many federal courts have already determined that Title IX’s prohibition on sex discrimination and the Constitution’s guarantee of equal protection extend to transgender individuals. Fairly applied, the law remains on our side.”

Today’s announcement undermines decades of effort by teachers, school administrators, students and parents to increase access to public education for all.

The Executive Director of the National Center for Lesbian Rights, Kate Kendell, Esq., issued a statement as well:

“There is no legal basis for this shift in federal policy, which is driven by the anti-LGBT agenda of Vice President Pence and Attorney General Sessions. Since our founding, the National Center for Lesbian Rights has stood for the principle that every child deserves love, respect, and recognition for who they are. We have advanced this vision for 40 years, and we do not intend to let this administration’s irresponsible and cowardly actions get in the way of fighting for our youth. The laws of many states and the District of Columbia already reflect our shared commitment to making schools safer for LGBTQ youth, and numerous federal courts have agreed that Title IX protects these students as well. We will not let Jeff Sessions and Mike Pence, two of the most openly anti-LGBT public officials in our nation’s history, erase the gains we have made.”

[From a Compilation of News Releases]