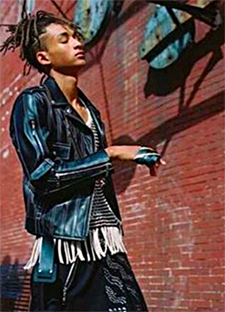 Will and Jada Pinkett Smith’s 17-year-old son has made many headlines lately and they are not just about his acting career. The teenager, whose style has taken the mainstream media by surprise, has already starred in the new women’s campaign for Louis Vuitton’s Spring/Summer 2016 collection, and he wears ladies’ clothes from the line in the ads.

Smith was recently asked how he handles insults and jokes made about his son, Jaden, and his gender-fluid style.

“There’s a really powerful internal quality as an artist that as parents we encourage,” Smith said to the Gay Star News. The actor said his son is “fearless” and he encourages him as an artist but admits as a parent he does sometime worry about the discrimination his son could face. “Jaden is 100% fearless. He will do anything, you know? So as a parent, it’s scary. It’s really terrifying. But he is completely willing to live and die by his own artistic decisions and he just doesn’t concern himself with what people think,” Smith said.

Jokingly, when asked about that freedom of expression his kids have, Smith added, “I think it may had been a mistake. We may have gone too far.”

Don’t miss the rest of this interview right here.

In the Wake of 2016 U.S. Presidential Election, Vigilance Needed More Than Ever