Once the memo was leaked from the White House that would essentially erase transgender identity from being recognized by the government, Ryley Copans sprung into action. Massachusetts native and Founder/Director and Project Producer of Stand Up, Speak Out set out to amplify transgender voices through the #WontBeErased Photo Series, creating visibility and pride in trans identity. The Rainbow Times caught up with Copans to learn more about his project.

TRT: What is the #WontBeErased Photo Series project? When did it start and why? 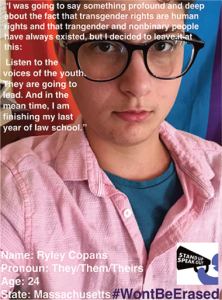 RC: The #WontBeErased Photo Series project features transgender and gender nonconforming people across intersectional identities from across the United States, highlighting a true reflection of our community. With quotes about anything from a direct response to the memo and other actions, to quotes about transgender human rights, to “I am” statements that holistically highlight their identity and amplify the fact that transgender people are people, these folx are speaking out and letting their country and its government know that they #WontBeErased!

I had the idea to launch this project the day that memo was leaked. With a week and a half before the midterm elections, and still doing nonstop work surrounding Question 3 and my #YESon3MA, Trans Youth Share What Question Three Really Means ad, I still instantly knew I needed to do something. What’s another project? We are fighting for existence. I had been saying all along that Question 3 is historically significant. … It sets a precedent for the rest of the country, as we are historically a leader state, and this is true now more than ever. After this memo, and especially as more announcements came out from other offices in the administration, I knew that my community across the county needed to know they are heard, seen, and valued.

I started reaching out to my #YESon3MA production team about their thoughts and sending proposals to local transgender people and parents of transgender children. I also am friends on Facebook with a number of trans people and parents of trans kids in other states—there is an online community that has come together among transgender human rights activists—and I reached out to these folks as well. Some of these friends even reached out their local friends about joining the photo series!

After getting some photos together, I created the album on Facebook and launched the #WontBeErased Photo Series as an ongoing project on October Saturday, October 27th and we quickly began receiving messages from folks who wanted join the photo series!

Q: Is it important it is to let the current administration know about #WontBeErased and why?

A: Most definitely! The #WontBeErased Photo Series exists as transgender and gender nonconforming people telling this human rights violating administration that we exist, our gender identity is real, we are people, and we deserve basic human rights. The administration cannot redefine gender to limit to binary sexes—which also excludes intersex people—and excludes transgender and gender nonconforming people. We exist, we have always existed. The Department of Health cannot remove gender identity from their website and exclude us from medical care, which is not just about gender affirming care, but basic everyday medical care to treatment of chronic illnesses. The Department of Education cannot allow and even try to allow policies that require schools to discriminate. The Department of Justice cannot allow other places of public accommodation and places of employment to discriminate.

The #WontBeErased Photo Series puts human faces to exactly who is being harmed by these human rights violating policies and proposals. Many of the quotes also further show other aspects of people’s identities. One participant, Seamus, says “I am a dancer and I rescue frogs. I’m not as scary as you pretend I am.” Honestly, I think this nine-year-old sums that up perfectly! Further, the photo series shows that people will not stand for these attacks on their existence, and many of these people are of voting age (or have loving parents who are voting for their rights)!

Q: You’ve had other projects prior to this one, like #YesOn3MA and “Stand Up, Speak Out”, which of them is a non-profit 501(c)3 organization, the other two or the #WontBeErased one?

A: The #YESon3MA Trans Youth Share What Question Three Really Means ad and the #WontBeErased Photo Series are both projects under Stand Up, Speak Out.

I founded Stand Up, Speak Out in 2010 when I was 16, originally as an anti-bullying organization, and now more described as an intersectional activism and advocacy platform with mostly an online presence. Since I have been in school since then, undergrad, and now law school, we actually still are not a 501(c)3 [organization]. There are a number of requirements your organization needs to meet in order to become a 501(c)3, such as certain positions with the organization, etc., which I still do not have the capacity for. Currently, I am seeking out pro bono legal assistance for trademarking and/or incorporating Stand Up, Speak Out’s name and logo, most likely both because verifying our social media accounts requires some form of a ‘business record’ or articles of incorporation. Unfortunately, even this is incredibly expensive—if we can find a lawyer who will assist us with this pro bono, the paperwork itself and filing it costs a decent sum of money.

Q: Are you targeting a specific LGBTQ (or just trans and allies) demographic with it? If yes, explain. I ask because I haven’t come across any elderly people in them.

A: Unlike #YESon3MA, we are seeking transgender and gender nonconforming people of all ages for the #WontBeErased Photo Series. With Stand Up, Speak Out mainly having an online presence, and this project so far displayed on our Facebook page Stand Up, Speak Out, as well as occasional Twitter posts under @SUSORyley and my personal Instagram @thegaythey—and hopefully soon our official website standspeak.org—we have mostly gotten responses from youth and parents of transgender children.

There are some adults in the photo series, but as you said, they are not quite our trans elders. I would love to find more ways to reach out to this age demographic and have them join the photo series. Intersectionality also refers to age, and an important part of the mission of the project is to show transgender and gender nonconforming people across intersectional identities.

Q: Why should this be important to trans people, allies, their friends, and family?

A: This photo series is raising awareness about the severity and human rights violating nature of the actions and rhetoric of the federal administration through the perspectives of those directly impacted, and highlighting the fact that transgender people are people and trans rights are human rights. For cisgender allies, it is important to stay up to date with what the administration is saying and trying to do, and to resist and advocate for the sake of your fellow human beings.

Many of the folks who have joined the #WontBeErased Photo Series have said that it has been empowering. They are given a space to have their voices heard and every aspect of their identities valued. We have a number of youth in the photo series and their parents have also told me this project is incredibly hopeful. Transgender and gender nonconforming people are exhausted and drained from our endless fight to simply exist, and parents of transgender youth are feeling it too, as they also tirelessly fight for their children and their children’s community. Friends and family, and strangers alike are seeing that these young people are truly the future. The adults in the photo series are providing similar hope, giving youth people to look up to who understand, and who also have not only survived, but thrived. Allies need to look at these photos and share them as a way of supporting the transgender community and showing other people that transgender people are people and transgender rights are human rights.

Q: Is there anywhere else that people can go to, to find the #WontBeErased Photo Series Project online?