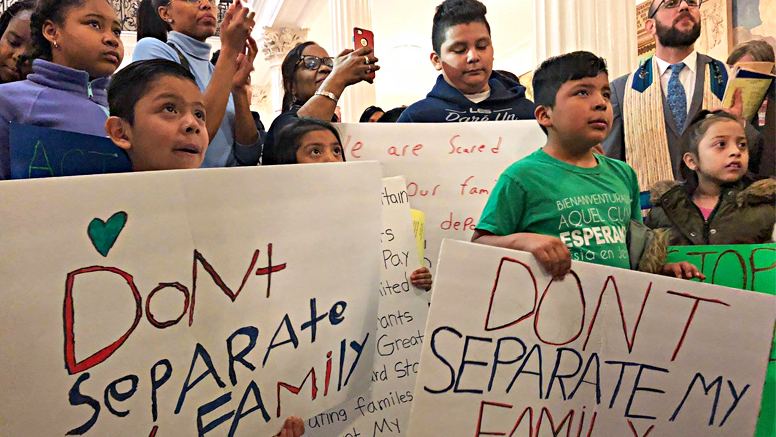 Boston Vigil and Rally to be held July 24 to demand action to protect immigrants. Photo: Facebook/ECCO

A vigil and rally to protect immigrants

BOSTON—Recently, Mass. legislators released the FY2019 Budget Bill which failed to include four basic protections for immigrant families that had been included in the initial MA Senate version, according to various immigrant organizations’ officials. As a result of the alleged inaction taken by the commonwealth to protect immigrants, including children and families, such organizations have organized an action to call attention to the blatant exclusion.

On Tuesday, July 24, clergy, community leaders, concerned community members and immigrant families from the Essex County Community Organization (ECCO) will join their voices with others from across the state at Mourning Our Legislators’ Moral Failure & Demanding Action – Vigil & Rally: Protect Immigrant Families NOW! A moment of silence will be observed, mourning the lack of action, leadership and compassion exhibited by many legislators in their failure to enact protections for immigrant families in MA, the action’s Facebook page read. According to organizers, black ribbons and their message to legislators that demands immediate action to pass protections for immigrant families before the end of this legislative session will be delivered on July 31.

“I have seen countless number of immigrant patients, regardless of status, who come to the health center when ill, but who are reluctant to pursue needed medical care, decline speaking with law enforcement in the face of sexual assault or physical violence, reticent to report squalid living conditions, and to advocate for their children’s access to education in the face of fears of questions that may threaten them or a member of the family”, said Virginia Leigh, a social worker at Lynn Community Health Center. “It is beyond any comprehension how, in a state as progressive as ours, our representatives could fail their people so miserably in the midst of a crisis of these proportions.”

According to the National LGBTQ Task Force, “Lesbian, gay, bisexual, transgender, and queer (LGBTQ) undocumented immigrants account for more than 260,000 people within the community, and face harsh discrimination at the hands of a broken immigration system,” its website read.

Organizers are calling on state elected officials to act this last week of the legislative session to pass provisions of the Safe Communities Act which provides basic protections for community members, including barring police inquiries about immigration status, ensuring basic due process for immigrants, ending collaboration between local sheriffs and Immigration and Customs Enforcement (ICE), and banning registries based on country of origin or religion.

“We can’t wait any longer for families to reunite again. It’s traumatic, a pain that we can’t bear anymore,” said Isabel Lopez, ECCO Immigrant Organizer. “These basic protections for families here in Massachusetts will keep families working and doing what they have to do, like any other family here. Life without family is empty, our values revolve around them”.