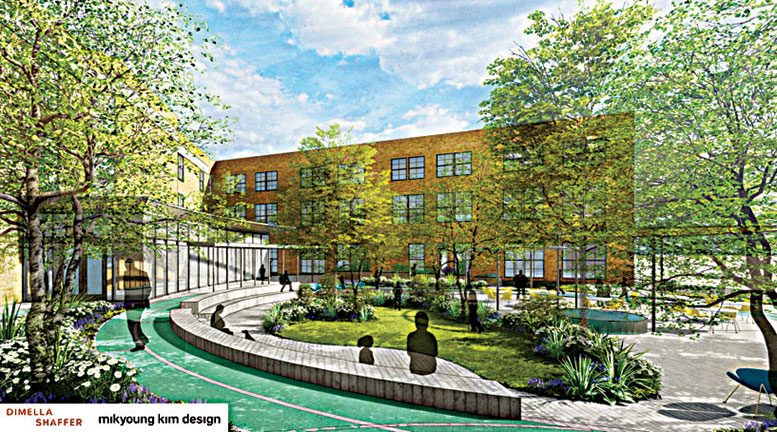 BOSTON—The first affordable mixed-income LGTBQ friendly senior housing in Boston is being proposed by the development partnership of Pennrose and not-for-profit LGBTQ Senior Housing Inc. If accepted by the city, the hope is to renovate the former William Barton Rogers School in Hyde Park into 74 rental units for seniors.

Over 20 U.S. cities already have LGBTQ-friendly senior housing and there are nearly 30 such developments across the country.  This would be the first-of-its-kind for Boston. It would also be the first in Massachusetts and the entire Northeast.

“This would be a historic achievement for the City of Boston and Hyde Park,” said Aileen Montour, President of LGBTQ Senior Housing Inc. “Hyde Park has a trailblazing history with the Grimke sisters (abolitionists) and James and William Monroe Trotter (civil rights leaders). This would add to that great tradition.”

While Boston and Massachusetts have been leaders at the forefront of LGBTQ rights, they have yet to sponsor LGBTQ-friendly elderly housing. If the development team of Pennrose and LGBTQ Senior Housing Inc. were selected to redevelop the William Barton Rogers, it would fill that missing piece. Pennrose, which developed the country’s second LGBTQ-friendly senior housing in Philadelphia and is currently developing another complex in New York City, would also serve as property manager. Ethos, a well-known and highly regarded community eldercare organization, would provide resident services.

“The redevelopment is about more than being the first LGBTQ friendly housing in Boston,” said Hyde Park resident and non-profit board member Gretchen Van Ness. “As a former Main Streets President, this plan makes the most sense. It offers a once-in-a-lifetime opportunity to knit together our community and the building by providing extensive community space, offering a home to the 54th Regiment, and partnering with the YMCA and Hyde Park Arts Association among others. We will historically preserve the school in its entirety, which is extremely important to my Hyde Park neighbors.”

Architect DiMella Shaffer’s design includes preserving the auditorium, the gym, the cinema room, and the front entrance and retains 10,000 sq. ft. of space to be used by the public that will cater to residents and the community. Community organizations can use the space for meals, events, and activities, and can hold meetings, classes, and workshops there. Pennrose and LGBTQ Senior Housing Inc. will use the building to celebrate the history of Hyde Park, honor the LGBTQ rights movement in Boston, and provide LGBTQ focused programming for the building residents and the Boston community at large, according to the organization.

Development plans include a “beautifully designed courtyard, two communal kitchens, the auditorium will host shows and events, and recreational activities like pickleball, community meals, and even a Pride party can take place in the gym,” said Montour.

The 74 units will be available at a range of incomes, making the property a possibility for anyone to live there, the non-profit management said. Pennrose and LGBTQ Senior Housing Inc. are committed to making the former school inclusive and welcoming to everyone including the LGBTQ community.

For more information about this project, contact Aileen Montour at 617.390.3384 or aileenmontour@gmail.com. To support this initiative in Boston, contact Kelly Shay directly at the City via e-mail at kshay.dnd@cityofboston.gov or the Mayor’s office at mayor@boston.gov.

LGBTQ Senior Housing Inc. is committed to facilitating access to safe, welcoming and affordable housing for low-income LGBTQ seniors, including through a formal role in the development of such housing; to define onsite housing services and programming that addresses the needs of LGBTQ seniors; and to support community space to serve seniors in the Greater Boston community.