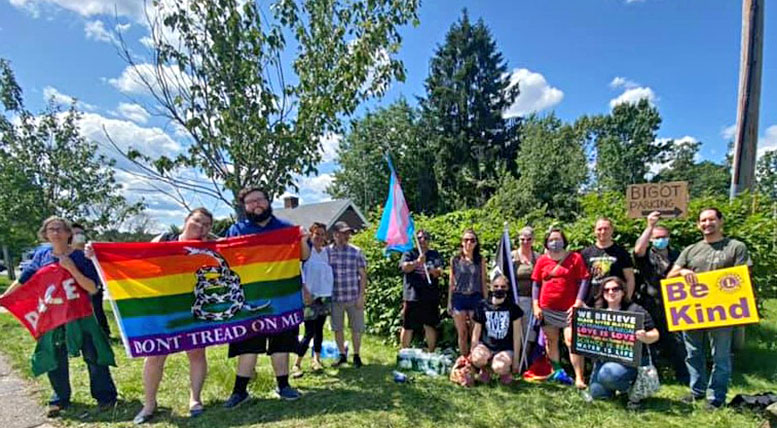 Organizers of “Super Happy Fun America,” the Producers of Straight Pride, Hosted a Fundraiser Celebrating the Riots of January 6 at the Capitol; MassEquality Counterprotested

WORCESTER, Mass.—Late last month, MassEquality counter protested a fundraiser for the Capitol insurrectionists from anti-LGBTQ+ group, Super Happy Fun America, SHFA — the same group behind the Straight Pride March held in Boston, Mass. in August 2019. SHFA hosted the event to celebrate the Capitol Hill insurrection and the seditious actors behind it at the Century Sportsman’s Club in Auburn, Mass.

“Freedom of speech works both ways,” said MassEquality’s Executive Director Tanya Neslusan, to The Rainbow Times. “The platform of Super Happy Fun America is not only homophobic and transphobic but also racist and xenophobic. As an organization that is dedicated to lived equality, it is our obligation to call out inflammatory hate speech wherever we find it and counter it with a message of love and support.”

The events of January 6, 2021, were a dark stain on the nation’s history and “remind us all of the devastating consequences of extremism,” according to the organization’s release. Their prompt action was organized to fight disinformation and to bring awareness to the community of an event that was seemingly being run under the radar.

“We also needed to ensure that local residents were aware of the event and that the organizations involved (SHFA and Proud Boys, among others) saw that they cannot infiltrate small towns and think that no one will notice,” reiterated Neslusan. “We needed to nip that in the bud.”

Super Happy Fun America, an organization whose tagline is, “it’s great to be straight” and whose ten-point plan includes language that harms the LGBTQ+ community, immigrants, and other marginalized communities sought to “fundraise” monies for “the ‘Heroes of January 6th’” according to a flyer that they put online.

“Beyond that, it is offensive to raise money for the legal defense of treasonous insurrectionists, who put Auburn’s own Congressman in danger on January 6th,” Neslusan added. “I remember vividly, seeing Congressman McGovern’s face on CNN as insurrectionists broke down the door to the chamber and feeling terrified for him. Caring about our country and our constitution is not the exclusive domain of those who promote hate speech and divisiveness.” 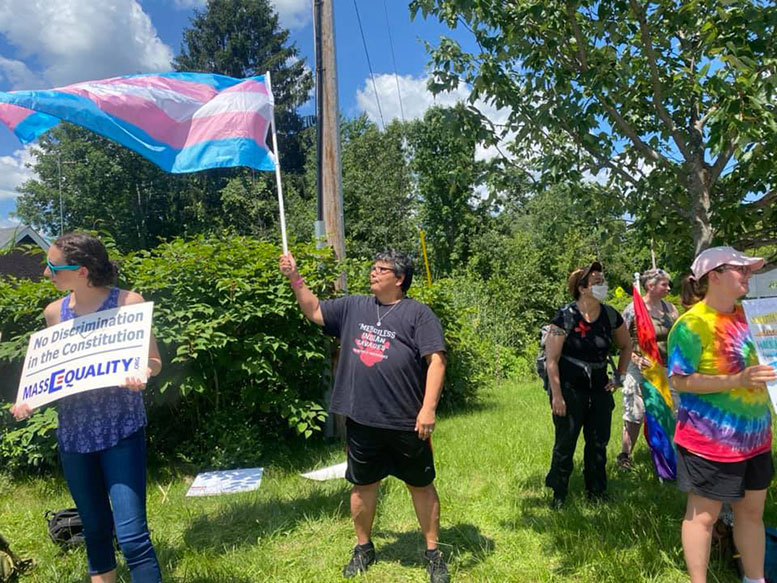 Part of the protesters; Photo: MassEquality

Many, including this publication, immediately disseminated MassEquality’s quick response via social media. They called their action “Patriots for Equity: A Counterprotest.” The counter-protest gathered at Southbridge and West Streets, in Auburn, Mass. and a few dozen people joined it.

“We had approximately 30 people attend the event, in total,” said Neslusan. “The executive director of Black and Pink (Michael Cox) came out to support us as well as several members of SURJ Worcester, a couple of members of the Libertarian Party and a couple of members of local Democratic Town Committees. Most of the attendees were local residents, who were appalled that the event was happening in their backyard.”

People from other parts of the commonwealth also went to protest this form of bigotry. One person joined this action and also happened to protest the Straight Pride Parade in Boston.

“I went to the counter-protest,” said Jeff Cohen, Co-Chair, Salem’s No Place for Hate Committee, Board member of Project Out, and an ally. “I went to the one in Boston in 2019 and really wanted to do as [I] did then … to let them know there are more who believe they are racist bigots and there are more of us than them.”

Cohen, who drove 2.25 hours each way from Salem to Auburn, wanted to get a clear message SHFA’s xenophobic actions are not welcome in most of the state. He also wanted to show support because their actions are hazardous to most Americans.

“It’s important that we stand together and support all those that white supremacist, anti-Muslim, anti-Semitic, and anti-TBQIG+ attempt to marginalize,” he said to The Rainbow Times via e-mail. “They are dangerous, creating fear wherever they go, and only when we unite, will they understand they will not prevail.” 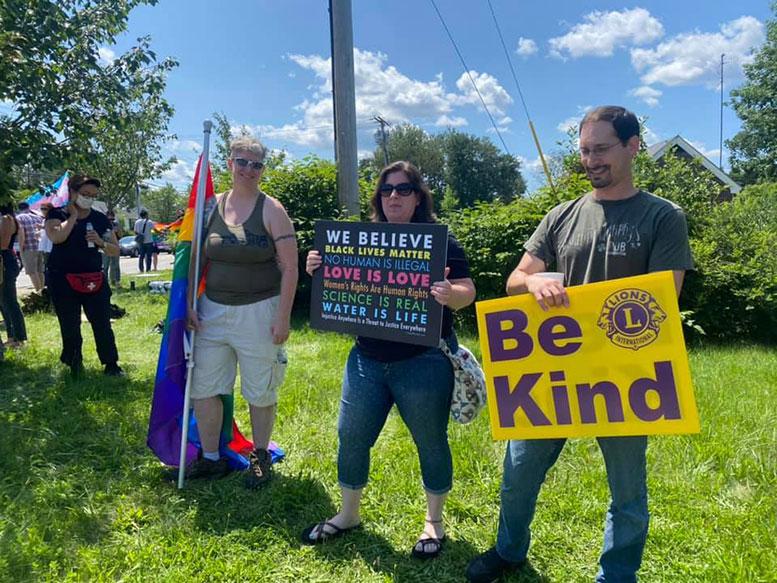 Although a couple of people drove by and shouted at them, most of the time went by uneventfully, according to Neslusan.

“We did have a couple of people drive by and yell at us, but for the most part we were receiving supportive honks and waves,” added Neslusan. “We spoke with the Auburn Police, in advance of the event, and we agreed that police presence wasn’t necessary, but they did drive by a couple of times and one of the officers did stop by at one point just to check on us and make sure that no one was giving us any trouble.”

Although it was a last-minute protest, there were seemingly more counterprotesters than those attending SHFA’s fundraising event, according to Cohen.

“The police didn’t let us get within a mile and when I left, I tried to find them, but couldn’t,” said Cohen. “[I] was told [it] was a very small group. The reception by those driving by us was excellent, at least [there were] 30-1 supporting us.”

In a report by The Rainbow Times in August 2019 about the Straight Pride Parade, SHFA aka John Hugo, organizer of the Parade, wrote via their website then that they organized the event to “achieve inclusivity and spread awareness of issues impacting straights.” Hugo, who has made his anti-LGBQ and Trans statements in the past via social media, wanted his “straight flag” to be flown at City Hall, according to a Fox News interview in June 2019.

Mostly white straight males at the time of the Straight Pride Parade, with obscuring attire — MAGA Hats, sunglasses, US Flag bandanas, to conceal their identity — attended the parade while holding signs in support of Trump’s re-election campaign then while holding prejudiced signs against oppressed groups. Some of the signs read: “Make Normal Seem Normal Again; Unite America 1st; Flag, Nation, God; Drain The Swamp; Secure America’s Borders; 2020 Trump; In God We Trust; It’s Great To Be Straight;” and another banner displaying a caricature of Trump flipping off the crowd.

“This was clearly a parade rooted in white supremacy and was a blatant Trump 2020 re-election event,” said Noelle Nickerson*, a counterprotester, in 2019. “It was obvious that the marchers and their message had nothing to do with straight pride and everything to do with ensuring that the majority stays in power.

MassEquality, in this latest instance, took direct action to oppose the spread of hate and the promotion of insurrection and disinformation in the community.

While MassEquality supports the right of all Americans to lawfully assemble, the organization also backs the right of counterdemonstrators to gather and peacefully express concern about the motives or message of those assembled and as “an organization that promotes lived equality for all members” of their community, Neslusan said, “we cannot sit by idly and allow hate to go unchecked.”

MassEquality is the leading statewide grassroots advocacy organization working to ensure that everyone across Massachusetts can thrive from cradle to grave without discrimination and oppression based on sexual orientation, gender identity, or gender expression. We partner across identities, issues, and communities to build a broad, inclusive, and politically powerful movement that changes hearts and minds and achieves policy and electoral victories.

[Originally published in the August 12, 2021 Issue of The Rainbow Times].