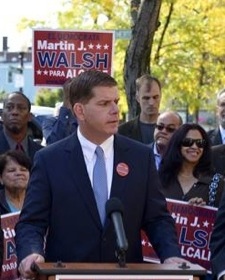 BOSTON—Matt Wilson, MASSCreative Executive Director, made a statement yesterday on Boston Mayor Marty Walsh’s announcement that there will be a Chief of Arts and Culture in his cabinet.

“History was made last week when Boston Mayor Martin Walsh announced that there will be a Chief of Arts and Culture in his cabinet,” said Wilson. “This position will report directly to the Mayor alongside the Police Commissioner, Superintendent of Schools, and seven other cabinet officials.

“Other municipalities around the country including Philadelphia and Chicago show what can be accomplished with a cabinet-level cultural officer working directly with the Mayor to build community. We look forward to working with the Administration and its new Chief of Arts and Culture on strategic arts initiatives that will impact the entire Greater Boston area.”

Founded in 2012, MASSCreative works with creative leaders and entrepreneurs, working artists, arts educators, and arts and cultural supporters to empower creative organizations and the public with a powerful voice to advocate for the resources and support necessary to build vibrant and connected communities.