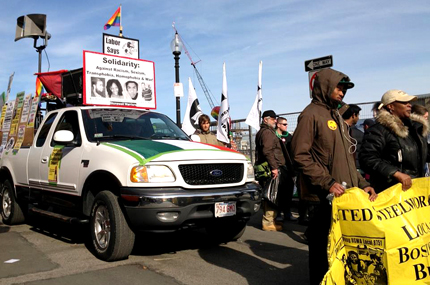 By: Keegan O’Brien*/Special to TRT —

On St.Patrick’s Day, Sunday March 17, 2013, the Allied War Veterans Groups once again prohibited any Lesbian, Gay, Bisexual, Transgender, and Queer (LGBTQ) or peace organizations from participating in Boston’s annual St.Patrick’s Day parade. In 2011, Veterans for Peace was denied the right to march by parade organizers. So, they approached LGBT organizations and asked them to form an alternative parade—the St.Patrick’s Day Peace Parade. For the third year in a row, hundreds of LGBT, peace, and social justice activists took over the streets of South Boston to vocalize their message of equality and justice.

Unfortunately, homophobia and discrimination aren’t limited to Boston when it comes to St. Patrick’s Day Parades. Parade organizers around the country, from New York to Cincinnati, have banned LGBTQ and peace groups from participating.  For most, the news is shocking. The idea, that in 2013, a major national event could exclude people on the basis of their sexual orientation/gender identity or opposition to war is outrageous.

But if you ask the Supreme Court, parade organizers have every right to practice discrimination. Since 1993 the Allied War Veterans have banned LGBTQ groups from participating in the annual parade. The fight even went all the way to the Supreme Court, and in 1995 the court ruled in favor of the parade organizer’s right to exclude LGBTQ groups.  Thank God for those precious American freedoms, just not if you’re queer or happen to oppose the government’s foreign policies.

At the most basic level, the idea that you could hold an event celebrating the cultural heritage and historical experiences of Irish Americans while simultaneously excluding entire sections of our community is ridiculous. Parade organizers’ decision to exclude LGBTQ groups from the parade demonstrates that homophobia is not only alive and well, but given permission to thrive by the most powerful legal institutions in the country.

Unfortunately, this type of discrimination and exclusion is not the exception, but the unspoken norm for LGBTQ people. While Obama has come out in favor or same sex marriage, LGBTQ people still remain second class citizens. In 29 states, it is completely legal to be fired or not hired due to your perceived or known sexual orientation—in 37 states, the same lack of protection applies to gender identity or expression. Thirty seven states have passed constitutional amendments banning same sex marriage.

While we’re flooded with stories about the new Catholic Pope — a proud homophobe — there is an epidemic of LGBTQ youth suicide and homelessness that is completely ignored by those in power and the corporate media. Most schools continue to either ignore or lack the resources to address the epidemic of anti-LGBTQ bullying, never mind promoting an LGBTQ inclusive curriculum. Parade organizers across the country ability to exclude LGBTQ groups—reaffirmed by the Supreme Court—adds insult to injury in a society that already oppresses and marginalizes LGBTQ identifying people.

The Irish know all too well what it’s like to be oppressed, otherized, and discriminated against. It seems like parade organizers have forgotten centuries of Irish history; living under British Colonialism and military occupation, decades of institutionalized discrimination and cultural prejudice in the United States,  and enormous struggles for national independence and social equality.  Though not all parade organizers have forgotten their history. The St. Patrick’s Day parade in Dublin this year featured the largest LGBTQ contingent ever.

It’s called solidarity with the oppressed, something parade organizers are willing to abandon in their rush to celebrate U.S. militarism and bigotry.  Thankfully, The Allied War Veterans Group doesn’t speak for all Irish Americans. The St. Patrick’s Day Peace Parade organized by LGBTQ, peace, and social justice groups demonstrates the power of solidarity politics and provides a vision of what it will take to make the dream of full equality and social justice for LGBTQ people a reality —collective struggle.

*Keegan O’Brien is a long time LGBTQ youth activist in Boston, anti-war organizer, a student at U Mass Boston, a former board member of BAGLY,  and member of the International Socialist Organization in Boston. He also has written extensively on LGBTQ social justice related issues for SocialistWorker.org and has helped organize the first St.Patrick’s Day Peace and Equality parade.