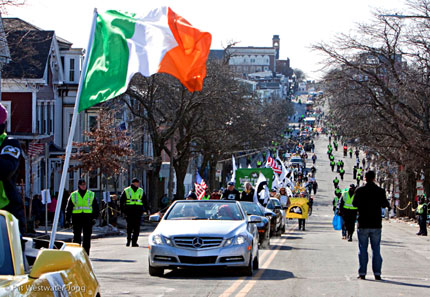 BOSTON, Mass.—Last month, the local Veterans for Peace Chapter 9, Smedley D. Butler Brigade (VFP) filed a First Amendment lawsuit against the City of Boston for refusal to act in a timely manner on VFP’s application for a permit to hold its annual St. Patrick’s Peace Parade, which typically follows the South Boston St. Patrick’s Day Parade and is scheduled this year for March 15.

“Going to court was our last resort,” said Pat Scanlon, coordinator for VFP.

Scanlon said VFP submitted their application to the City of Boston in March 2014 for the 2015 Peace Parade. According to him, The Allied War Veteran’s Council (AWVC), who host the South Boston St. Patrick’s Day Parade, filed their application in October, and the Boys and Girls Club filed for a permit for their road race in November.

For the past five years, VFP has submitted their application to the city requesting a noon start time for the Peace Parade. Each year, according to Scanlon, the city tells VFP that if their parade was to start at that time, it would interfere with other activities on that day. Therefore, the Peace Parade has been ordered to walk one mile behind the AWVC parade.

“The action of the city results in our parade being marginalized and our messages of peace and inclusion diminished, instead of hundreds of thousands seeing our messages of peace and inclusion,” Scanlon said. “By the time our parade comes by, most of the revelers have left, leaving behind a few thousand party leftovers who do get to see our messages, though it is questionable just how well many of them can see by that time. By putting our parade behind the other parade … the city has given preference to and in fact has chosen one message over another. In situations such as this, constitutionally the city should remain neutral, but that has not happened.”

Scanlon said this is why the lawsuit was filed, in order to uphold VFP’s rights unders the First and 14th Amendments, with the hope that the City of Boston will issue their permit to start the parade at 12 p.m., ahead of the other parade, which is set to begin at 1 p.m.

Wunsch noted that the ACLU has long defended the rights to freedom of speech and assembly, and has represented VFP in past efforts to have their message heard. She also noted that other than the initial contact when VFP filed for their permit, the City was contacted several times, both by VFP and its lawyers, attempting to get a response.

“We got one response, that they had received one of our letters,” Wunsch said. “That was it.”

In years past, the AWVC has barred VFP and LGBTQ groups from marching in the South Boston St. Patrick’s Day Parade, the right to which the Supreme Court upheld in 1995. However, Wunsch noted that “doesn’t mean the City can ignore the application by Vets for Peace to parade earlier in the day or can force them to parade after the AWVC parade.”

Earlier this year, the AWVC agreed to allow one LGBTQ group, OUTVETS, to march in the 2015 parade. However, according to the Scanlon, the group continues to bar most gay rights, peace and environmental groups. According to the AWVC’s Parade Rules and Regulations, posted on their website, “it is not the policy of the Council to exclude or deny access to our parade on the basis of sexual orientation. What is not permitted is the inclusion of any individuals or groups that have messages, flags, banners, displays or symbols, attire, or speech in any form, that celebrates, advocates sexual identity or orientation.”

“Could this be the height of hypocrisy?” Scanlon said. “In other words, any member of the LGBT community is welcome in their parade as long as no one can identify them, if they remain closeted and be quiet. Of course no openly gay/lesbian group can be in their parade carrying signs such as ‘I’m Irish, Gay and Proud.’”

Scanlon said that VFP does celebrate the fact that OUTVETS has been admitted to join the South Boston parade.

“It is at least a step in the right direction and a long time coming,” said Scanlon. “The question is: does this satisfy the LGBT community? As veterans, what puzzles us a little bit is that other groups from the LGBT community are still prohibited from participating in that parade. We have a saying in the military, ‘no one is left behind.’ Yet, in this instance OUTVETS seem to be leaving their LGBT brothers and sisters behind. Now that they have been allowed to walk in that parade, how brave it would be for them to simply stand with the LGBT community and choose not to walk until their brothers and sisters can openly join them. OUTVETS are certainly welcome and invited to openly walk in the Saint Pat’s Peace Parade with all the other LGBT groups.”

Scanlon said he thinks it is very unlikely that there will ever be a joint parade, “unless the City of Boston takes over the organizing of that parade and insists that all parades on the streets of Boston be open and welcoming to all.”

According to Scanlon, “The Saint Patrick’s Peace Parade encourages marchers to openly express who they are and what they stand for, proudly celebrating the messages of peace, equality, jobs, environmental stewardship and social and economic justice.” The parade has eight divisions—Vets for Peace, Peace, Religious, LGBT, Climate Justice, Political, Labor, Social and Economic Justice—bands, floats, vehicles, and about 2,000 marchers each year. He also noted that they have received a great reception in South Boston.

“Unbelievably, the AWVC has told us in the past that they did not want us in their parade because they did not want the word ‘peace’ associated with the word ‘veteran,’” Scanlon said in an ACLU press release. “St. Patrick was a man of peace, so the celebration of St. Patrick—the patron saint of Ireland—should be a day to reflect on and celebrate this great saint’s deeds and words. Veterans for Peace celebrates the life of Saint Patrick and the proud Irish traditions without militarism. Our Peace Parade celebrating St. Patrick’s Day is inclusive and open to anyone who would like to walk for peace. As far as we know, this is the only annual peace parade anywhere in the entire country.”

Boston Pride President Sylvain Bruni said their organization will march in the Peace Parade once again this year.

“The mission of Boston Pride is to provide visibility to our community, and the Peace Parade is a great opportunity to bring rainbows to South Boston and to show to members of the LGBT community in South Boston that there exists a safe space for them during the St Patrick’s Day celebration,” Bruni said. “We also participate in order to stand in solidarity with all other groups which are discriminated against by the organizers of the St Patrick’s Day Parade. Let’s not forget that the labor and anti-war movements have supported the LGBT movement from the onset of our struggle. Therefore it is our duty to stand strong with them. Whether we agree or not with their message, we must fight for their right to express themselves.”

Boston Pride has applied to march in the South Boston St Patrick’s Day Parade as well, but have yet to receive a response.

“The existence of a separate Peace Parade will be necessary as long as the traditional parade discriminates against anyone,” Bruni said. “All groups should have the right to celebrate our men and women in uniform and/or their Irish descent, no matter what their background is or what their method of expression.”

Erica Kay-Webster, founder, CEO, and president of the Foundation for International Justice Inc., gave her take on marching in the parades.

Scanlon said that VFP “fully expect to win” the lawsuit and hold the Peace Parade again this year, and that between 40 and 50 groups are scheduled to participate.

“If we do win, we are hopeful that the courts will order the city to issue us a permit for a start time of 12 p.m. ahead of the other parade, so the difficulties, insults, indignities, exclusion and marginalization we have endured over the past five years will all be worth it,” said Scanlon. “In the future, next year and beyond, all the different messages will have equal representation on the streets of Boston. For once, peace will not be a dirty word in South Boston and our LGBT brothers and sisters will be able to walk proudly and openly alongside their friends, Veterans For Peace. The reception our parade has received has been overwhelmingly positive over the past four years. This year I think it will blow our socks off.”

Scanlon said a court hearing date has been set for March 2.

The City of Boston did not return TRT’s request for comment. TRT also did not receive a response from OUTVETS before deadline.