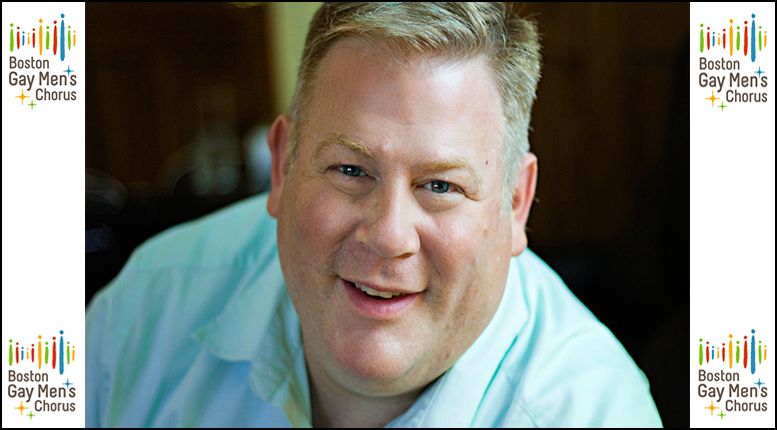 Citing the example of Harvey Milk, Coogan’s remarks emphasized the importance of LGBTQ visibility, along with the power of art to counteract the recent spike in attacks on LGBTQ people, Muslims and other minority communities. “The one constant—no matter whose stage we’re on,” Coogan said of the chorus, “is that we create musical experiences that inspire change, build community, and celebrate difference.”

Here is the full text of his speech:

My name is Craig Coogan and I’m proud to be the Executive Director of the Boston Gay Men’s Chorus. We were founded 35 years ago and are one of the original gay men’s choruses formed in the wake of Harvey Milk’s assassination. Milk, of course, was the first openly gay elected official in the country, and before he died, his singular message to the LGBT community was to come out.

We’ve done exactly that. The approximately 1,600 members who have sung with us over the years have performed in church basements and community centers; at middle schools, high schools and universities; and—during the 1980s—at more AIDS memorials than we can count. In the 90’s we sang at weddings.

We’ve performed in front of packed audiences at Jordan Hall, Symphony Hall, and Carnegie Hall. In 2005, we sang in front of 700,000 people at the Brandenburg gate in Berlin, and became the first gay chorus to sing in Poland. Protestors tried to shut us down, but with the help of riot police who protected our audience—and escorted us—the show went on. The protests and concert received international media attention and a common newspaper headline the following day was “Music Triumphs Injustice.”

In 2015, we sang at the Inaugural gala for Governor Charlie Baker. That same year we toured Israel and Turkey, becoming the first gay chorus to perform in the Middle East. Turkish President Erdogan tried to cancel our concert by ordering the performance center to break its contract with us. We tapped into the local LBGTQ community that figured out a solution which involved a parking lot, a stage once used by Elton John, jumbo-trons, and about 5,000 of the most enthusiastic people we’ve ever performed in front of.

The one constant—no matter whose stage we’re on—is that we create musical experiences that inspire change, build community, and celebrate difference.

The Equality Fund grant is going to help us create one of our most unique musical experiences to date. The cash is always helpful but it’s especially great to be working with the Fund and the Boston Foundation which brings so much support and infrastructure. It really helps a small organization like us.

“A Peacock Among Pigeons” is an LGBTQ-themed children’s book that tells the story of learning how to stand out when you don’t fit in. It’s won a bunch of awards.

We’re going to take the story and give it to Broadway composer John Bucchino. For those of you who don’t know John, he’s best known for scoring the Broadway musical “A Catered Affair” and for creating music that’s been recorded by a range of artists from folk pop icons like Judy Collins and Art Garfunkel to theater luminaries like Kristin Chenoweth, Audra McDonald, and—of course—Liza Minnelli. I mean what would you expect? We are a gay chorus!

With John’s help, we’re going to create an absolutely amazing multi-media production that will have music for men’s voices and children’s voices. Think custom animation. And costumes. It’s probably a safe bet that feathers will be involved.

But, more seriously, “A Peacock Among Pigeons” tackles bullying in a powerful way, and our staging of that story through music will be the Boston Gay Men’s Chorus’s response to the frightening rise in attacks we’ve seen this year on LGBTQ people, Muslims, and other minority groups.

Legislation and law enforcement are critically important in responding to this kind of violence. But neither the law nor the law enforcer is capable of changing hearts and minds. Our music can. We experienced it when we were in Israel and Turkey. We experienced it in Germany and Poland. And we experience it all the time on high school stages throughout Massachusetts. Music builds bridges across groups of people that otherwise have nothing in common. It breaks down stereotypes and gives humanity to people who are routinely dehumanized.

I can’t even begin to say how excited we are about this project, and we’re tremendously grateful to the Equality Fund at the Boston Foundation for getting us started. I can’t wait to share the final product with all of you. Those of us who make our professional lives at LGBTQ organizations (call us ‘professional gays’) never believed the conventional wisdom that once we had won the right to marry in all 50 states that the battle for LGBTQ equality had been won. Because we know better. The groups in this room do such amazing work. You know. We see every day the work that needs to be done even here in Massachusetts, which is one of the best places in the country to live as an out LGBTQ person. The existence of The Equality Fund—a permanent source of funding that’s dedicated to supporting our lives and our community now and into the future—is a tremendous asset.

On behalf of our Music Director Reuben Reynolds, our Board of Directors, and our 300 active singing members, thank you for letting our voices be heard!