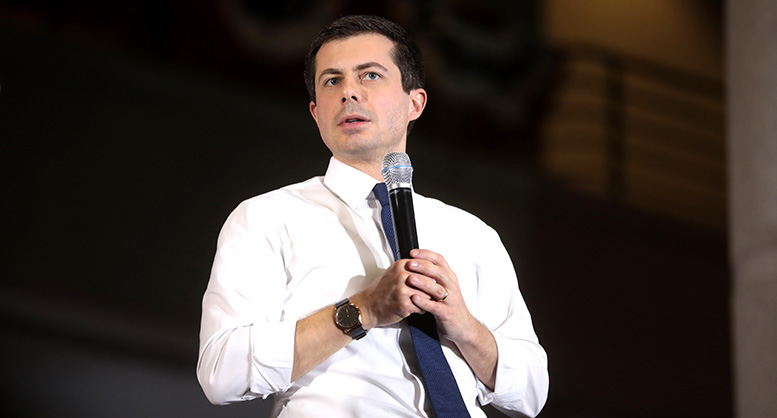 Buttigieg has a long history of racial exclusion.

“I’m not asking for your vote,” is a phrase and video that I cannot get out of my mind as presidential hopeful Mayor Pete Buttigieg emphatically said to a crowd of Black Lives Matter folks. They were gathered together in South Bend, Indiana, regarding a series of racial injustices that occurred in the police department, of which he was mayor.

Burned into my mind is an arrogant, privileged and laissez-faire attitude regarding the legitimate concerns of the group gathered that day. When I think of the President of the United States, I don’t think of Trump, certainly, but rather President Obama and others before him that have held themselves to a higher level of integrity. When I hear another white cisgender man captured on video unconcerned about getting the black vote, as he said that day, it alarms me on more fronts than one.

Any presidential candidate that blatantly doesn’t care about the concerns of racial and ethnic oppressed groups will not get my vote either, even if he is a member of the LGBTQ+ community. I can’t. I won’t support a candidacy that is riddled in privilege—for someone who shows no regard for other marginalized groups, groups that exist in _his_ own LGBTQ+ community too.

But, it goes deeper than that.

Three months later, they were gone. Buttigieg stripped them of their positions and whitewashed his administration.

In the U.S., there are many forms of racism—overt, covert and the kind that runs like a silent current drifting under a frozen winter river. What Mayor Pete exhibited that day was blatant.

According to an editorial published by The Root, author Michael Harriot wrote, “In America, racism doesn’t always present itself in the bold attire of venomous hate. Most often, white supremacy is cloaked in a suit and tie. It rarely looks you directly in the eye or stares with disdain. It is so vast and wide that it often overlooks your comparatively microscopically small existence. It reduces your desperately loud pleas for acknowledgment to a faint whisper. It makes you feel unseen and unheard.”

According to EdBuild.com, a non-profit dedicated to “bring common sense and fairness to the way states fund public schools,” white school districts receive $23 billion more in funding than non-white districts.

“Courts sentence black men to prison terms that are 20 percent longer than those of white men who commit the same crime because the criminal justice system overlooks inherent bias,” Harriot said. “This is why it is easy to believe the judges, school boards and employers who contend that they ‘don’t see race.’ To be black is to be invisible.”

And, that must change.

Currently, every marginalized group in this country is unheard. We were warned about Trump and now we’ve seen evidence of Buttigieg engaging in similar pompous behavior toward the black community. Don’t take my word for it, “Google it.”

I want a candidate that understands the complexities of racial, ethnic, gender, and sexual inequities in this country, who understands that not everyone gets a fair shake in life. Although, white folks have difficulties too, the color of their skin is not what brings on those difficulties. That is the definition of privilege that I use here. White privilege doesn’t mean you don’t have problems, it means your race is not a cause of those problems.

As the primary season carries on, I urge all of those that can to participate in democracy, learn about the candidates, their background, and their honesty. Diversity does not mean that just because you are a member of a marginalized group like Buttigieg is, that you understand the struggles of others.

This is why I’ve personally never been behind Buttigieg, and then some. As a member of a marginalized group himself, he should know better but his lengthy track record proves that he does not represent the intersectionalities of our collective existence. In fact, he has stepped all over it. We don’t need more racists in office.

*Nicole Lashomb is Editor-in-Chief of The Rainbow Times. She holds a BM from the esteemed Crane School of Music/SUNY Potsdam and an MBA from Marylhurst University. Nicole can be reached at editor@therainbowtimesmass.com.

Embracing Your Light to Awaken Others