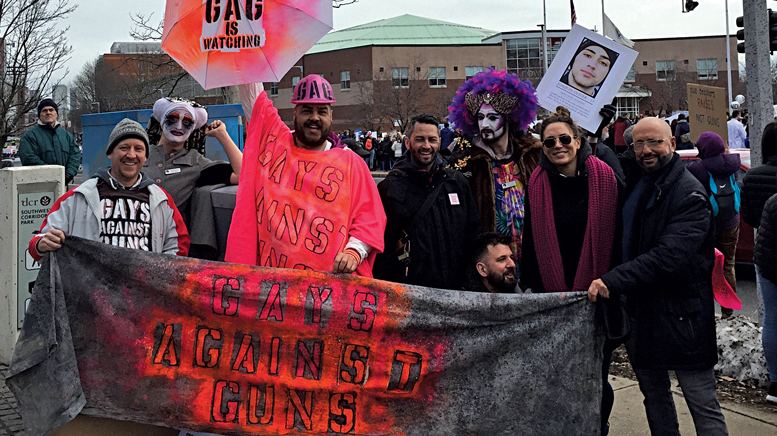 GAG: A group of protesters with the Gays Against Guns contingent at the March 24 rally against gun violence; photo courtesy of Nicole Collins

Gays Against Guns: Members of the LGBTQ community join with anti-gun activists to decry gun violence in a post-Parkland political climate

In the wake of the February 14 Parkland, Florida shooting at Marjory Stoneman High School in which 17 students and faculty were killed and 14 were injured, countless groups across the nation held anti-gun violence demonstrations, including the “March for Our Lives” protest on the Boston Common late last month.

Among those on the Common was Gays Against Guns (GAG), a New York City–based LGBTQ organization that aims to nonviolently end gun violence and disempower elected officials behind pro-gun policies.

“We see ourselves as a united front fighting for the safety of our community, but also for the larger, non-LGBTQ community,” said John Grauwiler, one of the head organizers of the New York City Chapter. The group organized “March for Our Lives” protests in, among other places, Washington, D.C. and New York.

And though GAG’s Boston Chapter is still in its early stages, founder Izzy Berdan hopes to organize events and demonstrations following the Parkland shooting.

“The Boston Branch is … forming as we speak,” he said in early March. “In the last week, I started talking with the [national] offices and … put together a Facebook page.”

Berdan has an incredibly busy schedule—from working, making art, and performing with the Boston Gay Men’s Chorus—but he recognized a need for the group.

He also wanted GAG to have representation at the “March for Our Lives” demonstration. Including Berdan, eight people showed up for GAG at the protest.

“It’s a cause that a lot of people are passionate about right now, for good reason,” said Matt Broderick, a friend of Berdan’s who took photos for the group at the event. “It’s good to get people together out there and marching for this.”

“Orlando was a year and a half ago, and there was a similar effort [then], but it just didn’t go anywhere,” added Bruce Cramer, march participant with GAG and teacher at the John D. O’Bryant School of Mathematics & Science (https://obryant.us). “Now … some teenagers have empowered themselves … [and] they’ve empowered many more than just students. I think it’s great there’s this momentum going now.”

The group was brought to Berdan’s attention when his friend Carl Anhalt, a teacher from New York City, asked him to participate with GAG in the city’s Pride Parade.

“It was an amazing experience for me, and a healthy way for me to channel my energy [into] positive change,” he said.

“We’re disproportionately affected by gun violence,” Bertan continued. “We’re the most likely group to be victims of a hate crime, and if that hate crime includes a gun, it’s more likely to be a homicide.” The LGBTQ community is also, “more likely to attempt suicide—especially trans youth. A gun makes suicide attempts almost guaranteed to be lethal.”

According to a report by the National Coalition of Anti-Violence Programs, in 2014, transgender women of color were at a much higher risk of discrimination, violence, and harassment compared to other non-LGBTQ survivors. And a 2017 Trevor Project report ) claims that by age 25, 92 percent of transgender adults have attempted suicide.

“The intersection between being LGBTQ and a person of color is tied to a greater likelihood of being targeted and hurt,” said Hayley Gorenberg, General Counsel for LGBTQ rights firm Lambda Legal and author of a 2016 blog post describing the importance of uniting the anti-gun and LGBTQ communities.

“We need to put [the] truth out about gun violence and the queer community,” she said.

The Pink Pistols, a pro-gun LGBTQ organization, decided not to hold any counter-demonstrations.

“I don’t personally think that counter-protests are inherently useful; I’d rather talk about what I’m for than what I’m against,” said Aaron Grossman, Boston resident, and organizer of the city’s Pink Pistols chapter. “I support people speaking out for what they believe in … [but] I don’t share their views.”

The group, in many regards, defies popular stereotypes of gun-owning communities.

“If anything, we’re a liberal organization,” said Grossman. The Pink Pistols aim to enable marginalized communities to protect themselves by providing them with firearms. “We don’t tend, as an organization, to be in favor of increased gun control because … it serves mostly to disenfranchise poor people … and queer people [and] people of color.”

And like many others, after receiving word of the Parkland shooting, members of the Pink Pistols were shocked. “The general reaction,” Grossman said, “was the same as any other: ‘This is a terrible event,’ ‘This shouldn’t have happened.’”

The Pink Pistols were founded in Boston in 2000 by Douglas Krick—former Massachusetts state representative candidate for the Libertarian Party—and soon grew to include around 45 chapters and roughly 9,000 members across the United States. Eventually, Krick moved away, and the Boston group dissolved.

Following the 2016 Pulse Nightclub shooting in Orlando, Florida, Grossman began to search for a Boston branch of the Pink Pistols. Finding none, he took the initiative and founded the group.

The revived chapter has been meeting for about 18 months and has 15 to 20 frequent members.

According to Grossman, joining the LGBTQ and gun-owner communities is vital.

A lot of people, “[say] they’re more comfortable being openly gay in a gun community than they are being openly a gun-owner in a gay community,” he said, “which has been my experience, too.”

For Grossman, it’s important to help bridge that gap.

Massachusetts is known to have some of the strictest gun control measures in the United States.

It has consistently maintained bans on certain assault weapons and was one of the first states to enforce instant electronic background checks when purchasing firearms. The Commonwealth has often remained one step ahead of federal gun control measures.

“Mass. has an extremely complicated, complex … set of gun laws,” said Karen MacNutt, an attorney who authored an outline of the history of gun control in the Commonwealth. Based in Randolph, Mass, MacNutt is the legal editor for Women & Guns, a women’s firearm publication based in Buffalo, New York. “It’s like every time something bad happens in some other state, the legislature in Massachusetts feels the need to pass a law.”

However, Berdan feels that gun control advocacy is part of an intrinsic need to protect others and a desire to expose manipulative practices on behalf of elected leaders.

“Part of being queer is living an authentic life, being true to who you are and having conviction in your choices,” Berdan said. “With this authenticity is a desire to see more of it in the world. [Gays Against Guns] is all about exposing lies and corruptness in our politicians and elected officials.”

“This is all about transparency. Praise people who are trying to protect our community, our children, our country, and putting faces and names to those … whose mission it is to fill every set of free hands with a gun.”

“After the Parkland tragedy, I think we need to do some serious ethical introspection as a country,” said Dylan Goodman, GAG member, and Somerville-based union organizer. “As individuals, we need to become more [aware] as to how our money is connected to America’s gun industry, and as a community, we need to center the frontline voices of those hurt by gun violence.”

[This story was originally published in TRT’s April 5, 2018 issue].