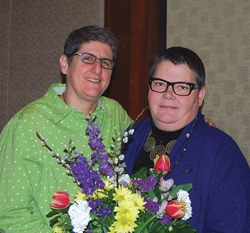 BALTIMORE — A Catholic symposium dealing with gay and lesbian relationships in the Church concluded on an affective note here when the woman who was denied communion at her mother’s funeral spoke poignantly about the experience.

“It’s my mother’s love and compassion, and willingness to stand up for what is right that you see standing before you today,” Barbara Johnson told conference attendees.

Denied communion for being a sinner

During the funeral Mass on Saturday, Feb. 25, in Gaithersburg, Md., Rev. Marcel Guarnizo refused the Eucharist to Johnson, telling her, “I cannot give you communion because you live with a woman, and in the eyes of the church that is a sin.”

The communion incident caused a media stir and dismayed Catholics nationwide and around the world.

In the several weeks since, detractors have attempted to discredit Johnson, a 51-year-old artist, labeling her an activist, Buddhist, communist, and even atheist.

But Johnson would have none of it on St. Patrick’s Day.

A lifelong Catholic and former Catholic schoolteacher, Johnson lives in Washington, D.C., with her partner of many years.

“What I want to share with you today is the story of a daughter, a lesbian daughter, who felt her mother’s love and acceptance deeply,” Johnson told several hundred people during the closing session of New Ways Ministry’s Seventh National Symposium on Catholicism and Homosexuality (March 15 – 17).

A Catholic’s mother’s love and acceptance

“I remember when I first came out, and my mom was not happy,” said Johnson. “Each year at the Gay Pride parade, I would stand and applaud those P-FLAG moms and dads for their courage and their compassion. And I would pray that one day mom and dad would walk beside me in that contingent.”

“As I got older, I stopped needing parades,” Johnson continued. “And what I got was even better. I got a life where my mother and father adored my life partner. I got a life where my parents walked me down the aisle at our (not so legal) wedding. I got a life where, on our last happy time together, I thanked my mom for accepting and embracing me and for loving my partner so much. Her response was to pat Ruth on the leg as she looked her in the eye with the most beautiful smile and said, ‘I wouldn’t have it any other way — right?’”

As Johnson spoke, any number of symposium attendees fought back tears.

“You see Midge and Dick Johnson’s youngest daughter who is deeply heartbroken her parents are no longer here on this earth with her and her family,” said Johnson.

“For there is no more amazing state of grace than the one I was honored to receive as my mother allowed me to witness her passing from this life and into the dancing arms of my dad.”

Other Catholic priests apologize to Johnson

Afterwards, Johnson said several priests approached her, apologizing on behalf of the church for the painful incident and the priest’s pastoral insensitivity.

For his part, Father Guarnizo insists, “I did the only thing a faithful Catholic priest could do,” in refusing communion to Johnson, he said, according to a written statement that he issued on March 14 and was first published by Catholic News Service.

On March 9, the Archdiocese of Washington, D.C. removed Guarnizo from ministry and placed him on administrative leave pending an investigation of allegations of “intimidating behavior.”