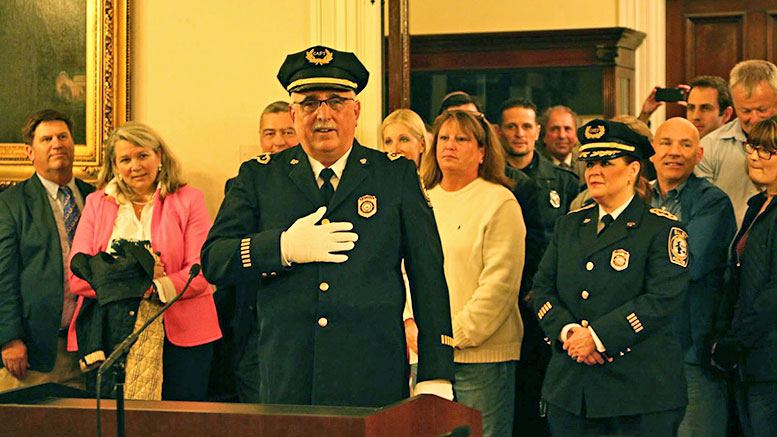 Local & National Police Departments work to improve how they work with this marginalized community; from Salem to LA, the law enforcement agencies show their evolution

According to SPD Captain Conrad Prosniewski, the department issued the patches in recognition of LGBTQ pride and the Massachusetts midterm ballot question on transgender public accommodations access that was overwhelmingly upheld in November.

The patch program started when, in May, a retired officer from the Pittsburgh Police Department sent Prosniewski an LGBTQ awareness patch his department was making. Prosniewski then spoke to his supervisors and patches were put into production shortly after.

Prosniewski emphasized the importance of the patches for the SPD and Salem community.

“Salem is a very unique community,” he said. “It’s diverse in many, many ways. [And] there’s a history that goes with Salem—the witches. What happened here in 1692 is taught to all the [grade] school kids who go through any of the Salem schools. [It’s] our lesson in acceptance.

Prosniewski also added that he grew up in Salem and such acceptance has been representative of the community his whole life.

In addition to the patch program, the SPD also participates directly in Salem’s No Place for Hate Committee—a city organization dedicated to fighting discrimination—of which Prosniewski is the police liaison.

“They’re always coming up with different kinds of initiatives,” he said.

The SPD isn’t the only station that supports protections for LGBTQ people.

“The liaison works closely with the LGBTQIA community on a variety of events and issues,” said Sharon McQueen, the LGBTQ liaison for the Worcester Police Department (WPD). “[I have] gained momentum with connecting and building relationships with various groups.”

As part of her duties, McQueen often facilitates training sessions with police officers within her department and also other local agencies.

The City of Worcester has a range of policies related to LGBTQ people, including a policy on interactions with members of the transgender community, an affirmative action employment policy, and a link to LGBTQ-affirming resources in the city.

McQueen also takes on a number of speaking engagements with the public, including lectures at Quinsigamond Community College, Worcester State University, and the LGBTQ+ Medicine Program at the University of Massachusetts Hospital in Worcester.

Darius Varmahmoodi, president of the Gay Officers Action League of New England (GOAL NE), a network of more than 200 public safety professional across New England, said that there are several departments across New England that have strong relationships with the LGBTQ community.

“Some police departments that certainly deserve recognition for their support of GOAL NE and the LGBT community over the past few years are Attleboro Police, Mansfield Police, Provincetown Police, East Providence RI Police, and Warwick RI Police,” he said. “These agencies have offered a police cruiser to participate in pride parades that we have marched in.

“Our organization has also been receiving more requests for training over the years. The training requests have not only been from police academies, but also from different agencies at the local, state, and federal level, which want their officers educated on the LGBT community.”

When it comes to fostering positive relations between the LGBTQ community and police officers, Varmahmoodi said that a lot of friction is caused due to a, “ … lack of education, understanding, and sometimes ignorance.

When it comes to one piece of advice that he wants to offer law enforcement agencies, he said the following.

“The main practice that I would advise agencies would be to implement more diversity and LGBT training to their officers or employees. Anyone who has any encounter with the police just wants to be understood. It is our job to do our best as officers to attempt to understand each individual’s perspective. If more officers were educated and informed on the LGBT community, I believe the percentage of positive interactions would increase and the percentage of negative interactions would decrease.”

The program was recommended to the LAPD after the department’s LGBTQ Working Group observed another Safe Place initiative starting and succeeding in the Seattle Police Department under SPD/LGBTQ Liaison Officer James Ritter. The initiative includes placing a recognizable decal with the Safe Place symbol (rainbow), which is displayed at certain premises. LGBTQ people, according to the city’s website, would “recognize the SPD SAFE PLACE symbol of safety” which indicates to the members of the community “ that your business, organization, school or premise is willing to assist and protect these victims.” The participating establishments are then instructed—via a series of steps—to follow a protocol in the event that a situation arises where someone may need protection.

LAPD Safe Place was started in 2017 to bring attention to anti-LGBTQ violence.

“[It] was launched to raise awareness about anti-LGBTQ crimes and to also help encourage other people to report hate crimes,” said Sergeant Jules Sohn, the LAPD’s LGBTQ Training Coordinator.

“When people report crimes it helps us better allocate public safety resources to address those specific crimes—but, most importantly, it helps us link people to support services and victim assistance.”

The LAPD’s LGBTQ Working Group has helped the department foster positive relations with the local LGBTQ community for more than five years and has worked in tandem with other, similar groups within the department, such as the LGBTQ Outreach Program, led by Assistant Chief Beatrice M. Girmala.

“Our department fundamentally believes that we cannot do the work that we do without working in close collaboration with the community,” Sohn said.

[This TRT Exclusive Report was originally published on its December 6, 2018 Issue].