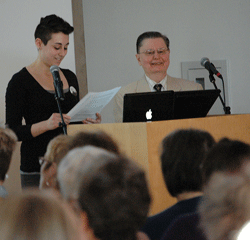 On Feb. 5, a rapt audience in the Smith College Campus Center listened to a story of an early 20th-century gender rebel who ran a Northampton restaurant popular with Smith students. The presentation was a joint effort of Elizabeth Kent, a Smith College senior, and Bet Power, executive director of the Sexual Minorities Education Foundation, Inc. (SMEF).

“When I settled the archives in Northampton in the early 1980s,” Power said, “I heard through the lesbian grapevine about a ‘cross-dressing woman’ who ran a ‘bohemian’ tea room in the early 1900s. There were hints that s/he was partnered with a woman romantically and that the tea room they ran was frequented mainly by women and Smith College students.”

The woman’s name was Anna De Naucaze, and her “bohemian tea room” was called Ye Rose Tree Inn. For many years, it was on the list of “approved” establishments that Smith students were allowed to frequent. Documents from the Smith College archives show the inn was a popular gathering spot. After a change in administration at Smith, however, the inn was removed from the “approved” list. Allegations surfaced that students were smoking and possibly drinking alcohol there, though de Naucaze vehemently denied allowing it.

As he unearthed information about the enigmatic historical figure, Power began to put together a file in the archives about de Naucaze.

“Through my initial research, I learned that Anna de Naucaze edited and published 4 ALL magazine, a publication that was widely read in Northampton,” Power said. He also discovered that Northampton’s Forbes Library has copies of all 14 issues of 4 ALL.

Then, in 2011, Kent joined in the research. Through a Praxis-funded work-study, Kent worked with Power at SMEF during the summer of 2011.

“I did not want us to make even one statement that we could not historically prove was accurate,” Power said.

Out of this historical adventure, an idea was born: “Stories of Our LGBT Ancestors,” a series of presentations about local LGBT historical figures, of which February’s event was the first. Power invited Kent to co-present about Anna de Naucaze.
“[Kent] produced a 65-page paper that includes pages of source annotations and photographs,” Power said. “When I read it, I knew that we had to educate the community about this rich history by telling the story to the public and sharing the research with them.”

Power, a transgender man, is especially fascinated by de Naucaze’s challenge to gender norms of the day.

“The courage and self-confidence of Anna de Naucaze, to dress in male attire and haircut,” Power said, “expressing hir gender identity openly, in the years s/he lived in Northampton, 1908 to 1924, all while living with and being romantically involved with a woman in such a high-profile way here in town … that’s what impressed me.”

“One thing that I found most fascinating about de Naucaze’s story was her adoption of a child with Kate Sangree in 1923,” said Kent. “I thought it was incredible that the story made front-page news in the Daily Hampshire Gazette and seemed to be largely unquestioned.”

Although they agree on many things, Kent and Power emerged from their research with some differences in perspective. Kent, for example, uses female pronouns for de Naucaze, while Power prefers to use gender neutral pronouns (e.g. “s/he,” “hir”). Kent explained that while de Naucaze might identify differently today, in her lifetime she identified as a woman and used female pronouns, as that was what was available to her in her historical context. Power uses gender-neutral pronouns in recognition of de Naucaze’s gender variance and because it is impossible to know how de Naucaze might identify today.

Speculation about de Naucaze’s gender identity stems from more than style of dress and comportment. In an essay opposing the women’s suffrage movement, de Naucaze wrote “I am on the side of the sufferers, the men.”

“I think de Naucaze’s views on women’s suffrage definitely make sense in the context of internalized sexism,” said Kent. “She could have been trying to assert her own masculinity by adhering to and supporting strict gender roles.”

Power, on the other hand, feels that the statement couldn’t reflect internalized sexism.

“I don’t think it can be ‘internalized sexism’ unless one views themselves as a woman to begin with,” Power said.  ”It seems to me that Anna de Naucaze had a male mind.”

Another possibility, Power says, is that de Naucaze felt that politics was something women should not get involved in because of moral qualms, similar to objections some raise to women in military or combat positions.

“Honestly,” Power said, “I think Anna de Naucaze is a historical example of a transsexual man living in an era when there were no words for him, no gender confirmation surgeries or HRT [hormone replacement therapy] available.”

In addition to simply wanting to share information about this historical figure, Power felt it was relevant to bring the story to the community for another reason. In the abrupt change in relations between Smith College and Ye Rose Tree Inn, Power sees hints of town-and-gown problems that continue into the present, as seen in conflict the college has had with the owners of the Green Street Café.

“I wanted to bring this story to Smith itself and to the community at large, for reflection on the past and continuing mistakes Smith College has made concerning our LGBT community, individuals, and town businesses,” said Power.

Around 140 people attended the event, bringing in over $800 for SMEF. According to Power, the funds will be used to file paperwork to obtain 501(c)3 status for the organization.

Kent’s research will be preserved in the SMEF archives, but Kent hopes to see it more widely available, as well.

“Jean Savarese from Out Books on Wheels is going to add my research paper to their collection,” Kent said, “and I’m pursuing publishing my research in an academic journal.”

“The fact that not only was Anna de Naucaze gender-nonconforming and woman-loving and was the talk of the town in hir day, but s/he achieved a position of importance and influence in the social, cultural, and political life of Northampton that was unparalleled,” Power noted. “Hir achievement with bringing not only national but international renown to Ye Rose Tree Inn — and thus benefiting our town — was remarkable. It was a success story of one of our queer ancestors who was truly different, but achieved great things here despite the odds. “

For more information about the Sexual Minorities Education Foundation, Inc. and upcoming presentations of “Stories of Our LGBT Ancestors,” visit http://www.facebook.com/pages/Sexual-Minorities-Archives.