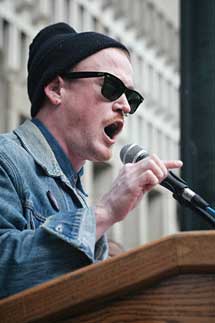 By: Keegan O’Brien and Ann Coleman*—

This St. Patrick’s Day made history in Boston, Mass. as lesbian, gay, bisexual, transgender and queer organizations were finally allowed to march in South Boston’s St. Patrick’s Day Parade, with the city’s Mayor joining them, for the first time in over two decades. Since 1993, the Allied War Veterans Council (AWVC) has banned any LGBTQ organizations from marching in the parade. The fight was taken all the way to the Supreme Court, and in 1995, the Court ruled in favor of the Council’s right to discriminate. In protest of the Council’s decisions, Boston’s Mayors and other state politicians refused to participate in the event.

In 2011, Veterans for Peace, a group of anti-war veterans, put in a request to join the march and were also informed by parade organizers that they were not allowed to participate. In response, VFP reached out to the LGBTQ community with a proposal; if we both can’t march then let’s start our own parade—and the first St. Patrick’s Day Peace and Equality Parade was born. The first march, and the four thereafter, were all a tremendous success. Hundreds of social justice activists of all different stripes came out to march through the streets of South Boston. The Peace and Equality parade was a powerful display of solidarity between movements and provided a refreshing antidote to the traditional, highly militaristic, conservative march, which includes a heavy presence of law enforcement contingents, pro military organizations, and of course, armored vehicles. [pullquote]Why should LGBTQ organizations find common cause with anti-war groups, some may ask? Because our struggles are connected.[/pullquote]

Over the past few years, pressure was starting to pay off. Parade organizers were put on the defensive, and pressure began pouring in from all sides to end their exclusionary practices against LGBTQ people. As time went on, the AWVC looked more and more out of touch with reality. When parade organizers finally announced that LGBTQ groups OutVets and Boston Pride would be allowed to march this year, they were only catching up to everyone else.

However, parade organizers weren’t welcoming everyone on board. Veterans for Peace have still been denied the right to march in this year’s parade. Given the parade’s historically conservative bend and its institutional ties to military and law enforcement, this wasn’t much of a surprise. On top of that, VFP has been caught up in a lengthy court battle with the City regarding their permit to host the alternative Peace Parade. In this context, it came as a shock to many to hear that Boston Pride would be joining this year’s St. Patrick’s Day Parade despite the fact that our sisters and brothers in Vets for Peace are still prevented from marching. Especially since just a year ago Boston Pride made this statement;

While the acceptance of LGBTQ people in South Boston’s St. Patrick’s Day Parade is a historic and significant victory that demonstrates how far we’ve come and the power of collective, grassroots organizing, Boston Pride’s decision to join the march while our sisters and brother in Veterans for Peace are—and were—still excluded is a slap in the face to any real, meaningful solidarity, especially in the context of a parade that is so riddled with militarism and jingoistic nationalism. [pullquote]Organizations have narrowed their political agendas and have become more concerned with getting a seat at the table with America’s corporate and political elite, rather than challenging them in the streets and building solidarity with other struggles. Boston Pride proved that again this year when they turned their back on Veterans for Peace. [/pullquote]

Why should LGBTQ organizations find common cause with anti-war groups, some may ask? Because our struggles are connected. The billions our government wastes on drone wars and military occupations abroad is money that is being drained from our communities at home. Every bomb dropped in the Middle East or Central Asia is money that could be spent on housing for homeless queer youth or providing already strapped schools with the resources to deal with the epidemic of queer youth bullying and suicide. Queer people are casualties of the America war machine as well; queers have been sent over seas to die or come back injured and traumatized and are included among the victims of American bombs and bullets. Far from being separate, our struggles are interconnected.

In 1970 Boston saw its first Gay Pride Parade, although it looked very different from the Pride we see today, flooded with its corporate sponsorships and diluted of any meaningful political messages, and it wasn’t a parade—it was a protest. Gay liberationists marched to demand full legal equality, sexual and gender liberation for all, and an immediate end to the Vietnam War. In the past few decades, the movement has lost its way. Organizations have narrowed their political agendas and have become more concerned with getting a seat at the table with America’s corporate and political elite, rather than challenging them in the streets and building solidarity with other struggles. Boston Pride proved that again this year when they turned their back on Veterans for Peace. Our movement would gain tremendously by going back to its radical roots based on solidarity and liberation.

*Keegan O’Brien is a queer socialist activist and writer, and a graduate student at the University of Massachusetts Boston. O’Brien is an independent columnist whose work has appeared in The Nation, Electronic Intifada, and SocialistWorker.org. He was also an organizer for the first alternative parade in 2011.

*Ann Coleman, long time anti-war activist and LGBT socialist, was an organizer for the first alternative parade in 2011.

3 Comments on "Op-Ed: Boston Pride’s Decision to March in the St. Patrick’s Day Parade is an Abandonment of Solidarity"