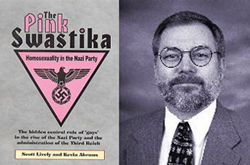 Springfield, Mass.–This morning in Springfield (Massachusetts) Federal Court, attorneys from the Center for Constitutional Rights, NYC, filed a federal lawsuit against Abiding Truth Ministries President Scott Lively. Reactions from Massachusetts and New England area leaders and community members are pouring in with regards to the unexpected lawsuit and what this could mean to organizations that continue to foster hatred toward LGBT and other groups.

The Southern Poverty Law Center recently stated that Anti-LGBT Hate Groups  are on the rise. These Anti-LGBT Hate Groups continue to utilize harassment, bigotry, intimidation, bullying, and recruit members that read their websites to directly and indirectly create an environment of fear and concern towards the LGBT community. This literature includes methods to silence its members. The Rainbow Times brings reactions of the news to you, in the order that we have and are receiving them.

“I strongly support Sexual Minorities Uganda (SMUG) in their lawsuit, although this will bring much needed visibility to experiences LGBT Ugandans face in their country, it is unfortunate that this kind of hatred, bigotry and violence is being exported from America and we should all stand with SMUG in stopping this.”

“Scott Lively and his ‘ministry’ have been advocating for the death of LGBT individuals, in this country that might be called attempted murder which is ‘acting deliberately and intentionally or recklessly with extreme disregard for human life’ and so yes he should be on trial.”

“Boston Pride supports any effort that will help prevent gay people anywhere – from Massachusetts to Uganda – from being harmed or killed because of their orientation. No one’s faith should be used to justify acts of hate, which is what the proposed law in Uganda would do.  With today’s action, we are reminded why it is important for Pride organizations worldwide to continue to do the work we do.”

“Scott Lively can claim that he has not harmed anyone by speaking out against LGBT people in Uganda, but that does not make it true. In 2009, he traveled to Uganda and preached about the harm that gay people purportedly cause to society. After Lively’s public appearance in Uganda, the Ugandan parliament proposed a bill listing out punishments for acts of homosexuality, including the death penalty. That bill never passed, but the parliament recently introduced another bill that would do the same. The most recent Human Rights Report on Uganda from the State Department notes that Uganda is known for engaging in ‘serious human rights abuses’ which include acts of ‘violence and discrimination’ against LGBT people. To travel to such a country and publicly describe LGBT people as vessels of sin is to incite grave violence against them. This is dramatically out of step with the values of our Commonwealth and a shameful disgrace to our country. Words and actions matter, and Lively should be held accountable for his.”

“Scott Lively must be held accountable for his actions and a legal suit against this evil homophobe is long overdue.  Just as with Fred Phelps and the Westboro Baptists, Lively’s HATE speech is NOT Free Speech and must no longer be tolerated.  This monster must be held accountable for inciting his rabid followers to kill innocent people.  And he, himself, is just as complicit in murderous activity.  The blood of David Kato Kisule and countless others  will forever stain Scott Lively,  just as if he struck each and every  hate-filled murderous blow  with his own hand.  I fully support and commend Frank Mugisha and SMUG for their courage and fortitude in seeking retribution for the untold murders and anguish that Lively’s hatred and lies have caused.”