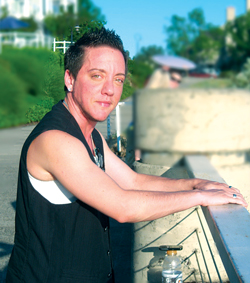 Some transgender people transition quietly, some transition in a grand way but keep some personal details to themselves and yet others transition and tell their stories in hopes of educating, inspiring and supporting the LGBTQ community. That is the case of a young man who has been reaching out across the country, from Seattle to Florida to New England, to give one voice to the, as he said, “often times silent T within the LGBTQ acronym.”

Beck Lewis, 33, is a transgender male whom, after struggling with his identity for years, discovered the transgender community on YouTube, where he would watch videos of FtMs (Female-to-Male) share their transition stories and relay how happy they were since beginning their transition. At first, Lewis said, he did not understand what that meant, what transitioning was. After educating himself, he realized that he, too, could be happy. Lewis stated that he then could “use the proper terminology that confirmed” his “identity,” and “transition from one gender to another.”

From the beginning stages of his transition, Lewis realized that there was an entire community of transgender individuals like himself that wanted to interact and learn from one another. Lewis has built upon this found community by creating a Facebook group and YouTube channel to document his transition and reach out to others, “I love the T community, as most of those in it have helped me out so much … the love and dedication that most within the community display toward one another is amazing.” His YouTube videos garner thousands of hits, and so he is able to reach out in the same way that helped him at the start.

“As for right now … I feel blessed and am experiencing pure bliss. I am currently living my life openly and freely. I feel like I do not need to hide who I am anymore,” explained Lewis, who wants to give back some of this happiness to others who are less fortunate.

Each month, Lewis orchestrates contests for pre-op transgender men. He has partnered up with FTM Underworks, an online store, to provide new binder compression shirts to the winner of these contests. This program, named “Binder Boys,” is especially great for those who may not be able to afford a binder.

“It makes me feel good to give back to the community by providing this opportunity, and together my Binder Boys program and FTM Underworks are helping one transman at a time,” Lewis added.

By running this program, as well as his YouTube channel, Lewis hopes to educate others on transgender life and community.
Eventually, Lewis plans on becoming an LMHC or LCSW and would like to be able to provide hormone replacement therapy letters (psychological recommendations) for transgender men and women. But for now, Lewis advocates to inspire others to be a voice and to instill bravery in them. This is his story’s worth.

“If we, as one body, pull together, no one has to feel like the minority,” said Lewis. “The world we live in can be a much better place if we reach out to the closed-minded in a way they might pay attention, if communities held more seminars, if schools from all over the country would educate on more than just sex education, if you held a food drive, if you volunteered, if you stuck up for someone else, etc. When I said ‘it gets better,’ I meant it can and will for any community, LGBTQ and those outside of it. We can do big things in numbers, and I am just one person who strives to do my part in an effort to accomplish great things.”

According to Lewis, readers can help within their own community in many ways.”Readers can spread the word about Binder Boys and find their nearest LGBTQ center and inquire as to the needs of the center to see how they might be able to get more involved,” he said. “I think more discussion groups on social networks would be a great place to start, so that there is always a place where people can confide in others, make friends and obtain the resources they need.”

For more information about Beck Lewis and the Binder Boys program, visit www.facebook.com/binderboys and watch his YouTube channel at www.youtube.com/user/BeckRosatoLewis.