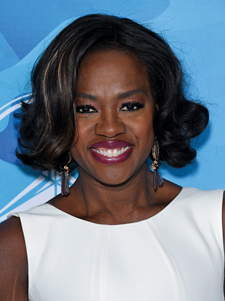 Viola Davis, star of "How To Get Away With Murder"

Denzel Washington is directing the film adaptation of the late August Wilson’s 1985 play, Fences. This makes sense, as the 2010 Broadway revival starring Washington and Viola Davis earned the pair Tony Awards. Washington—and probably Davis, too—will also star in the film, which concerns race relations examined in the context of one black man’s dream deferred: He wanted a career in baseball and wound up collecting trash. Wilson’s work is more than ripe for the screen, and now his original, not-quite-finished screenplay draft is getting the Tony Kushner treatment. The Tony-winning playwright wrote Angels in America and is working closely with Washington on the final product, which means it has prestige picture written all over it. And true to the subject matter, there’s been some criticism over Kushner’s inclusion (he is white, and Wilson was often critical of white directors and writers taking “custody” of black stories), but when you’re chosen by Denzel Washington you tend not to refuse. Expect more conversation on this subject as the project rolls toward completion.

Famed writer Djuna Barnes’s 1928 novel Ladies Almanack told the true-to-life-yet-thinly-veiled story of a lesbian circle of writers and artists in Jazz Age Paris. Its characters were stand-ins for Barnes’ woman-centered world, including her lover Natalie Barney, and writers like Radclyffe Hall. It’s a vital piece of history from nearly 100 years ago, but its relevance remains timeless. So it’s welcome news that filmmaker Daviel Shy is working on an independent film version. Shot in Chicago and Paris on a shoestring budget, with tons of community effort behind it, Almanack the movie boasts familiar names like Guinevere Turner and Eileen Myles alongside non-actors, and expands its narrative reach to include historical figures like Colette and Gertrude Stein. It’s a tough film distribution world out there for aesthetically adventurous lesbian dramas with this much ambition, which makes the project feel all the more vital. In post-production now, prepping for the film festival circuit, keep your eyes open for this one when it finally comes around.

“Hello, lover,” said Carrie Bradshaw, famously, to a pink, feathery pair of what were probably Manolo Blahnik shoes. And if they weren’t they should have been. More than any other pop culture branding device, Sex and the City raised the profile of Blahniks’ sky-high heels, well, sky-high. And though Louboutin has stolen a bit of the maker’s thunder in recent years, that isn’t stopping filmmaker Michael Roberts from working on a much-needed documentary on the legendary designer. Its awesome title is Manolo (The Boy Who Made Shoes for Lizards), and it will feature some of the biggest names in fashion and entertainment to sing the man’s praises, from Anna Wintour, Andre Leon Talley, Paloma Picasso, Iman, Rihanno, Naomi Campbell, and Isaac Mizrahi, to, yes, Sex creator Candace Bushnell. When it’s ready you’ll want to walk, not run, to see it, lest you break a heel.

You miss America’s Next Top Model. You know you do. So what do you do to console yourself besides watching endless runway shows on Apple TV’s M2M channel? You chant and pray for Model Wars to make it past the pilot stage, that’s what. Now, normally, pilots are not all that newsworthy. You may, in fact, never see them, since they can be killed in the quiet confines of a TV development executive’s office. But sometimes that pilot goes to series. And just from a conceptual standpoint we want this one to make it. It’s from Reality Bites screenwriter Helen Childress and based on Robert Lacey’s book Model Woman: Eileen Ford and The Business of Beauty. Ford began as a model, then founded the Ford modeling agency, and this nighttime soap would be set in a world very much like the one she built. In the late 1970s. Let that float around your fashion-brain for a moment: Jerry Hall, Lauren Hutton, Studio 54, Andy Warhol, severe outfits, Bianca Jagger, Eyes of Laura Mars, everything that was great about that era and none of the horrible Reagan aftermath. It has the potential to be a very shiny, glamorous Mad (Wo)Men. And we need that now. More than ever.

*Romeo San Vicente shakes his little tush on the catwalk. He can be reached care of this publication or at DeepInsideHollywood@qsyndicate.com.