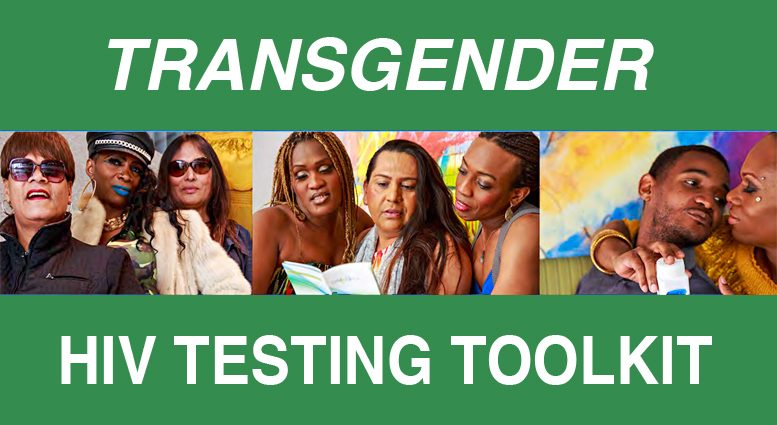 On Monday, April 18, the inaugural National Transgender HIV Testing Day (NTHTD) was observed in the United States. Sponsored by the Center of Excellence for Transgender Health at the University of California-San Francisco, the day focused on increasing HIV testing, prevention, and treatment among transgender people―who are disproportionately affected by HIV. One recent study indicated that about one in five (22%) U.S. transgender women living are living with HIV. Another analysis estimated that more than half (56%) of African American transgender women are HIV+.

“Because transgender people, especially transgender women, are at high risk for acquiring HIV, there is an urgent need to expand HIV testing—the critical first step along the continuum of care—and prevention and treatment initiatives to reach the transgender community,” noted Jonathan Mermin, director of CDC’s National Center for HIV/AIDS, Viral Hepatitis, STD, and TB Prevention. “CDC and other organizations are accelerating the implementation of high-impact HIV prevention strategies for the transgender community.”

In conjunction with NTHTD, the Center of Excellence for Transgender Health has released its new Trans HIV Testing Toolkit, which is designed to support local efforts to increase knowledge of HIV status and help educate health care providers on the testing needs of the transgender community. The 98-page document includes the following educational modules:

In related news, the federal blog.AIDS.gov site published two blog posts focusing on health in the transgender community this month: New Federal Actions to Address HIV in the Transgender Community, by Richard Wolitski, acting director of the HHS Office of HIV/AIDS and Infectious Disease Policy, and colleagues; and The White House: Our Commitment to Improving Outcomes in the Transgender Community, by Amy Lansky, acting director of the White House Office of National AIDS Policy.

The Transgender Law Center (TLC) has recently published its first report of findings from the Positively Trans (T+) survey, a community-led project focusing on the lives and experiences of transgender people in the U.S. living with HIV. TLC conducted the T+ online survey and needs assessment during the summer of 2015 to identify the needs and advocacy priorities of HIV+ transgender persons. More than 400 people responded to at least part to the survey, with complete responses coming from 157 respondents. The analysis included in the report focuses on data from persons who completed the full survey. Of this group, the majority were female-identified U.S. citizens making less than $23,000 per year―and nearly half earned less than $12,000 per year. More than 40% were currently living in the South. More than two-fifths (41%) of the T+ survey respondents reported some history of incarceration; among those who had been incarcerated, more than half had gone at least 6 months without medical care since their diagnosis.

The T+ survey also asked respondents about their top health and legal concerns, the barriers to their health and well-being, and their experience with discrimination and denial of healthcare related to their gender identity or HIV status.

The respondents’ top five health priorities were: 1) gender affirming and non-discriminatory health care; 2) hormone therapy and side effects; 3) mental health care, including trauma recovery; 4) personal care, including nutrition and healthy living; and 5) antiretroviral therapy and side effects. Their top five legal concerns were: 1) HIV-related discrimination; 2) employment discrimination; 3) discrimination in public accommodations; 4) identification documents; and 5) housing discrimination. In conjunction with the report, TLC has posted a series of videos on the life experiences of transgender people living with and affected by HIV. The first five videos focus on Black transgender women living in the South.

The APA resolution also recommends that “laws that criminalize behaviors posing low or negligible risk for HIV transmission should be repealed or reformed and better aligned with contemporary scientific evidence regarding HIV transmission probabilities for specific behaviors and the efficacy of risk-reduction activities.” The APA resolution follows similar recommendations by the U.S. Department of Justice, CDC, National Alliance of State and Territorial AIDS Directors, HIV Medicine Association, Positive Justice Project, and a range of other government, professional, and advocacy groups.

In a recent post on blog.AIDS.gov, Amy Lansky, acting director of the Office of National AIDS Policy (ONAP), summarized key findings and discussion points from the March White House Meeting on HIV Stigma: Research for a Robust Response, cohosted by ONAP and the National Institutes of Health. In her post, Lansky notes that, “As we approach the 35th anniversary of the first case reports of what would later come to be known as HIV/AIDS, we can rightfully celebrate that we now have an array of effective tools to prevent new infections, diagnose them, and care for people living with HIV. Yet the great effectiveness of these tools is too often blunted due to persistent HIV-related stigma and discrimination. We know from studies as well as countless personal stories that HIV-related stigma inhibits far too many people from accessing HIV prevention, testing, and care, even today. Clearly, in order to end the epidemic, we must combat stigma and discrimination.”

The HIV prevention advocacy group AVAC has developed a new section of its PrEP Watch clearinghouse that focuses on ongoing and planned initiatives to roll out and increase access to HIV pre-exposure prophylaxis (PrEP) at various sites worldwide. Their Implementation Initiatives page currently includes information about PrEP demonstration and introduction efforts in sub-Saharan Africa, including five projects supported by the U.S. Agency for International Development and the DREAMS Initiative, a partnership to reduce new HIV infections among adolescent girls and young women in 10 countries. The PrEP Watch site also includes detailed summaries of research and demonstration projects and PrEP roll-out activities in specific countries, including Kenya, South Africa and Zimbabwe. AVAC plans to compile additional country summaries as PrEP is evaluated and implemented out in other nations.

National Asian and Pacific Islander HIV/AIDS Awareness Day. AIDS.gov web page with links to information and resources about HIV/AIDS in this community.

HIV Infections Among Asians in the United States. CDC fact sheet with recent HIV/AIDS statistics, plus information on risk factors and barriers to prevention among Asians living in the U.S. and dependent areas, and steps CDC is taking to address HIV/AIDS in this population group.

Diagnoses of HIV Infection and AIDS in the United States and Dependent Areas, 2014. This CDC report includes information about HIV and AIDS cases among Asian and Pacific Islanders and five other racial/ethnic groups.

Epidemiology of HIV Infection Through 2014. This CDC slide set includes numerous tables, charts, and graphs with recent and historical information on HIV and AIDS diagnoses, including breakdowns by race/ethnicity, mode of exposure, gender, age, and state or territory.

HIV Surveillance by Race/Ethnicity Through 2014. This CDC slide set focuses specifically on racial and ethnic patterns and disparities in seven racial/ethnic groups, including Asian Americans and Native Hawaiians and Other Pacific Islanders.

BESAFE: A Cultural Competency Model for Asians and Pacific Islanders. This 96-page workbook was produced by the National Minority AIDS Education and Training Center and Howard University.