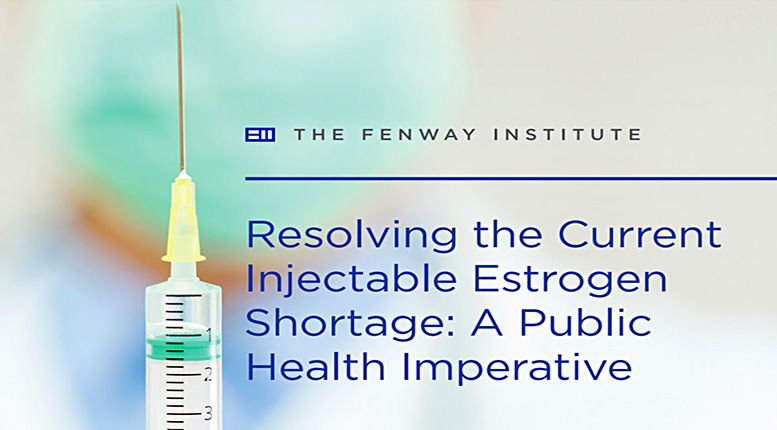 The U.S. Food and Drug Administration (FDA), which regulates injectable hormones and other medications, could—and should—be playing an active role in ending this medication shortage. The FDA maintains a public list of medications for which there are supply shortages. But it only provides a broad explanation of the reason for the shortage along with an estimated release date by which the drug will be available. Patients and providers are not given any information regarding what is required in order for the shortage to be resolved, and reported release dates are frequently missed without explanation. With regard to the injectable estrogen shortage, the release date has been pushed back nearly every month for the past several months. Meanwhile, it’s not clear from the FDA drug shortage list if the supply is being constricted by the pharmaceutical company, by the FDA, or due to another reason altogether.

Recently, The Fenway Institute, Callen-Lorde Community Health Center, and the Treatment Action Group co-published an issue brief on this topic titled Resolving the current injectable estrogen shortage: A public health imperative. Staff from these three organizations were in touch with Par Pharmaceutical, a maker of injectable estrogen, to ask why the drug was not available. Par Pharmaceutical President Paul Campanelli answered that a new raw material in Delestrogen, the company’s brand name for injectable estrogen, requires FDA approval. He estimated that the approval would be granted by early 2017.

Hopefully Campanelli is correct and injectable estrogen will be back on the market soon. But the lack of transparency surrounding the drug shortage has made it even more difficult for transgender individuals to access quality health care. The FDA should not merely reiterate vague, manufacturer-provided information regarding medication shortages and delays. Instead, the FDA should be more proactive in seeking information from manufacturers in order to keep the public informed, and should also provide relevant information related to a drug shortage. The need to approve a new ingredient in a pharmaceutical would surely count as relevant information.

Meanwhile, transgender men and women also suffer from a lack of evidence-based practice regarding hormone therapy for gender affirmation. Health care providers, working closely with transgender women and advocates, have created feminizing hormone therapy treatments that result in the development of female secondary sex characteristics, such as breasts, while suppressing male secondary sex characteristics, such as muscle mass. Estrogen prescribed for feminizing therapy is commonly delivered through a patch, oral or sublingual tablet, or injection. However, no studies have compared the benefits or risks of varying estrogen delivery methods for transgender women. By contrast, there are over 17 estrogen medications with approved FDA labels for cisgender menopausal women. The FDA could―and should―use existing regulatory frameworks to incentivize this research among manufacturers.

We encourage transgender health activists to submit public comment to the FDA on the issue by January 9, 2017. Comments can address the FDA’s role in agency-regulated approval of hormones for gender affirmation, and the FDA’s level of transparency around drug shortages. The public is also encouraged to contact the National Institute of Minority Health and Health Disparities (NIMHD) and urge the agency to develop clinical research priorities that strengthen the evidence base needed for clear regulatory guidance and transgender health best practices.

Sophia Geffen is a health policy researcher for The Fenway Institute of Fenway Health. She is also the co-author of the recently published policy brief, “Resolving the current injectable estrogen shortage: A public health imperative.”