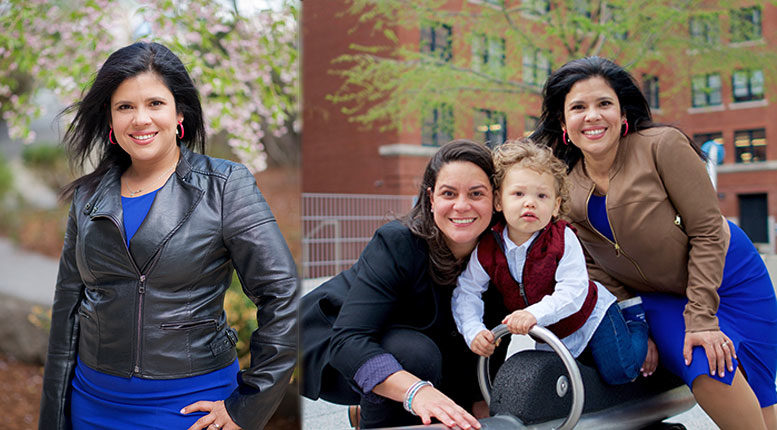 Alejandra St. Guillen could make history in Boston as the 1st Latinx gay woman to be elected for City Council

BOSTON—If there is something that the mid-term elections have taught Americans is that the political arena is shifting because voters are more interested in people who bring them results, not just promises, who share similar backgrounds and intersectionalities. Those elections resulted in the highest number of LGBT people ever holding public office, including women and people of color—from various races, ethnicities, sexual orientations, and gender identities. In Boston, Alejandra St. Guillen, isn’t just another candidate. If elected, she will make history as the first Latinx woman to take a seat on the Boston City Council.

Not only is she a Latina, but she meets at the intersections of many marginalized struggles and identities, which places her in a position to understand and reach more people than the average person.

“I believe the intersectionality of all my identities as a gay woman, a Latina, the daughter of an immigrant, a homicide survivor, a new mom, etc. have had a tremendous impact on my life and my passions,” said St. Guillen, Boston City Councilor At-Large candidate, to The Rainbow Times. “My passion is driven by my deeply held belief that all people have the right and should have the opportunity to reach their full potential. Everyone deserves to live with dignity and respect and that is played out across various spectrums—in our schools, in the community, in our local government.”

Born to a Venezuelan immigrant father and her mother from New Hampshire, St. Guillen had to face major heartbreak before understanding that her calling for service to others went beyond the civic work that she’d learned from her father—a man who offered assistance to youth afflicted with “drug addiction and abuse.” For her family, she told The Wesleyan Argus (TWA) in January 2019, “helping others was always important.”

But helping others become more of a call for St. Guillen after she faced one of the most devastating events in her life.

The brutal murder of her only sister, Imette St. Guillen, left the openly-gay candidate feeling as if she had failed her eldest child duties because she couldn’t protect her younger sibling, she explained to the Boston Globe in March of this year. Weeks before obtaining her Masters’ degree in 2006, Imette was brutally murdered in NYC by a club bouncer, according to the Globe’s story. Losing her, in a sense, cemented St. Guillen’s determination and calling to serve others.

Her sister was someone that St. Guillen was close to and whom she confided in, so much so that her first “coming out” was to Imette and not her parents.

“When I told my sister, she was not shocked at all. She was super excited and insisted we tell my mother right away,” she said.

St. Guillen attended esteemed public schools in Boston and then went to college and graduated with a double major in economics and African American Studies from Wesleyan University, which continued to prepare the young woman for a deeper understanding of how socioeconomics and race could affect services and opportunities for non-majority children, youth and adults.

“My varied life experiences mean I see the world through a lens of empathy and hope and a belief that we all have the ability to do more and give more every day,” she explained.

Life milestones like graduating from college, purchasing a new house, marrying her wife and the birth of her child, are no ordinary feats for St. Guillen, who’s also had to face obstacles inherent to the intersectionalities of her various identities since her humble upbringing.

“I have suffered great loss and heartache in my life and have also dealt with depression since a very early age,” she said. “Therefore, these personal accomplishments may seem quite ordinary to other people, but they are extraordinary for me, as they demonstrate my tenacity and resiliency in the face of remarkable odds.”

In her most recent capacity—after having worked in special education at McKinley Schools, non-profit work with immigrant children and communities via ¿Oíste?, as Director of Constituent Services for Senator Dianne Wilkerson’s office, and later under Mayor Marty J. Walsh’s Office for Immigrant Advancement—St. Guillen is uniquely prepared to handle the work that may await her, if elected, right from the start.

“As someone who has worked both inside and outside of government advocating for the communities struggling to create a home and a community in Boston, I am uniquely positioned to hit the ground running on day one,” said the candidate.

Aware that being a gay woman comes with its own set of tribulations, St. Guillen decidedly pointed out that she will be working to ensure that LGBTQ youth are less bullied by peers and that more LGBTQ appropriate education is available to all students.

“I am extremely passionate about issues impacting LGBTQ youth. In particular, I am very concerned about bullying,” she said. “Even in a state and city as progressive as ours when it comes to LGBTQ rights, LGBTQ youth are still at an increased risk of being bullied by their peers. I am also passionate about making sure our sex education in schools is culturally competent and LGBTQ appropriate. We know that 25 percent of all new HIV infections are among young people ages 13-24. We need to do a better job at educating our young people and providing them the tools to make safe choices.”

A 2016 Behavioral Risk Factor Surveillance System Survey by the Department of Public Health reported that there are 5,474,136 adults in Mass., and approximately 394,000 are LGBT (an underestimation of the true size of our LGBT population). Those statistics, along with a sense of duty, are behind St. Guillen’s team who is strategically working on the release of her policy for this segment of her would-be constituents.

“The LGBTQ population is a key priority for me,” she stated. “We are planning the release of our LGBTQ focused policy platform on June 1 to coincide with Pride month. … Therefore, if elected I would work with BPS to implement programs that emphasize safe spaces and inclusivity in schools to reduce absenteeism, depression, and harassment. There, we will cover policy proposals on everything from bullying to comprehensive sexual education to housing for our LGBTQ elders.”

Estimates from the Department of Health in 2015 state that 2 percent of Mass. High School students identified as transgender. St. Guillen said she supported Massachusetts Yes On 3, a measure to uphold protections in public accommodations for the transgender community in the commonwealth. Likewise, she opposes the trans military ban since “both issues are about doing what is right and in the best interest of humanity.”

“I proudly voted Yes on 3 and was very proud that my fellow residents did the same,” she said. “The rights of transgender people are basic human rights. The trans military ban has nothing to do with cost or national security and everything to do with bigotry and playing to a political base.”

And, she won’t stand for anything less when it comes to the LGBTQ community, she explained.

“As a gay woman [married for 8 years], I am personally connected to the issues impacting the LGBTQ community,” she said. “I know that those experiences are shaped not only by one’s sexual [orientation] or gender identity but the myriad of one’s experiences, whether it be as a person of color, a young person experiencing homelessness or an elder who no longer feels comfortable being ‘out.’”

Just as she’s done throughout her life, St. Guillen is determined to continue to be “out and proud,” especially during this stage in her life as she now runs for Boston City Council.

“As a very public official who has been out for her entire career, I believe I have been able to be a role model for young activists to bring their full selves to the struggle,” she explained.

Her message for this community is that, if elected, “you will always have an advocate on the Council, someone there to make sure your needs and concerns are being heard and someone who will also stand up for equity and justice.”

But, her determination, as her intersectionalities, include more than just members of the LGBTQ community. According to St. Guillen, the “Trump administration’s xenophobic rhetoric and policies” continue to make it harder for all women and families “to access basic sexual and reproductive health care.”

“Even in a state like Massachusetts, people with undocumented or indeterminate status, are increasingly reluctant to access health care and other crucial services for fear of being detained or deported and separated from their families,” she stated. “This is why I would work in collaboration with organizations like Planned Parenthood to identify culturally competent sexual health initiatives.”

And, for years, the Latinx community has faced an epidemic of teen pregnancies that has hurt not only the young moms but also their families, who often lack the resources to care for another child. Education is key to lowering these rates, mentioned St. Guillen, who argued that sex education would help other communities too.

“Latinx communities are twice as likely to be affected by STI outbreaks, and Latinas have the highest teen pregnancy rate of any group,” the outspoken candidate explained. “As the first Latina elected to the Boston City Council, I would be a fierce advocate in addressing those disparities. Additionally, I would work to ensure that our LGBT and gender-nonconforming students have access to sexual health resources that work for their identity.”

The candidate compromises nothing as it pertains to abortion rights. Her stance on Alabama’s near-total abortion ban law passed nearly 3 weeks ago, was a devastating blow to women’s reproductive rights.

“We need to expand abortion access in Massachusetts and remove any restrictions, including parental consent, judicial bypass requirements, and late-term abortion restrictions, in order to ensure that we are truly a pro-choice state and we respect women to have autonomy over their own bodies and the decisions they make in how to live their lives,” she said.

As this year marks the 50th Anniversary of Stonewall and Massachusetts’ 15-year Anniversary of the passage of marriage equality in the Commonwealth, St. Guillen remembers how “incredibly meaningful the decision was” for so many in the state.

“At Pride that year, there was a couple in their 80s who were riding in a car with a sign that read ‘together for 50 years, married for 5 months’ (or some iteration of this quote) and I think about that couple all the time—what they had faced, how hard they had to fight just to be together—and I am grateful to them and grateful to Massachusetts for making their story possible and paving the way for marriage equality across the nation,” she shared with pride in what her state has accomplished for same-sex couples.

Yet, even now, years after Imette’s passing, St. Guillen pays homage—through this candidacy—to her late sister.

The words she chose to describe herself through the interview, “persistent, caring and authentic” cannot be taken lightly as the mom, wife and service-dedicated candidate ultimately explained why she is running for office.

“It was one of the greatest honors of my life to be her sister and it is in her honor and memory, and that of my father as well, that I have launched this campaign,” she said.