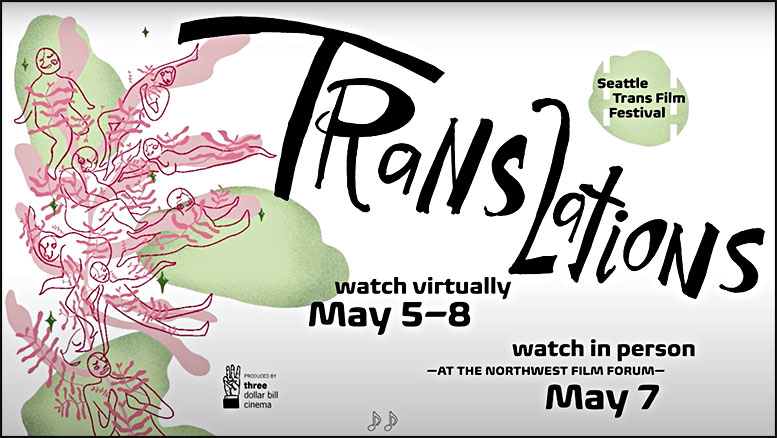 TRANSlations is available to screen anywhere in the US; Three Dollar Bill Cinema Puts; Need for trans representation on screen more important than ever

SEATTLE—Three Dollar Bill Cinema recently announced the lineup for TRANSlations: Seattle Trans Film Festival. One of two transgender film festivals in the US and one of a few in the whole world. TRANSlations returns for its 17th year in hybrid format, both online and in-person.

This year’s festival will showcase over 56 multigenerational stories from 11 countries, including Panama, Mexico, South Africa, Spain, Turkey, and Ireland

“TRANSlations is our favorite time of the year; a chance to bring together under-represented members of our community and focus on them for an entire weekend of thoughtful and impactful programming,” said Billy Ray Brewton, Managing Director of Three Dollar Bill Cinema. “And that representation is more important now than ever with queer rights under constant assault from backward-thinking entities and individuals.”

According to the ACLU, a record 238 bills that would limit the rights of LGBTQ+ Americans this year — about 65% of them specifically targeting transgender, non-binary, and gender-diverse people — have been proposed by lawmakers, an increase from 41 bills in 2018 to 238 in less than three months of 2022.

“This year, approximately 25 states in the US face harmful legislation targeting trans people with a large focus on trans athletes and trans youth,” said StormMiguel Florez, Lead Programmer. “This constant bombardment of legislating against our very existence is physically and mentally harmful, so I am thrilled that all of our TRANSlations’ shorts programs and most of our features are available to watch in all US states and territories. It is integral that we see ourselves and those who share our joys and struggles reflected on screen and behind the camera. I hope our audiences feel emboldened and connected through the power of trans and non-binary cinema.”

Official Sundance Film Festival selection, FRAMING AGNES, will screen in-person (and virtually). The film depicts and reframes the story of Agnes, the pioneering transgender woman who participated in gender health research at UCLA in the 1960s. Director Chase Joynt (NO ORDINARY MAN) brings together an all-star cast of transgender artists, including Angelica Ross (POSE), Jen Richards (DISCLOSURE, CLARICE), Zackary Drucker (TRANSPARENT), and Silas Howard (TALES OF THE CITY, BY HOOK OR BY CROOK) to breathe personality and history into gender research subjects long-hidden from the public eye.

Additional highlights include CAER, the experimental documentary tribute to the work and legacy of Lorena Borjas, diverse short film programs, and an anniversary screening of the multi-award-winning landmark trans masculine buddy film, BY HOOK OR BY CROOK.

The festival takes place from May 5-8. All films are available to screen virtually starting on May 5. Start any film between May 5 and 8, and audiences have until May 13 to view the film program. Saturday, May 7, is the in-person screening day at NW Film Forum.

BY HOOK OR BY CROOK

A best of the fest compilation of short films.

Some sweet, some bitter, but all will make you feel and leave a mark on your heart that will never fade.

Mix an ounce of puppetry, a dash of sorcery, two cups of mythological baby, six grams of Minnie Mouse, a whisper of archival footage, one vial of testosterone, and a capful of the subconscious.

Celebrate trans joy in all its forms with these short films about dance and movement, daily gender-affirming practices, and breaking barriers in sports.

These chilling short films will turn up the heat just enough to put your heart in a frenzy.

Bring your kids to watch this fun online program of trans youth who know who they are and trans, non-binary, and gender non-conforming kids, parents, and families in these live-action, documentary, and animated shorts.

Turn off the Hallmark Channel and delve into the beauty of trans romance, heartbreak, and deep, deep love.

Poetic and tender portrayals of transgender people telling their stories.

Experience all of the BIPOC shorts at the festival, all in one place.

Put your brains to the test as we close out TRANSlations 2022 with our wacky and wild take on a Game Night, featuring a host of titles from Jackbox Games.

A special screening of the EERIE ECSTASY shorts program plus a virtual watch party.

Pair up for a fun, engaging seven-minute conversation with someone new.

Join ‘The Duchess’ Ava Davis Friday, Saturday, and Sunday mornings to ‘spill the festival tea’ and discuss films and current events, plus a surprise guest or two.

THIS ENDS AT PROM

A live recording of this podcast that analyzes the staying power of womanhood featured in coming-of-age and teen girl movies. The 2019 teen comedy, Alice Junior, will be discussed.

TRANSlations showcases films by, for, and about trans, non-binary, and gender non-conforming people. Launched in 2006, TRANSlations is one of only nine trans-focused film festivals globally, providing an innovative space for creating and connecting under-represented and marginalized identities. A vital community space, this hybrid festival unites audiences and filmmakers from around the globe. Through virtual and in-person screenings, parties, panels, workshops, and community meet-ups, TRANSlations invests in relationships that build bridges and advocate for a more equitable future. For more information, visit threedollarbillcinema.org/translations-2022.