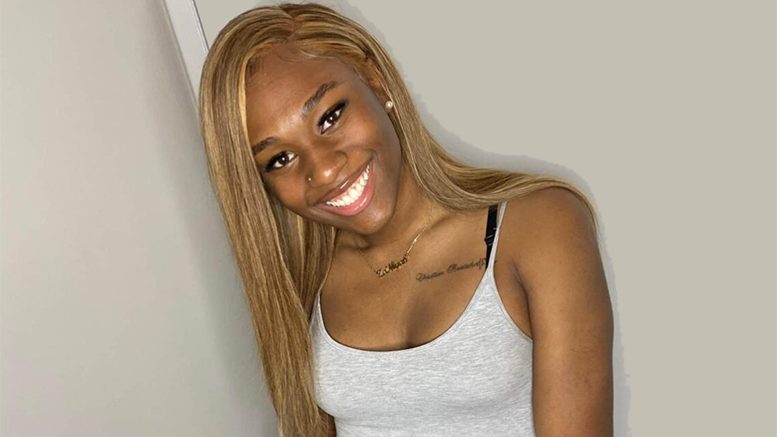 The National Black Justice Coalition, the HRC, Friends, and Family Mourn the Death of Za’niyah Williams, A Black Trans  Woman Killed in a Hit-And-Run Car Crash in Houston Texas

HOUSTON, Texas—Za’niyah Williams sounded like a typical young woman who had tried to have others accept her for who she was, a proud black trans woman, according to her FB Page.

The 21-year-old, according to Trans Griot, “was found dead on Dec. 20, 2021, after a hit and run car crash in Houston, Texas.” Za’niyah’s death is, according to the best estimates by the trans blog, “the 52nd violent killing of a transgender or gender-diverse person in 2021.” Numbers often do not match across platforms because many transgender victims are often misgendered and/or go unidentified by family.

On Dec. 19, 2021, a day prior to her death, Za’niyah reposted a message from Raven Symoné, someone she knew online, about 2021 being the last year that she was going to dwell on others not accepting her for who she was, something that most transgender people also struggle with throughout their lives. 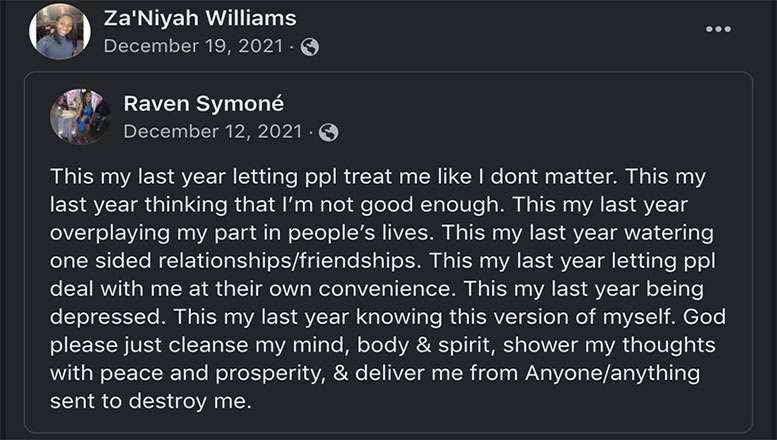 FP Post by Za’niyah Williams, a black trans woman who was another trans casualty in 2021.

Mourning the loss of Za’niyah, the National Black Justice Coalition (NBJC) reacted to the news.

She was unidentified and misgendered by police and media outlets before her loved ones were able to identify her. Loved ones describe Za’niyah as “a very sweet and smart young lady” who “always ripped the runway when she dressed up.” She was an aspiring lawyer who would have started college this month and was preparing to celebrate her birthday in Miami.

“I am saddened to hear about the loss of another sister in 2021,” said Victoria Kirby York, Deputy Executive Director. “It is devastating to see the number of people we lost last year increase especially since it was already the deadliest year on record for the transgender, nonbinary, and gender-nonconforming community. We must ensure this year is not a repeat of last and that work is actually done to end this epidemic of violence and protect the trans community. Too many of our siblings have been murdered only for the police to do nothing. That is why NBJC calls on the Harris County Sheriff’s Office to thoroughly and properly investigate the death of Za’niyah Williams and ensure those responsible are held accountable. We will check back on the progress of this investigation in a few months to ensure it is moving forward.”

Fifty-three (53) transgender, nonbinary, or gender-nonconforming people were killed in 2021. A majority of those killed were Black trans women like Za’niyah. In 2021, the Human Rights Campaign (HRC) officially documented 2021 as the year with the largest number of fatal trans-violence incidents since they began tracking such violence in 2013.

To ensure proper handling of transgender deaths, the HRC has ensured that media and police departments have tools at their disposal to report on transgender murders and accidents.

“In an injustice compounding this tragedy, Williams was misgendered in some media and police reports,” read HRC’s report on Za’niyah. “Anti-transgender stigma is exacerbated by callous or disrespectful treatment by some in the media, law enforcement, and elected offices. … it is estimated that approximately three-quarters of all known victims were misgendered by the media and/or by law enforcement.

“In the pursuit of greater accuracy and respect, HRC offers guidelines for journalists and others who report on transgender people. HRC, Media Matters, and the Trans Journalists Association have also partnered on an FAQ for reporters writing about anti-trans violence.”

Texas, at the state level, does not explicitly protect transgender and gender-diverse people from discrimination in employment, housing, education, and public spaces. Although Texas includes sexual orientation as a protected characteristic in its hate crimes law, it does not expressly include gender identity, according to the HRC.

The Harris County Sheriff’s Office asks that anyone with information on the death of Za’niyah Williams call 713-221-6000 and reference case number 2112-07879.

The NBJC Stolen Lives list of trans and non-binary individuals lost to violence and hate can be found here.

[From Excerpts From Various Reports and Press Releases]