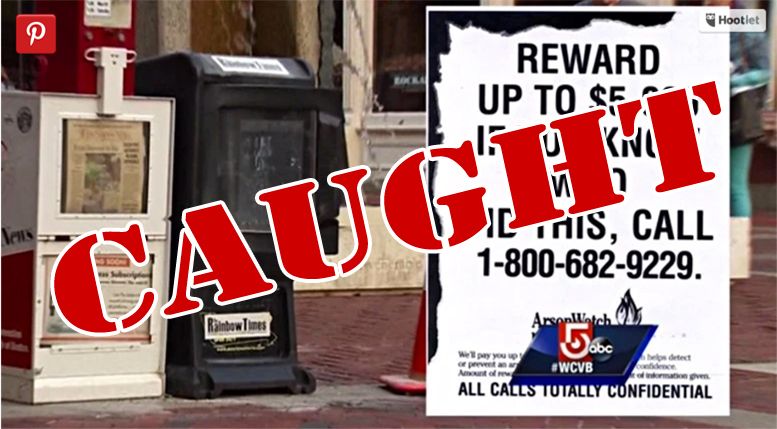 The Rainbow Times explosion perps caught and reactions to it; watch the nightly news for more information

SALEM, Mass.—Two individuals were charged with the explosion of an LGBT newspaper box in downtown Salem, Mass. according to reports from the Salem Police Department.

On Aug. 23 at approximately 1:20 a.m., Salem police video surveillance cameras showed a group of seven people put an unknown device into a Rainbow Times newspaper box and run before an explosion “rocked the downtown area,” according to police.

The Police released the following statement regarding the perpetrators:

“On August 23rd detectives from the Salem Police Department were assigned to follow up an investigation in which a Rainbow Times newspaper box, located in the center of town, was destroyed by an explosive device.

As a result of this investigation, Detective Kevin St. Pierre has filed criminal complaints against two individuals from New Hampshire.

Arraignment is scheduled for 9 a.m.

The Salem Police would like to thank the community for its assistance and tremendous support in aiding this investigation.”

Statement from The Rainbow Times on capture of assailants

“We are grateful to know that the individuals responsible for the reckless explosion of The Rainbow Times newspaper box will be held accountable and brought to justice for such a malicious and cowardly act against our community,” saidG raysen M. Ocasio, Publisher, TRT. “The two men were charged with federal crimes and although the Police was not able to find tangible evidence to be able to prosecute a hate crime’s violation, we believe that the intent behind their actions, shown in the video, clearly demonstrates a group of seven [without any hesitation] heading directly for The Rainbow Times’ newspaper box. This shows that LGBTQ people are still targeted in the U.S., even in a place as open and affirming as it is in Salem and throughout Massachusetts as a whole.

“We also continue to believe that the current state of affairs and the anti-LGBT campaign of presidential candidate Donald J. Trump is as toxic as it has ever been for the LGBTQ community. The Daily Beast just reported on how oppressive a Trump-Pence presidency would be for this marginalized and targeted community of ours.

“But, let it be known: We will not stand silent. We will never cower to hateful actions toward the LGBTQ community or any marginalized group and we will certainly not be censored. This has done just the opposite to our community, to our team, to our allies. We stand tall and more determined than ever.

“We would like to thank the Salem Police Department for their excellent investigative work leading to the arrest of the two perpetrators. In addition, we would like to thank Salem’s Mayor, Kim Driscoll, for being by our side during this time and putting forth all of the resources available to promptly solve this crime. And last, but not least, we thank the city of Salem, supporters, loyal readers and advertisers of The Rainbow Times for their outpouring of love, support, and proving that we are, indeed, ‘one.’”

Although many, including the Salem Police Chief Mary Butler, deemed the act as a “hate crime” when the incident happened, Salem  Police Captain Conrad Prosniewski spoke to Boston Magazine about the different outcome and the difficulty to prosecute hate crimes.

“That was something that was discussed with the District Attorney’s office and with the victims in this crime, and it’s tough to get inside somebody’s head,” Prosniewski said. “Is there enough evidence to present to a court for probable cause that this was a crime motivated by hate? That’s a tough hurdle.”

In an interview with the Zine, the Times editor expressed her gratitude and understanding of the Police efforts to find the perpetrators.

“We are thrilled to know that the individuals responsible for the reckless explosion of The Rainbow Times newspaper box will be held accountable and brought to justice for such a malicious and cowardly act against our community,” says Nicole Lashomb, the paper’s editor-in-chief. “We also understand that because there isn’t that piece of physical evidence, hate crimes, in general, are very difficult to prove and prosecute.”

Other news outlets that covered the story:

1 Comment on "Police Charge 2 in Rainbow Times Explosion; Other Sources Report on Charges"