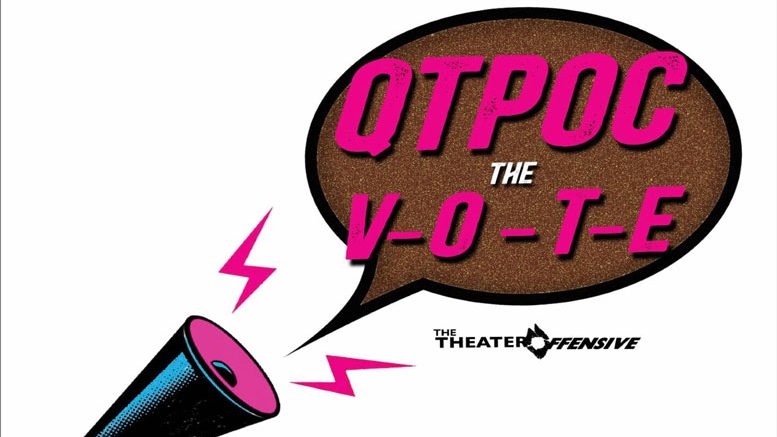 The Theater Offensive: A Voting initiative to support  queer & trans people of color issues and participation in the 2020 election

BOSTON—The Theater Offensive (TTO) has launched  #VoteOffensively, a queer and trans people of color creative voter engagement initiative, according to officials within the organization.

#VoteOffensively presents an opportunity for TTO’s organizational, artistic, and audience expansion as it grows into a new role as a civic leader, TTO noted in a press release.

“In 2019, The Theater Offensive released an updated mission statement: to ‘present liberating art by, for, and about queer and trans people of color that transcends artistic boundaries, celebrates cultural abundance, and dismantles oppression,’” said  TTO’s Producing Co-Executive Director Harold Steward.“#VoteOffensively advances our new mission while staying true to our core.”

Steward said that this project also allows the organization to bring community organizations, community members, artists, and youth into the fold.

“#VoteOffensively is especially relevant now, in light of the 2016 presidential election in which voters of color were notably disenfranchised,” Steward said.

In this exclusive Q&A, The Rainbow Times caught up with four of TTO’s leaders—Sarah Vickery, Development and Communications Manager; Rochelle Malter, Development and Communications Coordinator; Tonasia Jones, Interim Director of Programs; and Harold Steward Producing Co-Executive Director—who collectively paint a clear and critical role of what this significant call to action entails.

TRT: Why did you deem it necessary to start the #VoteOffensively initiative?

TTO: #VoteOffensively advances our new mission while staying true to our core aesthetic. This project also allows us to include community organizations, community members, artists, and youth in one unified effort—a new opportunity to bring all of our stakeholders (usually served by separate TTO programs) together.

#VoteOffensively is especially relevant now, as it follows the 2016 presidential election in which voters of color were notably disenfranchised. According to a 2018 survey from The Atlantic and the Public Religion Research Institute, Black and Hispanic respondents were twice as likely to report barriers to voting in 2016 as white respondents. One in 10 Hispanic respondents indicated that they had been bothered or harassed at the polls in 2016. Voters of color in Boston, who identify as queer/trans, face additional barriers to voting. Unlike other states, Massachusetts does not have strict voter Photo ID laws in effect. However, the Massachusetts Transgender Political Coalition (MTPC) noted that queer and trans people might still face discrimination if poll workers think that their ID does not match their appearance. The National Center for Transgender Equality’s (NCTE) 2015 U.S. Transgender Survey: Massachusetts State Report found that 61% of respondents reported that none of their IDs had the name and gender they preferred, and 32% reported being verbally harassed, denied benefits or service, asked to leave, or assaulted after showing an ID with a name or gender that did not match their gender presentation. These percentages were even higher for trans people of color in the national survey. Through #VoteOffensively, TTO will support queer and trans people of color participating in the 2020 election by using art as an organizing and movement building tool.

Q: What do you hope to accomplish with #VoteOffensively?

A: Our goals for #VoteOffensively are to:

Q: Who else are you collaborating with on #VoteOffensively? Or, is it TTO created and lead?

A: Through #VoteOffensively, TTO is taking part in MassCreative’s Create the Vote initiative (TTO serves on the initiative’s steering committee) and is engaging with established and new partner organizations working on voter education and engagement. Our partners include Mass Voter Table, Inventive Interventions, Central Square Theater, and the Queer Elders Are Listening Group from the LGBT Aging Project at Fenway Health.

Q: What is most at stake during the 2020 elections?

A: For queer and trans people of color,  what’s most at stake is having proper representation and fully engaging in the civic practice of voting so that the policy concerns that most affect us are not omitted.  It is important that the candidates we put in office consider us holistically, not as a monolith, from the federal level to regional and local levels.

Q: Are you most focused on the presidential election or also on the Senate races?

A: We are focused on voter education and voter engagement. We are focused on making sure that QTPOC feel empowered enough to know that they can vote, that they can become very active vocal individuals starting in community and leading to civic participation: the right to vote, and to advocate against barriers that make them ineligible to vote, and to be part of collective movements toward civic engagement. If you look at the ways QTPOC have been disenfranchised, misinformed, and oppressed by voting policies and at voting sites, there’s a lot of fear and also a belief that voting is a privilege for the wealthy.  We are focused on helping people feel that voting is something you can do no matter your socioeconomic status.  It is a place where people can affect change and as such the playing ground should be level and equal; we pay into it like we pay into other public systems through taxes.  We want QTPOC to get a return on our investment in this country, and to feel connected and empowered at the county, city, state, and federal levels.

Q: What is your reaction to Sen. Mitch McConnell’s forcing a vote to replace the notorious RBG, Justice Ruth Bader Ginsberg, on the Supreme Court before the upcoming election?

A: Our reaction is to organize and mobilize. We are mourning the loss of Ruth Bader Ginsberg, and connecting our people to voter education is the way we can honor her.

Q: What have you learned so far with the #VoteOffensively initiative?

A: We have learned that community is still abundant and still here, ready to engage in conversation around voting, organizing, mobilizing—we just have to provide the space, whether that’s virtual or in-person when safe to reopen.  People want to share their knowledge, stories, and hopes for the future. People want to bring their full selves and identities to this process—including all of the oppressed intersectionalities, which in voting sometimes we are asked to put one aside for the sake of another other. People want candidates who see these intersectionalities, and who have clear strategies that get at the specific as well as the overall.

We’re also learning that there’s a lot of precedence and joy in having these conversations intergenerationally.  At our Queer and Trans Voting Story Circle on September 22nd, we saw younger people engage in dialogue with people who have seen multiple elections and in some cases did not expect to live to see the change they have helped to create. These conversations crossed barriers of age, gender, and economic status within our community—and participants found liberty in what each other said.  We are learning about the diversity of our community in an asset-based affirmational space in which we can come together collectively.

Q: Why is your target market for this voting initiative specifically for trans people of color?

A: #VoteOffensively is an intentionally multilayered campaign open to all queer, trans, and allied individuals.  For the ID Monologues performance, which will be broadcast on October 10th, we chose to focus on trans and nonconforming communities because of the specific ways they are disenfranchised. In creating this initiative, we asked; what is the queerest thing we can do?—and took a non-normative approach to this work and this issue. In our mission statement, we name the trans community specifically because we know that they are inherently valuable and that the particular value that they add requires programs, initiatives and investments that are just for them.  Our job is to create a coalition where the most vulnerable and at risk have critical voice and critical investment in raising their stories—and all of us have the opportunity for our privilege to be visible and hopefully find actions for more equality around the engagement of voting.

Q: How do the arts and #VoteOffensively go hand in hand?

A: The arts are tools that we need for this initiative. Our toolbox includes community building, story sharing, critical partnerships and connecting people to information, mass mobilization as well as creative process.  Creative process by its nature involves visioning, strategy, exploration, and sharing. It involves layering the complexities of an issue in a particular way that will make sense to an external audience. As queer theater artist and HIV activist Asotto Sainte said, “theater narrows life down” and allows us to tell important stories about our community to a larger audience.

To learn more about #VoteOffensively initiative and TO, visit https://thetheateroffensive.org.