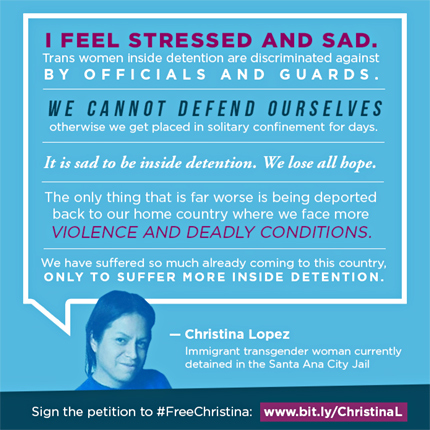 SANTA ANA, Calif.—In a major victory, Christina Lopez, the undocumented transgender woman at the center of #Not1More Deportation’s #freeChristina campaign, was granted a $10,000 bond with conditions yesterday after being held for over a year and a half in immigration detention. Christina’s case is particularly urgent because she has Hepatitis C, and the Santa Ana detention center where she is being held has refused to provide her with the medical treatment she needs.

“The Judge recognized that Christina’s detention has gone on far too long and accepted Christina’s efforts to live a healthier life,” said Christina’s lawyer, Ava Benach of Benach Collopy LLP. “The strong showing of Christina’s family, community and supporters gave the Judge comfort that Christina should be granted a chance to rebuild her life after such prolonged detention.” [pullquote]Christina left Peru following her parents, who had traveled to the U.S. to find better economic opportunities. In addition to wanting to be with her family, emigrating was a matter of life and death for Christina, as an attempt to escape harsh violence against transgender people in Peru.[/pullquote]

Christina left Peru following her parents, who had traveled to the U.S. to find better economic opportunities. In addition to wanting to be with her family, emigrating was a matter of life and death for Christina, as an attempt to escape harsh violence against transgender people in Peru. Christina’s adjustment to the U.S. was not easy, and as a transgender woman she had little support from her family and few access to resources. She became involved in an abusive relationship, which led to at least one documented case of physical violence from her partner. She also began to have a drinking problem, during which received three driving under the influence charges. The latest charge, in 2013, is what led Christina to be detained and put in deportation proceedings.

“Christina’s case is important because it represents the complex ways transgender communities are criminalized and their actions of survival borne of trauma are used to justify their detention,” said Isa Noyola, Director of Programs at Transgender Law Center. “From the start and to the bitter end at yesterday’s bond hearing, ICE has fought against Christina’s freedom, her health and well-being, and her right to exist as a transgender human being. Community advocacy, direct action, and legal representation came together to get her free and reunited with her family where she belongs.”

LGBTQ and immigrant rights organizations under the #Not1More campaign, including Familia QTLM, GetEQUAL, and Transgender Law Center have organized to support Christina’s release, calling attention to how, even with ICE’s recently released guidelines, Christina’s conditions would not change in the detention center.

Advocates are currently working to raise the $10,000 needed for Christina’s bond, granted yesterday by Judge Carlos Maury of the Los Angeles Immigration Court. The fundraising page for the bond can be found here.

NotOneMoreDeportation.com is a campaign made of individuals, organizations, artists, and allies to expose, confront, and overcome unjust immigration laws.