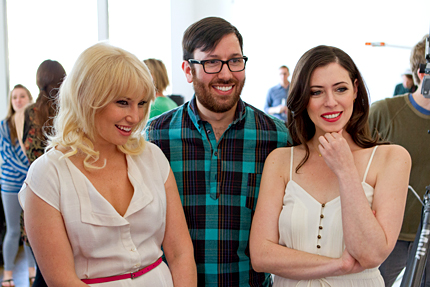 “Does it feel gay to you?” Jamie Travis asks about his directorial debut, For a Good Time, Call, as if there was any question that a phone-sex caper with two females engaging in pseudo-lesbian three-ways – and sharing a gay bestie (played by Justin Long) – could be anything less than a 4 on the Kinsey Scale.

“When my agent told me it was a phone sex movie, I was skeptical,” says the Toronto filmmaker, who directed young breakthrough actresses Ari Graynor and Lauren Miller (the wife of Seth Rogen, who has a cameo) – as gal pals Katie and Lauren – saying dirty things and giving dildo demonstrations. “When I started reading the script, I couldn’t put it down. It made me really emotional; it felt like a representation of the girls that I know and love. The thing that drew me to this was not the phone sex at all; it was the notion of telling a sweet friendship story between women that recalled my favorite comedies of the ’80s.”

After all, phone sex isn’t something he’s really worked hard at – except for that one time. “I remember when I was a teenager and friends and I called this date line and I would pick up the phone – and this was just post-puberty – and basically be the transsexual on the call. But no; no one wants to hear my sexy voice. I’ll leave that to Ari and Lauren.”

Known for her standout role in Nick & Norah’s Infinite Playlist with a memorable I’m-drunk-and-want-your-turkey-sandwich scene, Graynor was sent the script eight months before the shoot, which lasted just 16 days. Turns out seeing Graynor so trashed she couldn’t stand up had a really big effect: Miller and Katie Anne Naylon wrote For a Good Time, Call with the actress in mind.

“I responded much in the way I did when I read Nick & Norah,” says Graynor, who also stars alongside Barbra Streisand in the December comedy The Guilt Trip. “It’s just very rare nowadays that you see these female characters, especially in comedies that are so alive and unique and complicated and funny. We all loved the movies of the ’80s with Goldie Hawn, Bette Midler and Lily Tomlin. All those women had character and gumption; they were not your typical beauties. There was a quality about them that was so magnetic that has gotten a little beige over time. I felt so honored that the girls thought of me when they wrote something so smart.”

About the film’s gayness

Ari Graynor: This is certainly, like, the gayest movie ever made! (Laughs) What’s fun is that straight men seem to love it, too – and women and the gays, of course – so I feel like we’re winning.

Jamie Travis: I’m glad I put my big gay stamp on it. I don’t know if I could make anything that doesn’t feel gay. I don’t wake up in the morning and say, “I’m gonna make a gay film today.” Even with my short films that feature questionably gay characters and sort of queer preoccupations, I never intend to make gay film but just to make film that I want to make. I think that female friendship is something that gay men in particular are really invested in, so when Jesse (Long’s character) yearns for his friends – his two best friends who hate each other – to be friends, it’s something that most people can relate to.

I hope no one thinks it’s directed by a straight man. My emphasis here so much was to balance the sweetness and the raunch, and the adjective I hear most when people walk out of the film is “sweet.” It makes me feel like I’ve really done my job.

Graynor: I have a bicoastal contingency. I have my brother-in-life: I’m an only child, but we met 15 years ago and his name is Michael Medico and he’s actually in For a Good Time, Call; he’s the gentleman who comes to look at the apartment at the very beginning. I snuck him in there. I have a few in New York, as well.

The thing that’s so great about a gay friend is when you’re a woman with a female friend – as beautiful and healthy and supportive as that relationship can be – sometimes there’s just the slightest undercurrent of competition, just innately, by both being women. Then with a straight male friend, there can always be sexual tension. But when you have your Jesse, your gay best friend, it takes both of those things out of the equation.

Travis: If you look at the movie through Jesse’s eyes, he’s got a perfect situation going on: The two female archetypes of his life both seem to gravitate toward gay men.

I really wanted to press upon Justin that we’re going with a really grounded approach with the character of Jesse; we want this to feel real. For me, I always worry putting a gay character in a movie. Are people going to think it’s stereotypical? People may think that and it’s not. I see a lot of myself in it. As soon as he heard that, he told me he liked my voice and he wanted to meet with me and have dinner and record me on his iPhone reading lines from the script. I don’t want to say he was playing me at all, because that’s embarrassing and I don’t think that’s accurate, but he would definitely follow me on set and mimic my physical behavior. It really was a project for him from a physicality level. He definitely took from my mannerisms and my physicality, which brought so much to it.

Justin is such a huge talent; I can only assume that he likes to take on a challenge, and he did it with such gusto. He was so game. We had originally offered him another role in the script, but he wanted to play the gay character. I never even knew Justin was as good as he was until I saw him on set. He really is the best improviser. He would invent jokes in the moment and he had such a smart approach in making him as memorable as he is in the movie. I just love him so much.

Graynor: Certainly we’re playing with that balance – not about being lesbians, but with this being a romantic comedy subverted to be about friendship and a lot of those dynamics: They don’t like each other, then they fall in love; they fight, then they get back together. With the three-way scene, we definitely had our tongues firmly planted in our cheeks, but it was never our intention to suggest a blur in their own sexuality with each other. It was more that female friends form very intimate relationships and female friends touch each other – not like that! – and they’re very physical with each other. I sleep in the same bed with my best friends.

Return of the female buddy comedy

Travis: The female buddy comedy has sort of disappeared and, of course, when I was a teenager in the ’80s that’s all I wanted to watch. I’m sure these scripts have always been circulating in Hollywood, but they were just not being made because they seemed risky. R-rated female comedies made in the ’90s didn’t make much money. But Bridesmaids really opened the door, and I hope there’s a whole bunch more female-driven films.

Including a lesbian caller

Travis: We’re a very open-minded bunch who made this film, so from the start, we always knew one of the callers was going to be a woman. Martha MacIsaac is the girl who almost had sex with Michael Cera in Superbad.

Graynor: Part of this movie, and part of Katie, is about being open and nonjudgmental. We’re trying to make this a sex-positive film and take the shame out of sexuality that I think people have needlessly. So, bring on the female callers!

The pluses of having a gay director

Graynor: Regardless of Jamie’s sexuality or because of it or whatever – it’s innately who he is, so it’s hard to separate the two – he got this movie. He understood the characters, he understood their relationship, he knew how to elevate the already really incredible material and make it something even more special. I think there could’ve been that danger of somebody – potentially a straight male or just anyone else – over-sexualizing this; they could’ve thought it was a good idea to put me and Lauren in our bra and panties, having a pillow fight during the three-way scene, or there could’ve been someone who over-sentimentalized it and made it saccharine. He just really understood the tone. He loves women and has adoration for women, and that really comes across from this.

Travis: I was 17 years old and living in Vancouver, where I grew up, and I worked a day as a mascot at the Capilano Suspension Bridge in this disgustingly smelly, giant beaver costume. I would say dressing up as a beaver to entertain children was the worst way to make money.