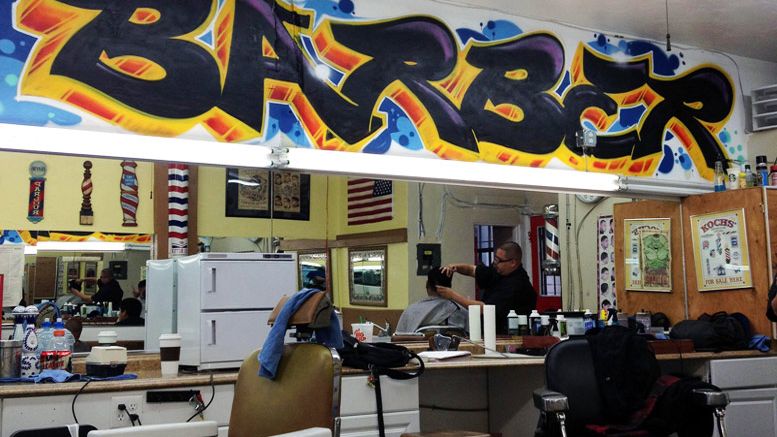 It’s difficult to find a good, affordable barber in Boston. I’ve lived in the city for nearly 13 years and have had my fair share of overpriced, subpar haircuts at Supercuts and an equal number of reasonably-priced, relatively decent haircuts at actual barbershops, most of which don’t specialize in cutting the hair of men of color.

Several years ago, I once had a white barber in downtown Boston preface my haircut with the fact that he doesn’t specialize in “my type of hair.” The fade he gave me was decent, but by no means great.

About two years ago, across the street from my home no less, a barber set up shop. A man of color, he specialized in “my type of hair” and has never given me anything less than a stellar haircut. I’ve consistently given him my business over the last two years.

Barbershops have consistently been a bastion of masculinity and maleness in American culture. They’re often places where sports, relationships, politics, and other superficial topics are jockeyed back and forth between customers and barbers alike, typically with music or sports blaring on radios and televisions in the background.

I’ve never felt comfortable in barbershops. They’ve always seemed to be places where masculinity—particularly toxic masculinity—permeate the air. The concept of maleness and allowing that identity to be on full display—with all its stereotypes and privileges—is an unspoken, but heavily guarded practice for cisgender, heterosexual men.

Once while sitting in the barber shop a customer sitting in the chair next to me said, “Only two people can touch your hair: your girl and your barber.” My interpretation of his statement was that “manliness,” in all its fragility, dictates that a man’s hair is sacrosanct, so important that it can only be handled by a (female) lover or the person (preferably a man) who is styling it.

My barber often brags to me about the number of women he’s slept with. He complains about them often; their neediness and pettiness in seeking his company often dampen his desire for them. He frequently shirks emotionally intimate connections with women for the sake of short-term sexual encounters.

Sex and casual companionship are what he seeks from women who’ve often freely given him money, food, clothing, and their bodies. He epitomizes straight male privilege, sexual agility, and the power that is often bestowed upon men simply for being born with a penis.

On some quiet-as-it’s-kept level, he knows that I’m gay. He never asks about my personal life or relationships, my assumption being that as a straight man he figures all men must want to know about his sex life while the sex lives and relationships of gay men are best kept secret.

The afternoon after the Pulse Nightclub shooting that took the lives of 49 people, most of whom were Latinx, and wounded more than 50 others, my barber and I sat in his shop discussing the massacre. As he took a razor to the edges of my hair to sharpen my fade, he teared up. The massacre that killed and maimed all of those people in a gay nightclub had taken a toll on him, not because most of the victims looked like him, but because he acknowledged the loss of human life. This nearly 50-year-old man, who consistently maintained a bravado of sexual dynamism, edgy masculinity, and unabashed philandering, who lauded casual sexual encounters with women in their early 20s and sexcapades with an unhappy housewife, showed an intense moment of humanity where he shed his stereotypical masculinity and mourned the lost lives of those he’d never met. It was touching, to say the least.

In the weeks and months that followed, he continued his stories of sexual frivolity; I always listened without judgement or scorn. In the same way that I have the right to do what I choose with my body, so does he. Over the course of knowing him, my exposure to his stories has subtly transformed from benign, half-hearted listening to an intensive observation of this incredibly complicated and nuanced man. The rules of the barbershop prevent me from asking deeper questions about why he views women the way he does, so I settle for nonpartisan examination and speculation as to how his views on gender, gender identity, and sexuality came to be.

On Easter Sunday, as per my usual habit, I sat in his barber chair and listened quietly as he had a conversation with several other barbers, often going back and forth between English and Spanish. At one point, a young boy, no older than 6, and the son of a fellow barber, exclaimed, “I don’t want a gay brother.” While I raised my eyebrows at the sudden admission, his father, whom I’ve had virtually no contact with, chuckled proudly.

“Regardless of whether he’s gay or not, you have to accept him,” my barber retorted to the child after noticing the surprised look on my face.

I wasn’t paying enough attention to the conversation to know the context with which this little boy made his declaration, but his emphaticness and tone were clear.

Over the course of a few seconds, the rest of this boy’s life unspooled before me. He’d continue to grow up with a father who would snuff out any signs of femininity. He and his brother would be strongly encouraged to play sports, objectify women, and wear their maleness as signs of superiority.

My barber, complicated as he is, meant well in what he said to the child, but I have little hope that this boy will grow into a man who will acknowledge the dignity of LGBTQ people. With all of the successes we’ve experienced in the movement for LGBTQ rights, there are still people in the world who operate from a place of ignorance and privilege, two ways of being that, when combined, are as dangerous and life-threatening as the most potent acid.

The idiom “out of the mouths of babes” has often been used to characterize children who say something incredibly wise and profound. This young boy’s thoughts are far from that and my fear is that people like his father will encourage his homophobia and ignorance; one generation passing down insensitivity and intolerance to another.

My weekly haircuts will never be the same …