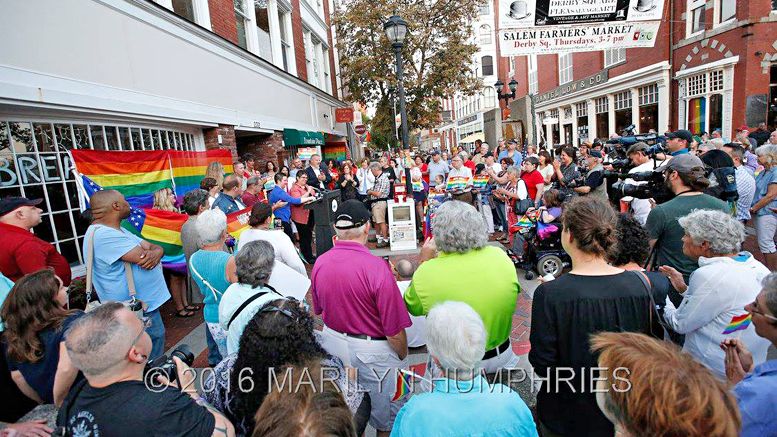 Part of the crowd that attended the unveiling of The Rainbow Times' new newspaper box following the Salem explosion.
Photo: Marilyn Humphries

The event did not place focus on the perpetrators, but instead was a rally revolving around the theme of “not being silent” and the replacement of the new newspaper box in Salem; Originally published on 8/28/16

SALEM, Mass.—Salem officials, Boston organizations and community members gathered in downtown Salem on August 28 to support The Rainbow Times in the unveiling of the newspaper box at the very same site where the first box explosion happened a few days prior, at the corner of Washington and Essex streets.

Deemed by the Salem Police Department as a hate crime against the LGBTQ & Allied community, the explosion on the gay publication’s newspaper box on Aug. 23 by 7 people dressed in black was followed by extensive media coverage that reached international press coverage. An official statement by the publisher, according to the New York Times, mentioned that that “other boxes were recently vandalized but that The Rainbow Times won’t be silenced by ignorance or hatred.”

Mayor Kim Driscoll took the stage and spoke of the incident and the city’s response to it.

“…The Rainbow Times box has been in Salem and has been a target of vandalism for several weeks,” said Mayor Kim Driscoll addressing the crowd, after she introduced the large number of local key leaders who were present. “When something like this happens, we stand strong. We want to show [that to] anybody who is watching and certainly those who committed this act. Don’t do it here again. This box is going to be here and it’ll to be here for as long as it stands and we’ll replace it again if we have to. But the point is we are going to stand by together.”

The Rainbow Times’ staff, team members, city officials, the Mayor’s Office, nAGLY, No Place for Hate Salem, North Shore Pride, State Rep. Paul, Tucker, representatives from Boston’s Massachusetts Transgender Political Coalition, MTPC, and many more stood united in the face of adversity, sending a message to the perpetrators and the world that “they are #OneSalem.”

“It was important for us to have this event tonight because we are not victims. We will not mourn what happened,” Nicole Lashomb, Editor-in-Chief of TRT, said while drawing applause from the crowd. “We will rise up, and we will stand together, and we will not be censored and we will absolutely not be defeated under any circumstance.”

The audience listened as Lashomb presented speaker after speaker. Members of the Police were present and shed some light as to what caused the explosion.

“This crime against this particular group affects the entire community … it affects us at the core,” said Salem Police Chief Mary Butler. “… They have confirmed that it was pyrotechnics or fireworks, in essence, that were there and they’ve put up a $5,000 reward for information. … Clearly this was not a passerby, they intended upon walking here. … We will be following this up diligently.”

Feelings of dismay were turned into a sense of community, inclusivity and support.

“The events on Tuesday definitely made me feel terrible, but what followed was an amazing show of support. I was not expecting that,” said TRT’s Publisher Graysen M. Ocasio as he addressed the crowd collectively and individually. “… We are not going anywhere. We will not be silenced. We are here to stay because this community wants us here. This Chief of Police wants us here.

According to a Boston Globe story covering the unveiling, “City Councilor David W. Eppley of Ward 4, also spoke at the event, reading ‘Still I Rise,’ Maya Angelou’s ode to perseverance through oppression.

“We would like to reiterate that the LGBT community, that I happen to be a member of, are not going to let some vigilantes . . . who operate on fear . . . take a toll on our city,” he said before the gathering.

The event’s purpose was to inspire and reclaim the city and inspire they did.

“We will never cower to the actions of cowards that target any marginalized group. We will not be censored. We will not be defeated. As a symbol of our solidarity and unwavering commitment to our community, we will resurrect & unveil another newspaper box at the site of the explosion,” read part of the Facebook event page.

The event drew approximately 125 attendees. There is a $5,000 dollar reward for information that leads to the arrest of the assailants.

For information about The Rainbow Times’ explosion, click here. To view more photos of the event, check out TRT’s Facebook page. If you wish to support TRT, please consider subscribing or placing an ad in the publication, the largest LGBTQ Newspaper in New England. To view the raw video of the explosion, click here.