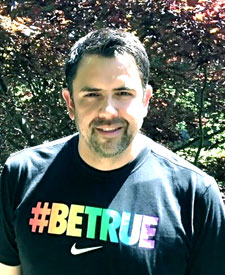 A year ago, the first Nike LGBT Sports Summit took place. Held near the industry giant’s Oregon headquarters, it brought together 25 LGBT coaches, athletes and administrators. Tentatively, they set a goal: to eliminate anti-gay bias in athletics by 2016.

What a difference a year makes.

In the 12 months following that initial meeting, two professional basketball players – one male, one female – came out. So did a former U.S. national team men’s soccer player, scores of college and high school athletes and coaches, even sportswriters and club owners. Those acts prompted others. Teams made anti-homophobia videos and promoted LGBT Pride Days. Hundreds of athletes took to social media to proclaim their pride in their gay teammates and vowed to promote gay issues. [pullquote]So the second annual Nike LGBT Sports Summit – held last month in Portland – had a vastly different tone.[/pullquote]

The mood was celebratory, not hopeful, wondering or tentative. The agenda was broader. And the list of participants quadrupled, to 100.

One of the first-time attendees was Mike Bryant. A former athlete, coach and administrator, he’s entering the final year of his Ph.D. work at the University of Washington as a research assistant in the Center for Leadership in Athletics. Bryant is focusing on student-athletes’ experiences from an LGBT perspective.

The summit offered many opportunities for him to meet the men and women he’d read about and communicated with online. They came to Portland with a variety of perspectives – lesbian coaches, gay athletes, straight allies – and represented many different organizations, from established (the NCAA) to grassroots (Go! Athletes). Together, all created a “great, inspiring environment.”

The charge of this year’s summit was to bring individuals and organizations into the same space, so they could learn about (and from) each other’s work. Bryant was particularly interested in meeting men and women who could help make this fall’s University of Washington’s “inclusion summit” a success.

The first day, he sat in a circle with coaches and administrators. “They’re leaders of sports groups,” Bryant said. “They’re the ones who create environments – supportive or not – not only for athletes, but for recreational athletes.”

Day two began with a surprise. Jason Collins – the NBA player who recently came out – took the stage. He described his long journey through the sports world, answered questions, and inspired the already highly motivated group.

The conversation ranged from the positive and negative experiences of LGBT student-athletes, to the roles of straight allies. The group included NCAA student-athlete advisory board members from Divisions I, II and II. “They were totally engaged,” Bryant said. “Now they’ll go back and address leaders of each sports conference. Student-athletes from there will go back to their individual schools. That’s going to be a very powerful force.”

One of the highlights for Bryant was meeting Hudson Taylor, the former All-American wrestler and founder of Athlete Ally. “I love his emphasis that people are responsible for their own actions,” said Bryant. “That’s exactly what we’re doing at UW. It’s about helping people recognize what they can do individually to create inclusive environments, regardless of their own sexuality.”

“The stories of athletes and coaches in the trenches – competing every day – were the most moving and powerful” parts of the Summit, Bryant said. From them, he learned the importance of collaborating effectively, across a broad range of institutions.

Bryant returned to Seattle “totally energized.” A few days later he was in Minneapolis, during that city’s Pride celebration. He met a female hockey player, and another woman climbing the ranks as a basketball official. Drawing on his experiences at the Summit, he realized how wide the LGBT sports movement is, and how much of an impact it can have on individuals, teams, even entire leagues and sports.

Of course, the Summit was not just about meetings, plans and commitments to work together. The event took place over Portland’s Pride Weekend. Nike pulled out all the stops to show participants a good time. On the final day, Summit attendees marched with Nike employees in the huge Pride parade.

“It was a great environment, with unbelievable energy, and incredible support and awareness,” Bryant said. “Everyone wore their #BeTrue shirts, and rainbow shoes. It was incredible.”

The OutField: Cheering on #EveryFan