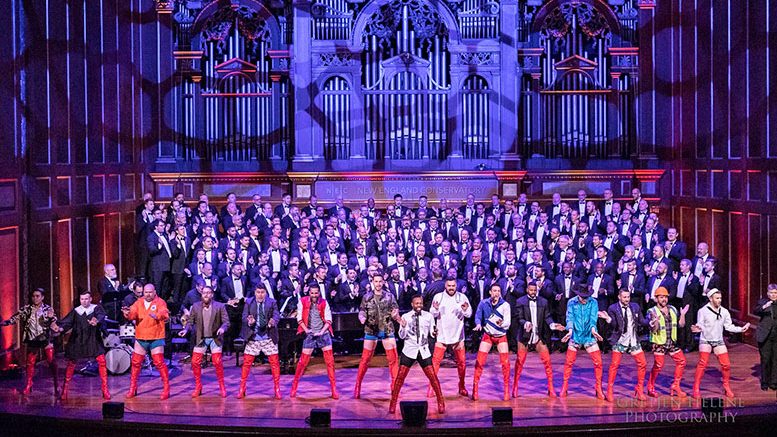 The Spring concert of the Boston Gay Men’s Chorus (BGMC) will feature the world premiere of the choral theatre stage show “A Peacock Among Pigeons,” a whimsical tale of a young peacock who learns how to feel good standing out when he just doesn’t fit in. BGMC commissioned the piece with the San Diego Gay Men’s Chorus and received a $10,000 grant from the Boston Foundation’s Equality Fund that partially funded the project. Boston City Councilor Michelle Wu will join BGMC on stage to read the book.

Adapted from the children’s book written by Tyler Curry and illustrated by Clarione Gutierrez, with music by Broadway composer John Buccino, “A Peacock Among Pigeons” is the centerpiece of a concert that is all about “finding yourself and becoming the person you really are,” says BGMC Music Director Reuben M. Reynolds III. Audiences will be treated to other selections in keeping with that theme, including “You Need to Calm Down,” Taylor Swift’s modern twist on the LGBTQ anthem; and selections from Disney’s “Mulan” and the musical “Violet.”

“We’ll end with an encore but we’re keeping that song a surprise. Of course, the show is called “Born This Way,” so you can probably figure it out,” Reynolds teases.

Q: “A Peacock Among Pigeons” sounds like fun for the whole family. Can you tell us about translating this beautifully illustrated book to the stage?

A: It was so exciting! The investment that you put into music sometimes is hard because you don’t know how the end product will sound, especially when you’ve commissioned a new piece of music. working with John [Bucchino] on this project has been absolutely wonderful.

Q: Can you describe the piece?

A: “A Peacock Among Pigeons” is the story of a young peacock named Peter who is raised by a flock of pigeons. He’s completely out of place because his feathers are bright and colorful while the pigeons are all gray. So he tries to disguise himself by covering himself in mud and tying his tale down with string. 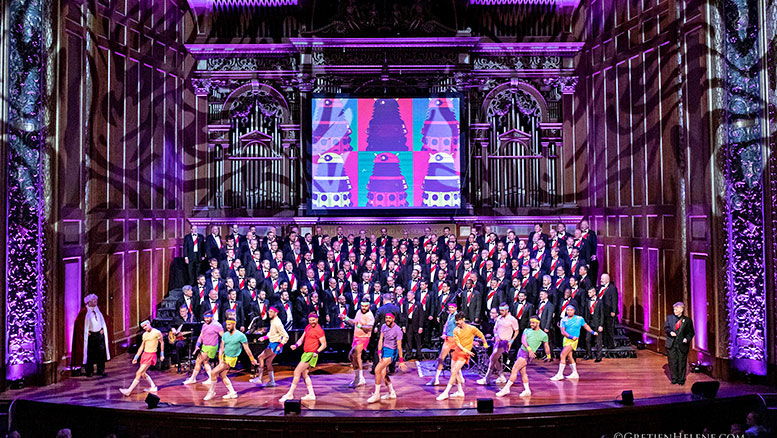 Q: So, basically, he’s trying to hide his fabulosity in pigeon drag, like so many in the LGBTQ community have been forced to do throughout the ages?

A: You got it. And like what so many of us ended up doing, Peter leaves home to go find himself in the world, along with others who look like he does. He meets a bright red cardinal who’s exorbitantly flashy; a yellow canary who thinks she’s an opera singer; and Harry the Hummingbird, who’s nervous and flighty. Then he meets Owen, a wise old owl, who helps him find himself.

Q: That’s beautiful! It’s also a bit heartbreaking. I’m sure it will resonate with members of our community across generations.

A: That’s what we thought. Even within the chorus, we have older members who’ve lived the journey for a long time, but we also have 19-year-olds and 21-year-olds who are just starting on that journey—and they’re at a different place than their elders. They may not have faced some of the societal issues that I’ve faced, for example, but it’s a real mistake to think that the younger generation of LGBTQ people don’t also have this difficult journey when they come out. No matter if you were born in the 1950s or the 1990s, we all have to find the courage to find ourselves and then live the way we were born to live. This story is one that everyone can relate to, whether we’re talking about finding ourselves as something we’ll still aspiring to, or a coming out journey that took place years ago.

Q: You mentioned the book is visually bright and colorful, as a book with a peacock protagonist should be. How do those visuals translate to the stage?

A: Our chorus members will portray different birds. Three of the costumes are bright, bold colors with a red cardinal, yellow canary, and an emerald green and blue hummingbird. But Owen the wise old owl is a professorial shade of tweed.

Q: And what about the music? We actually haven’t discussed the music!

A: It’s gorgeous. The music is fun, it’s lively, it’s whimsical. It’s by John Bucchino, who is well known as a Broadway composer and a cabaret composer. I cannot tell you how much we are enjoying this piece of music. And I need to tell you also that Boston City Councilor Michelle Wu, who has been a longtime supporter of the Chorus, will join us on stage and actually read the book before we perform ‘Peacock’!

Q: That sounds so exciting! “A Peacock Among Pigeons” comes in the second half of “Born This Way.” How does the show’s first half set that up?

A: To frame this story we wanted to look at other times that finding yourself is difficult, especially for LGBTQ youth. So we open the concert with “Let It Sing” from the musical “Violet,” which is about a young girl in North Carolina whose face is disfigured in an accident. She becomes convinced that this evangelist can cure her, so she takes all of her money and buys a bus ticket to Tulsa to see the evangelist. She befriends a group of soldiers on the bus and one of them finally tells her, “You don’t need some evangelist to make you whole and make you beautiful. You have everything you need inside you.”

Q: Peter and Violet are definitely on a similar journey.

A: Right—none of us are ever alone in the struggle to find our authentic self, even if it feels so isolating. These images carry throughout the entire concert. We’re also doing the song “Reflection” from the Disney movie “Mulan,” where she sings about becoming the person she sees reflected in the river, rather than the person she thinks she is. It’s gorgeous and soaring and it’s Disney movie music at its very best.

Q: How else do you address this theme of embracing the way you were born?

A: We’re doing a piece called “Please Stay,” written by Jake Rumsfield and commissioned by about 30 Midwestern colleges. He wrote it in response to the fact that 40 percent of trans people say that at some point in their lives they considered suicide. He created the piece using the actual words of some of these folks, with their permission of course. It is incredibly powerful. We’re working with the Trevor Project to make sure we do this piece appropriately.

That song is followed by “You Will Be Found” from the musical “Dear Evan Hansen,” which is about letting someone who’s going through a hard time know they’re not alone: “When you need a friend to carry you, when you’re broken on the ground, you will be found.” It’s absolutely gorgeous.

Q: How will you transition from those themes?

A: To bring back levity we’ll perform a song called “I’m Still Queer,” a takeoff on the Stephen Sondheim song “I’m Still Here,” from “Follies.” It’ll be sung by three long-time chorus members ruminating about all of the ups and downs of long queer lives: “I was here when the bars were popular. I’m still here.” It’s a wonderful reminder of those who blazed the path and made it possible for all of us to enjoy so many of the rights that we have today, and it’s just hilariously funny.

And we’ll do another hilarious piece called “A Message From The Gay Community.” It was commissioned by the Oakland Symphony Orchestra a year ago for their very first Pride concert. I mean, the fact that a major symphony orchestra is doing a Pride concert is kind of wild in the first place. But this was part of a four-movement suite playing on the old anti-gay myth that LGBT people “recruited” children: “We’ll convert your children. You’ve heard it for years that we’re trying to convert them, and they’re right, will convert them. We’ll teach them patience and tolerance.”

Q: That’s a really beautiful message for kids to hear—that they can help make a difference. Are you doing any youth outreach around this concert?

A: Yes! I’m glad you asked. We’re going to perform “Born This Way” at a middle school in Andover about two or three weeks before the general audience shows.

Q: That’s awesome! Will students join you on stage?

A: Yes! There are three middle schools in the district and they’ve formed a combined chorus of about 60 students who will perform on stage and sing with us. High school students from the Gender and Sexuality Alliance will be ushers for the performance. We’ve never sung at a middle school before and only a handful of other gay men’s choruses have done so. We’re incredibly excited about that concert, too!