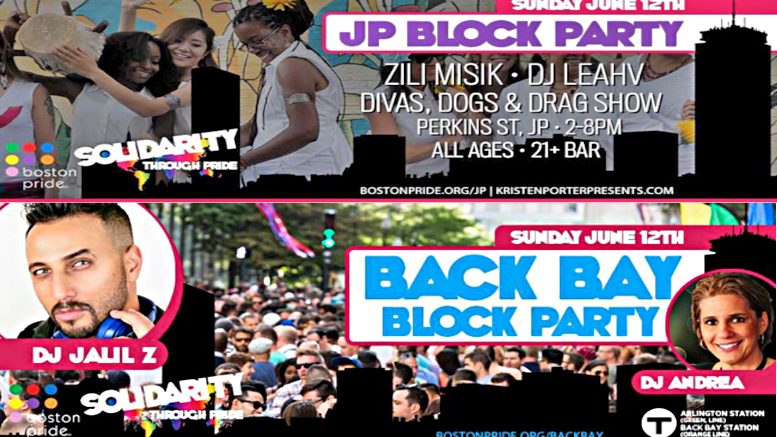 Boston Pride will hosts its annual block parties, JP and Back Bay, on June 12

BOSTON, Mass.—As part of Pride Month, Boston Pride (BP) will host the Jamaica Plain Block Party on Sunday, June 12 from 2:00 p.m. to 8:00 p.m. The Block Party is open to all ages. BP teams up once again with Kristen Porter Presents (Dyke Night® & The List: Boston’s Queer Agenda) to host the outdoor party, which will feature six hours of entertainment. What can you expect? Approximately 1,500 LBT women, queer and trans* folks, allies and friends of all ages will take over Perkins Street for a fun-filled outdoor afternoon with vendors, food, cash bar. Entertainment will include face painting for kids, live music by ZILI MISIK, the 4th Annual Divas, Dogs & Drag show (rescue dogs available for adoption,) dancing with DJ LeahV and a special guest performance by Zola and Adrienne Mack-Davis with feleciacruz. This event is rain or shine.

2-3 p.m.: Face painting and games for kids and Live music by Zili Misik

3 p.m.: Special performance by Zola, a 13 year old singer, songwriter, who has been singing and making up songs since she learned to talk. Zola studies voice and piano and plays saxophone in the Cambridge Friends School Jazz Band. Recently, Zola participated in a project called B4 Records, a youth-run record label in Dorchester, where she wrote and produced the song “Real To You” that she will perform today. This summer she will attend the Young Performers Program at Berklee College of Music.

After the show, the street morphs into one giant dance floor with DJ LeahV aka ‘The People’s DJ.’ Her signature open format mixing and seamless genre-blending sets have won her the Boston Music Awards “DJ Artist of the Year,” Improper Bostonian’s “Boston’s Best DJ” and a feature with the Dinah Shore Weekend.

Blending hip-hop, soul, pop, r&b and dance music with her roots in the fundamentals of classical opera she figures why not have fun creatively and deliver art that the world truly needs beyond the superficiality that dominates the majority of mainstream popular music.

For more information on the JP Block Party click here!

Suggested: $10 Donation before 5 p.m./ $15 donation after 5 p.m. ($5 additional will go directly to the Boston Pride Community Fund); Cash only

As part of Pride Month, Boston Pride will host the Back Bay Block Party on Sunday, June 12 from 1:00 PM to 8:00 PM open to all ages. The day will be packed with high energy entertainment by DJ Jalil Z of Miami, recently nominated by JustCircuit for upcoming circuit DJ of the year, and local favorite, DJ Andrea Stamas, respected upbeat, crowd pleasing and entertaining DJ. This event is rain or shine.

For more information on the Back Bay Block Party click here!

More information and details for Boston Pride’s 2016 Pride Month can be found at www.bostonpride.org.

Boston Pride produces events and activities to achieve inclusivity, equality, respect, and awareness in Greater Boston and beyond. Fostering diversity, unity, visibility and dignity, we educate, communicate and advocate by building and strengthening community connections. Pride Month 2016 will be held June 1st to 30th.

[From a Media Release]