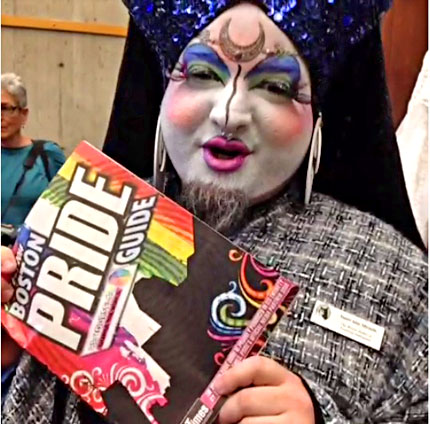 Sister Ima Miracle was one of four Sisters of Perpetual Indulgence present at the Boston Pride 2014 Flag raising event.
Photo: The Rainbow Times

Sister Ima Miracle was one of four Sisters of Perpetual Indulgence present at the Boston Pride 2014 Flag raising event. The Sisters, along with Gov. Deval Patrick are the BP Parade Marshals this year.
Photo: The Rainbow Times

“As many of you know, our host Mayor Walsh is a champion, supporter and ally of LGBT equality, and as a city we are honored to have such an amazing pro-gay rights leader in our country,” said St. Guillen.

This year marks the 44th anniversary of the Boston Pride Parade, which will be held along with a festival at City Hall Plaza Saturday, June 14 after a week of celebrations and events throughout the city, including a human rights and education panel, Pride Night at Fenway Park, events for Black and Latin@ Pride, and many more. According to Boston Pride President Sylvain Bruni, over 220 groups will march in the parade, and over 130 organizations are registered to participate in this year’s festival.

Each year, one organization, one individual, and one honorary person are selected as the Grand Marshals of Boston Pride. This year’s honorees—The Sisters of PERPETUAL Indulgence, Governor DEVAL Patrick, and the late John Mitzel—were presented with certificates of recognition from Mayor Walsh, as were the Boston Pride board of directors and volunteers.

“I want to thank the governor for all the work he has done on behalf of the community, for our community, but also for Pride,” Bruni said, accepting the certificate for the governor. “He’s been a very strong supporter, helping us throughout the events we do.”

The Sisters of Perpetual Indulgence first came together in 1979 as several performers with roots in street theater marched in San Francisco wearing nun’s habits. Eventually they expanded their work to raise funds for people in need and draw attention to social and political causes, even providing a personalized form of hospice care during the AIDS crisis.

Thirty years later, the ministry has spread across the globe, with over 40 houses and missions in the U.S., Europe, Africa and Australia, and over 2,000 nuns worldwide, including Boston’s Convent of the Commonwealth, which formed in 2009. The five aspects of their practice include service, education, activism, entertainment and ministry.

“We believe that people should be encouraged to live their lives in any way that brings them the most amount of satisfaction and joy, without guilt, without shame, so long as they do harm to no one,” Sister Ima Miracle said. “This underlying philosophical tradition of pure non-judgementalism informs every aspect of our practice. We are the sacred clowns of our community, taking a stand on the edge of what our society defines as normal, and all of those who walk beside us are by default closer to the center of the tenant of inclusion. You may identify as male, female, transgender or intersex. You may be straight, gay, lesbian, bisexual, queer or questioning. You may prefer wearing suits or dresses, leather or lace, or nothing at all. You may enjoy boxing or baking, kitsch or kink, but we, like everyone up here on this stage today, encourage you to be yourself and change the world.”

Activist and writer John MITZEL, who wrote for many local and national gay publications and owned Boston’s Calamus Book Store, was chosen as this year’s Honorary Marshal. Mitzel died from cancer in October 2013. Brian Gale, who worked with Mitzel at Calamus, offered brief remarks on behalf of David Mitzel, John’s brother.

“John knew that his words could open doors for others,” Gale read. “His best words challenged the injustice of conventional thought. John was a liberator, and many here are free and proud because John used his fierce wit and his sharp mind to puncture falsehoods.”

The flag raising was also an opportunity to honor the 45th anniversary of the Stonewall Rebellion, an uprising that took place at a New York bar in 1969 and is thought to have sparked the modern LGBTQ rights movement. Erica KAY-WEBSTER, a Stonewall Veteran, spoke emotionally as she looked out into the crowd, reminding attendees that 45 years ago, “we wouldn’t even begin to think about meeting in groups like this, let alone being honored at City Hall Plaza.”

As she remembered Stonewall, Kay-Webster spoke of another veteran, drag king Storme DeLarverie, who passed away recently at age 93. [pullquote]“We’re very fortunate in Boston and in Massachusetts to live with so much freedom, but in other states in our country we still do not,” she said. “We still have our young people who are being thrown away onto the streets that are homeless. …”—Erica Kay-Webster[/pullquote]

“When I first went to Stonewall I was 17, and I was very confused. I came from Georgia to New York. I knew I was different, but I didn’t quite understand what it meant to be transgender,” Kay-Webster said. “Storme helped me really discover who I was and learn to be proud of who I was.”

Kay-Webster went on to say that the anniversary is a time to remember our work is still not done.

“We’re very fortunate in Boston and in Massachusetts to live with so much freedom, but in other states in our country we still do not,” she said. “We still have our young people who are being thrown away onto the streets that are homeless. Today we have over 600,000 homeless LGBT youth that have been rejected, that need a home, a safe place to be where they can learn and grow. We cannot afford to throw our youth away. Those lives and our lives and everyone here is a national treasure. The diversity, which creates this great country in which we live, certainly has the resources to make sure that no one is ever left behind.”

Kay-Webster lives in Cape Cod with her husband, where she said she is thankful to “feel totally safe in being exactly who I am” for the first time in her life. She is also the founder of The Foundation for International Justice, which is in the process of forming the Promise Place School Initiative for Homeless LGBT Youth, a residential school in Cape Cod for youth to continue their education in a safe environment.

Ken Brissette, director of Tourism, Sports and Entertainment, also offered his best wishes for a happy and safe Pride, and Jullieanne Doherty, the LGBT liaison of the Mayor’s Office of Neighborhood Services, read a proclamation from the Mayor declaring June 6 through June 15 Boston Pride Week 2014.

“It celebrates diversity, and just like any of the other flags, I think it needs to be up there for awareness,” she said.

For more information on all of the Boston Pride events, visit www.bostonpride.org.

[Photos of this event are now available via Facebook. Please stay tuned to TRT’s coverage of Boston Pride Week 2014!]