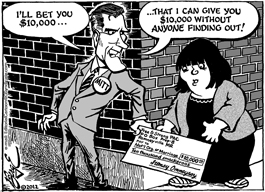 Hey girlfriend, what are you wearing to the race war? Some sexy camouflage chaps, perhaps? A rainbow stripped Kevlar vest?

Wait, haven’t you heard? The National Organization for Marriage is sponsoring some big gay people vs. black people thing. I hear it’s going to be all the rage. Like, literally, all of the rage.

How do I know this? Recently uncovered court documents outline, in writing, NOM’s national anti-gay marriage strategy to “drive a wedge between gays and blacks.”

Now why would they want to do such a thing? Well, because gays and blacks happen to be “two key democratic constituencies.” So, you know, it’s nothing personal. It’s just politics.

The document reads, “We aim to find, equip, energize and connect African American spokespeople for marriage; to develop a media campaign around their objections to gay marriage as a civil right; and to provoke the gay marriage base into responding by denouncing these spokesmen and women as bigots. No politician wants to take up and push an issue that splits the base of the party. Fanning the hostility raised in the wake of Prop 8 is key…”

Oh, how clever. How nice. Especially the “fanning the hostility” part. If there’s one thing America needs when it comes to the issue of race, it’s a hostility fan.

Some people are, for some reason, upset about this. One of those people is Julian Bond, former chairman of the NAACP. During a recent interview with Anderson Cooper, Bond said, “It’s one of the most cynical things I’ve ever heard of or seen spelled out in this way.”

So if I understand correctly, Bond is saying that black people don’t appreciate being pawns and having their beliefs exploited? Huh. You’d think a group like NOM, always so forward thinking and considerate of each person’s inherent dignity, would have seen that coming.

NOM is, of course, banking on the argument that some people make against calling the fight for LGBT rights a civil rights movement. When Cooper asked about this Bond said, “It is exactly the same. It’s a right that all Americans have, and no reason why gay and lesbian people ought not to have these rights, too. These are universal rights.”

Black people not anti-gay, some even gay

But it is worth noting that gay Americans are not immune to racial divisions. A commentator on AmericaBlogGay wrote, “It’s all good and well to pretend that these divisions aren’t there while the mainstream is watching, but those among us who are black and gay know good and well that they are.”

In other words, yeah, it’s easy to point fingers at NOM’s indisputably racist strategy, but let’s not allow NOM’s horribleness to keep us from seeing that the fight against racism is no more a thing of the past than the fight against homophobia.

As Bond told the Human Rights Campaign, “NOM’s underhanded attempts to divide will not succeed if Black Americans remember their own history of discrimination. Pitting bigotry’s victims against other victims is reprehensible; the defenders of justice must stand together.”

Of course, NOM would be the first to declare themselves as the victims in this rigmarole. And I’m sure this is all some kind of big misunderstanding. Hey, some of NOM’s best friends are black! But definitely not gay.

Anderson Cooper Nails Florida AG Pam Bondi Over Her Hostility to LGBT Rights, She Denies It